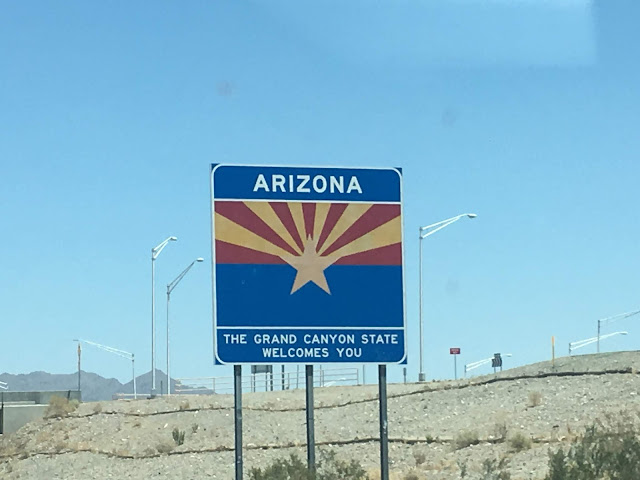 A year ago my buddy Joel invited Kelly and I to fish with him for a week in his home state of Pennsylvania while his boy was away at skateboard camp there.  It was such a success we planned to do the same the following year.  So for past year we researched new waters, tied flies and waited for the day to return. With a month away til our trip and tickets bought and anticipating growing, we got some distressing news that Joel may put an end to the trip as his boy wasn't doing well in school.  The boy was given an ultimatum get his act together or he wouldn't be going to camp.  Within a couple weeks Joel gave us the bad news and said he and his boy won't be making the trip and we were more than welcome to use his deposit for the Feathered Hook if we so chose.  We decided against it and went ahead with our own plans for an alternative trip.  Kelly had always wanted to check out Ouray, Colorado after seeing some pics on the internet five years ago.  So a road trip was planned around making it to the town.  In addition to Ouray Kelly wanted to fish New Mexico.  I looked into want I wanted and for me I wanted to try and get as many unique species as possible.  Size was not a primary consideration.  As we would have to pass through Arizona I looked into what fishing possibilities existed in the Grand Canyon state.  After looking into it I decided I wanted to get an Apache and Gila Trout, two native fish that only are found within these two states.  In addition, the Rio Grande and Colorado River cutthroats were going to be my primary targets. 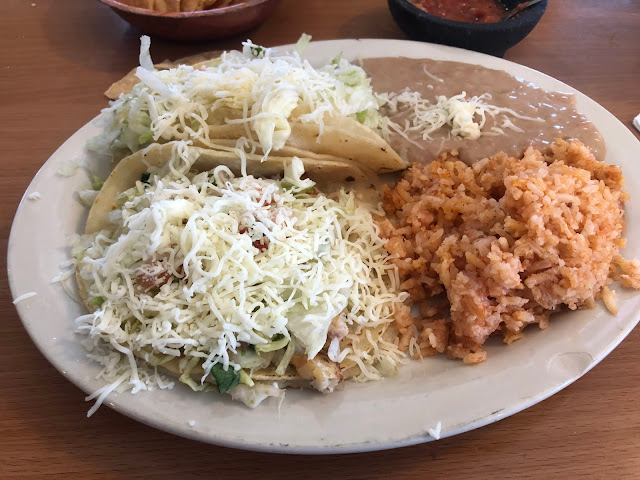 Day one was always intended to be a travel day. With plans changing last minute for a slightly earlier departure time there was a small chance to wet our lines in Arizona.  I arrived at Kelly's place to start packing his truck with our gear.  When Kelly said just throw my stuff willy-nilly in the bed, I instantly shut that down.  When it comes to car camping I am a bit OCD.  I need things somewhat organized as we'll be spending alot of time trying to access things as we go.  After loading the truck we were off and along the way we needed to stop by for lunch El Mexicali Cafe in Indio for some fish tacos. 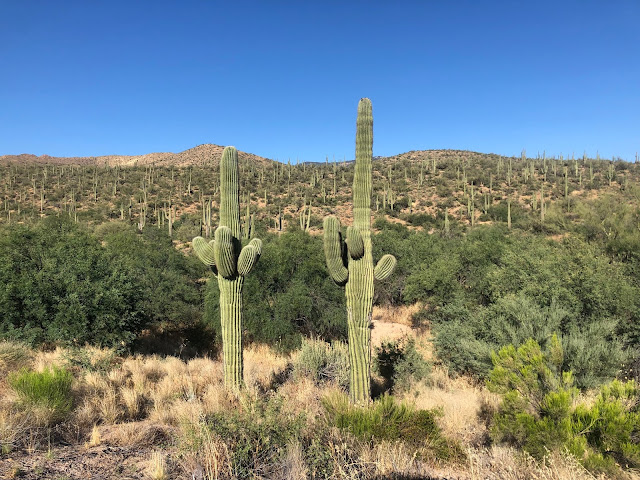 At around 5pm we made it Phoenix to stop in at Cabela's for our license, intel and other supplies.  We asked the fly shop how the Apache fishing is and he gave us some info and told us to use small dries an dropper system.  I asked if there were any good fishing on the way to the destination, he said it wasn't worth a stop and we should just head to the campground.  We still had another four and half hours before we made it to our destination.  After a few hours of driving we were still a hour or so away from our goal before we hit a wall and needed to stop for the night.  I checked Siri for any nearby stops and found one.  We drove up to it in pitch darkness and made camp. 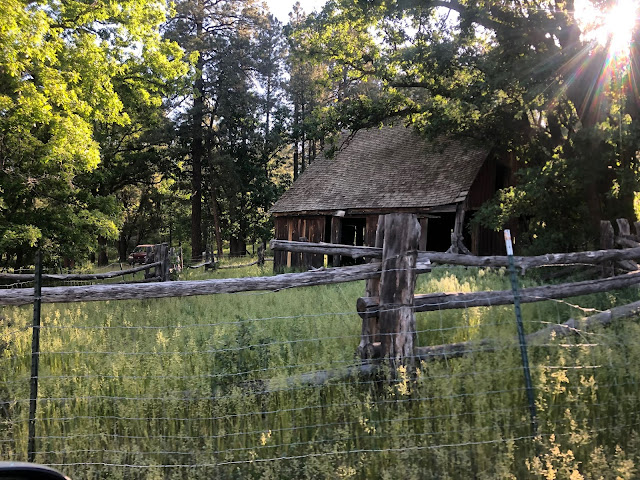 When we awoke the next morning, we were pleasantly surprised and how nice a campground we selected.  It even had some old relics from the early 1900s, this barn and a nearby ranger station are preserved nicely. 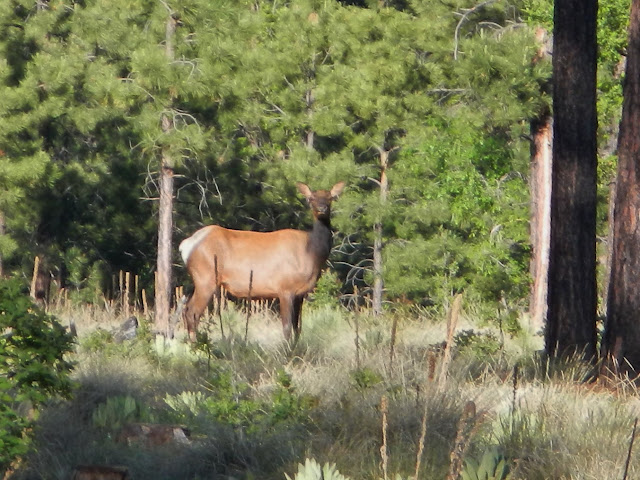 The drive out and toward our fishery provided two separate sightings of cow elk pairs.  On the way we passed another watershed that was known to hold Apaches so we stopped an took a look.  It was small and brushy but looked promising so we rigged up and took to the stream. 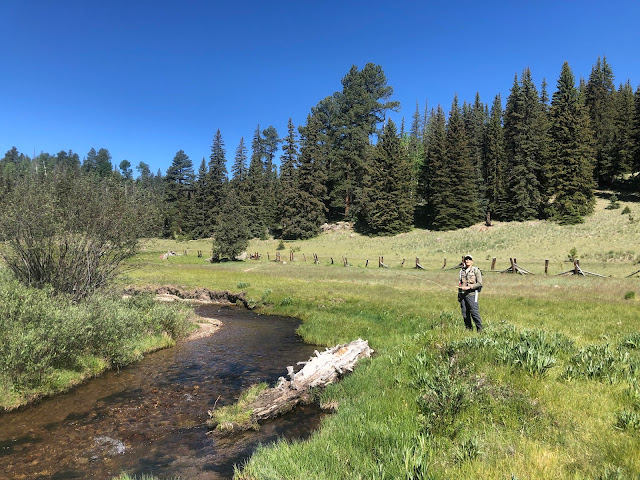 We didn't get too far before deciding to head back to the truck and fish our original destination.  We still had about an hour before we would reach it though.  Along the way more elk sightings and some stunning scenery. 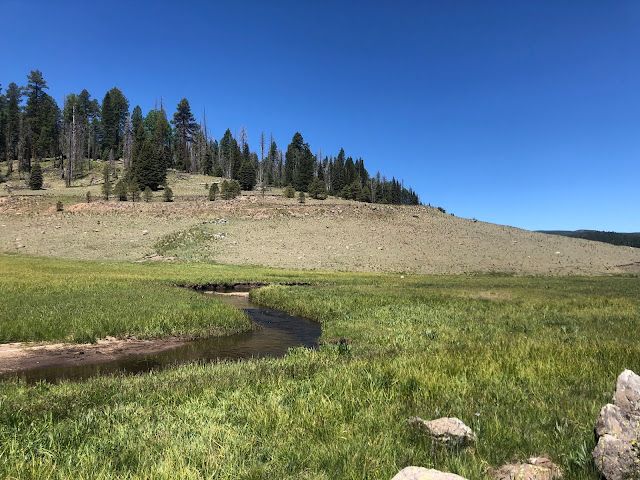 In time we made it to our river.  I still wasn't quite sure if we were in the right spot for apaches though.  I was going on some vague info on a website so I had to make my best educated guess as to where and what part of the river we should start.  The river looked much like a smaller version of the Upper Owens. 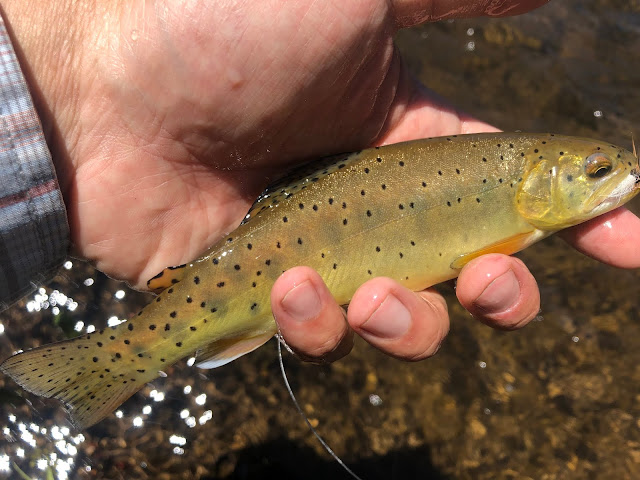 At first we decided against putting on wading boots as the river didn't look very wide.  After we hiked and fished a bit we came to the conclusion to go back to the truck and put them so we could access better fishing angles and cross the stream when needed.  I saw my first rise very early near log jam at the end a large pool.  It never rose again and I couldn't get a good drift on it.  Going on the advice of the Cabela's employee, I started small with a size 18 dry and a similar sized nymph both which one I've already forgotten. 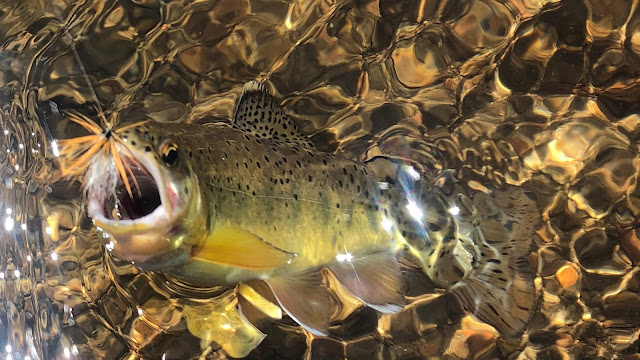 It wasn't long before I gave up on the small flies as I had trouble seeing them and put on my favorite local mountain fly.  I hiked up the meadow maybe a mile from the truck did I finally get my first rise and preceded to miss it.  I let out a few choice curse words.  Not knowing how selective or difficult these fish were I worried I may have missed my chance.  If the morning quick session was any indication of things to come I slightly began to stress about perhaps missing my only opportunity.  I moved up further upstream to a similar looking water and casted where I thought best. 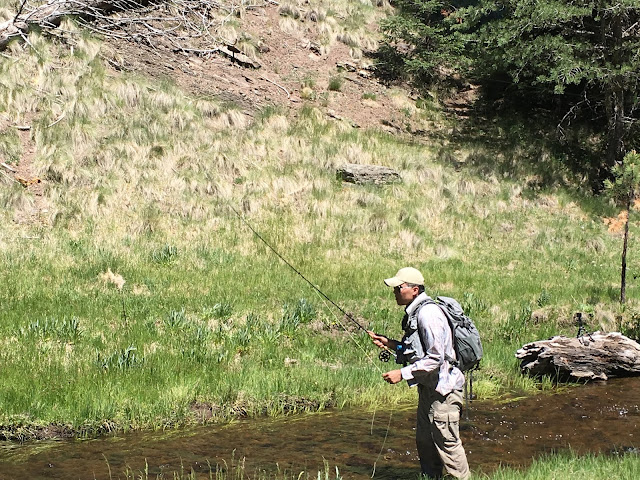 It was not long before my drift induced a splashy take.  This time it was one.  Finally my first Apache trout.  I managed it to hand it was a good 8 or 9 inches.  I forgot my net and I regretted almost instantly as I reached for my camera for a pic.  While doing so the little trout bucked off the hook and I missed my opportunity to document my very first.  I wasn't too heart broken though as I had my gopro running through the whole incident.  As I reached toward action cam to turn it off, I realized that the camera shifted and was no longer pointed in the proper direction but pointing down toward the bill of the cap.  Did I really just lose both chances to capture my first fish?  Filled with both anger and panic now I fished on looking for another willing fish.  A few bends up I got another to take.  This time when I reached for the camera to take a photo I soon realized it wasn't an Apache but rather a brook trout.  It was cruel joke.  The next fish was also a brookie. 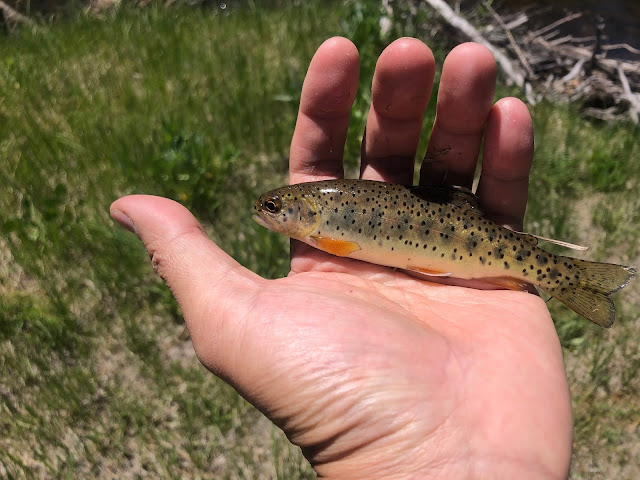 My worry of not documenting an Apache was unfounded though as throughout the day there were more than enough willing fish to take my size 12 fly.  Fishing for these Apaches, at least in this area, is no more difficult than fishing any one of our local creeks.  They are plentiful and behaved liked any small creek trout would, opportunistic and aggressive. 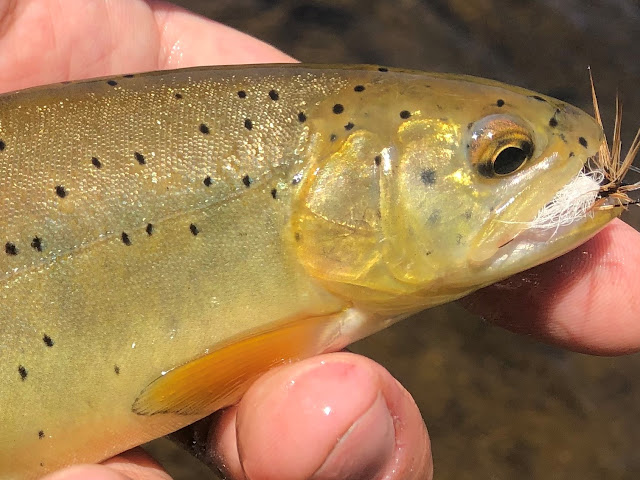 For the next few hours we fished catching more than we can remember.  We reached the end of the meadow and into the tree line.  Casting room now came at a premium and navigating through the brush more difficult.  We decided to end it here and head back fishing along the way back.  I had noticed a particular smell in the air throughout the day.  It had a faint smell of skunk but not in a bad way.  It was pleasant and slightly sweet.  I had no clue what it was and I asked if Kelly had smelt it throughout the day as well.  He had but he too had no clue what it was.  I tried to find a brush or plant that it could have come from but could not locate it whatsoever.  We got to the truck chatted with a Phoenix couple that had just finished their hike before we made our way to New Mexico for our next campground. 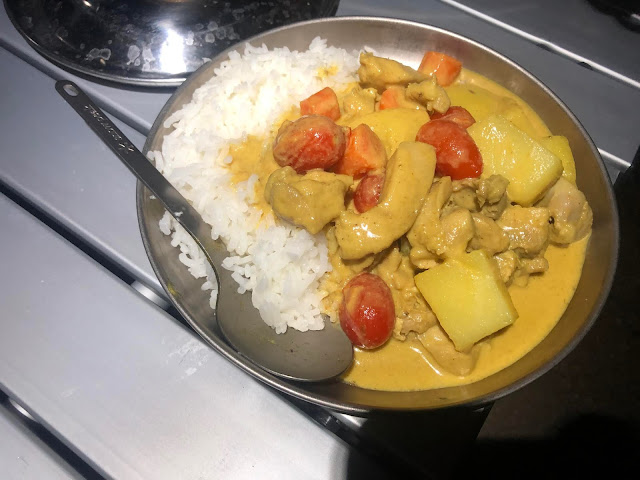 Posted by gourmetsportsman at 10:50 PM