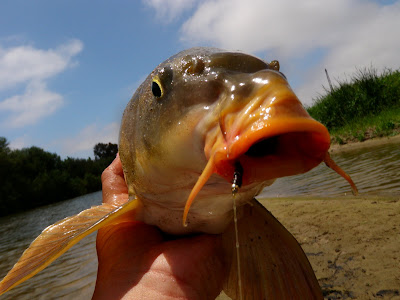 Met Ed on the water at 8am. He was packing his Sage SP 5 wt. I was packing the Sage XP 6 wt after I realized that my Abel was loaded with a 6 wt line not a 5. No wonder my casts with the 5 wt XP were so awful. I hadn't casted that rod in so long that I thought I was just not used to it. The day started good, I spotted several carp for Ed to cast to but none wanted to take. Sighting them was tough as again this morning started out gloomy. After about 45 minutes of trying to get Ed onto carp, I decided to wet my line. The fish today were tough, they refused perfect presentations. I gave Ed a Prince Harry Aggravator and he had no luck. I tried BH Filo fly, Rubber Legged Hare's Ear, BH Peacock Peasant Tail. All refused even with perfect presentations. By 9:15 Ed had to leave for work and I continued to fish, refusing to be beaten. The sun began to peak out but the wind started to pick up as well making things even more frustrating. 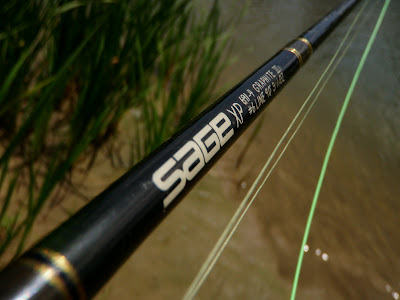 Cast after cast, fish continued to refuse. I went back to the old standby, the Prince Aggravator and began fishing with that. I knew if the fish didn't want to take that fly they wouldn't take any. It was not until just before noon I finally hooked one near the beach. The five pounder gave a good tug but not as good as the same sized fish yesterday. Since the six weight is borrowed from my friend, Joel who willingly admits to being the most unlucky fly fisherman alive, I was beginning to believe that his curse was past along to the rod unto me. Thankfully not. 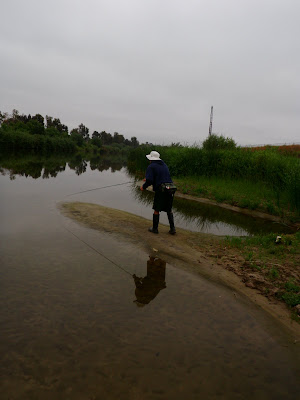 Posted by gourmetsportsman at 2:59 PM