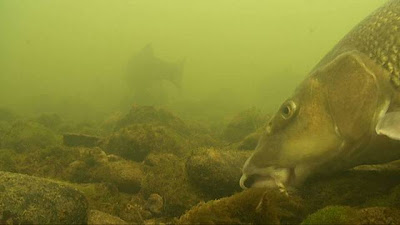 Waking up early this morning, I noticed that the air was absolutely still. No breeze at all. After letting the dog out to do his business, I drove to the river. Water was completely glass-like. Not long after reaching the water I was on one small carp near the bank. Without looking behind me I casted hooking up on some tulies behind me. Oh Brother, I thought to myself. Having lost track of the fish while retrieving my fly, I moved on. Within a few yards I found another fish, even larger than the previous. This carp was in the shallows heading toward a deeper pocket so I casted A few feet in front of it into the deep water. I couldn't see him but I slowly stripped line and felt him tug and tug again. Having messed up on all my previous takes (I had set my hook with trout sets, I strip set this one. In doing so I strip set the fly out of its mouth. Crap!!! I just can't get a break.

Moved on, and again within a few yards I noticed more fish. These were tailing. I was in a forest of cattails so there was no way to cast. So I repositioned myself by entering the water slowly and carefully. After several casts there were no takers. I felt that the my trailing fly (a Filo Fly) had not enticed any fish so I decided to try something new. Going through my fly box I decided to tie a yellow glo-bug. While trying to get the fly on the line two carp feed so close to me that I could literally touch them with my rod. Those fish stuck around so when I finally had the fly on I casted to one of them. In time I had him take but I was not quite sure as he was moving directly toward me. I saw him shake few times and I strip set the hook again to make sure he was on, sure enough he was. I got the line tight, he jumped and shook his head like a bass and the line flew limp. I checked the leader and it had broke again at fly. Unbelievable. This is getting absurd.

I saw a few more fish later but I'd screw those up eventually with bad casts. Man, I am Santiago from Old Man and the Sea. Hopefully all this pain will pay dividends this weekend at a Barrett Lake. This bad luck better not follow me there.
Posted by gourmetsportsman at 11:06 AM