Day Two- Not Quite What We Were Expecting 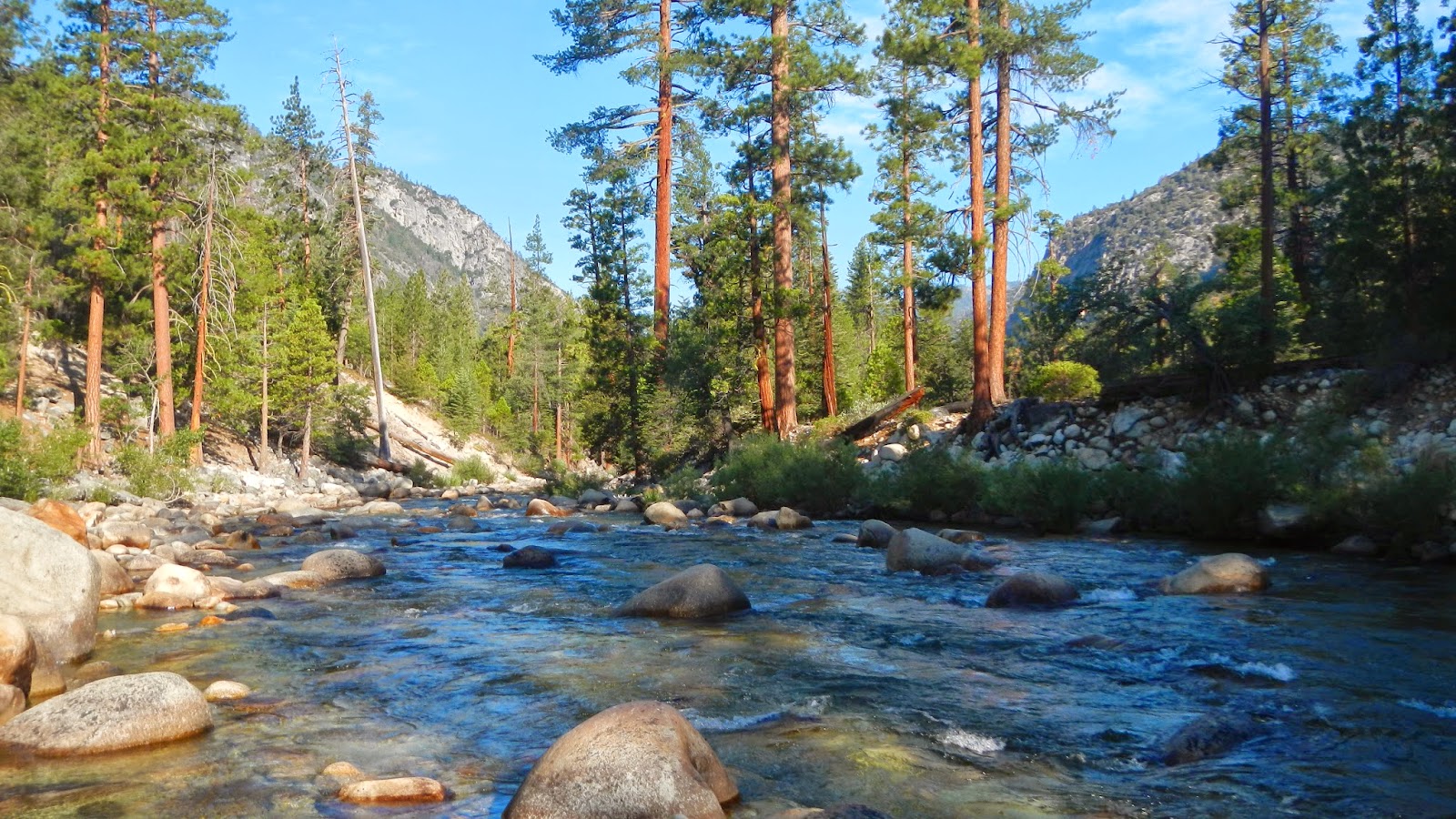 After waking and having breakfast we headed down to the river along our campsite.  We started with dries and it was not long before fish started to take my Never Sink Trude.  Chul had noticed that the water had dropped at least two feet from the last time he fished here three weeks ago. 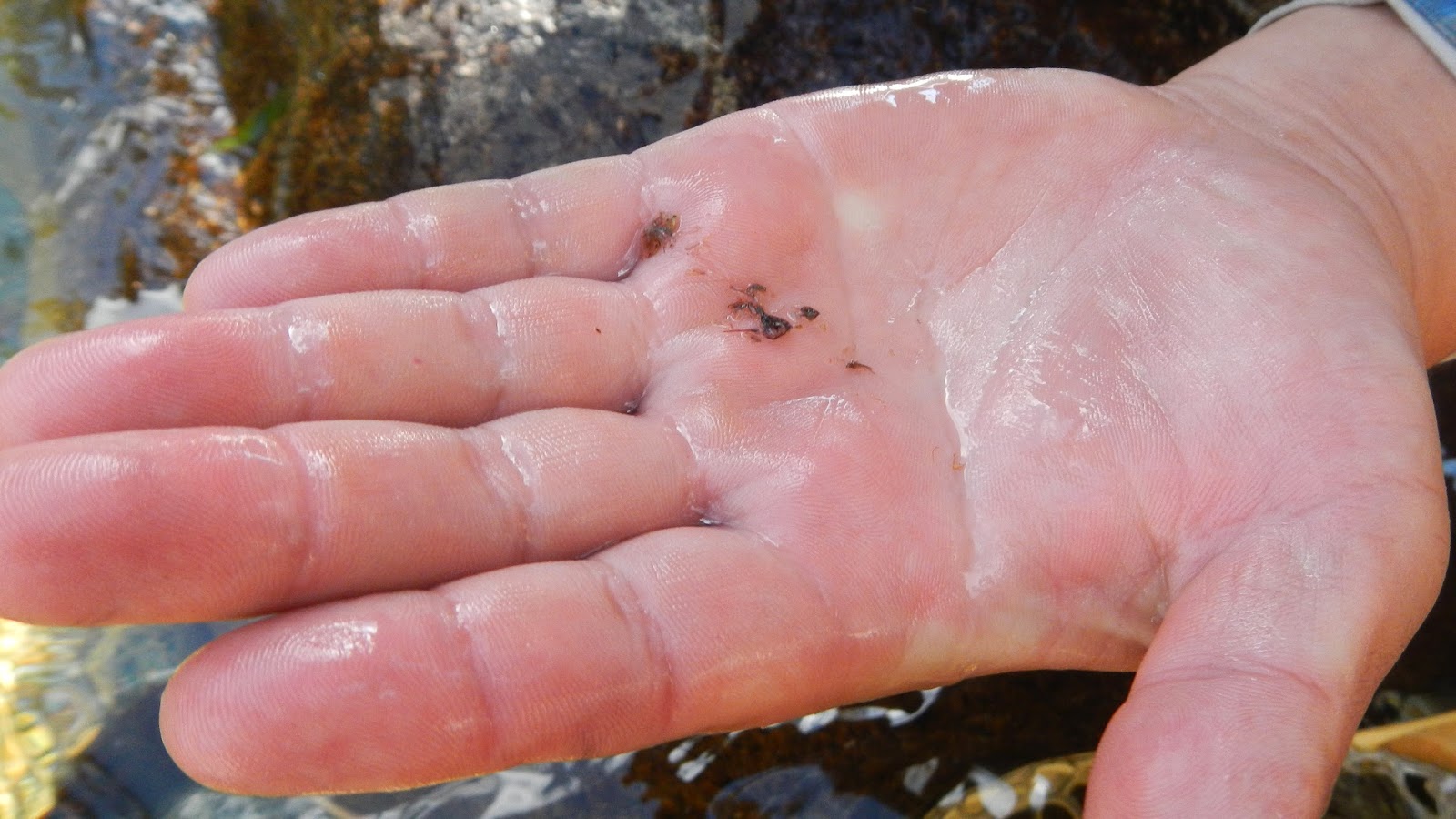 Chul brought a stomach pump to see what the fish were eating and he found out that the fish were consuming just about everything.  Most flies were tan to olive colored from sizes 18 to 14 for the mayflies and larger stones were size 10 to 8.  After a couple hours of dry fly fishing catching fish similar to teh previous day's, we decided to move further downstream to nymph the bigger fish.

Water downstream is faster, larger and more treacherous so I took each step carefully.  We started at a big hole we were confident that held fish.  None were willing to take my golden stone nor my two buck chuck fly dropper.  Chul fishing at the end of the run managed one before moving further downstream.  As I moved to him I saw a covey of mountain quail brood.  It's nice to see the quail breeding despite the drought conditions. 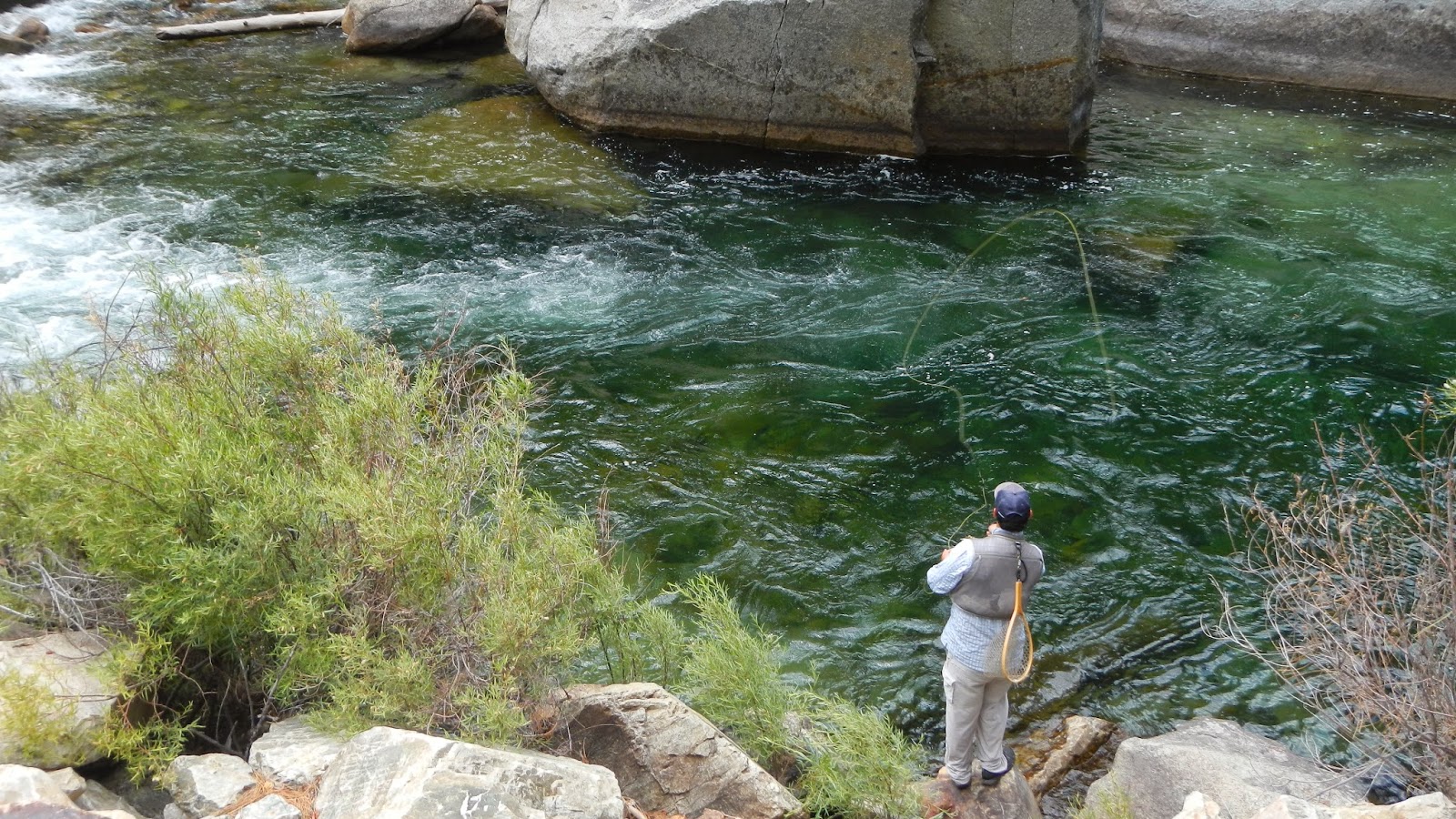 It took me a couple hours before I could get a fish to take one of my nymphs after I switched to a filo fly.  The fish took the filo fly in both original tie and Kern emerger style, a Kern emerger hare's ear, and a Stalcup biot mayfly nymph. 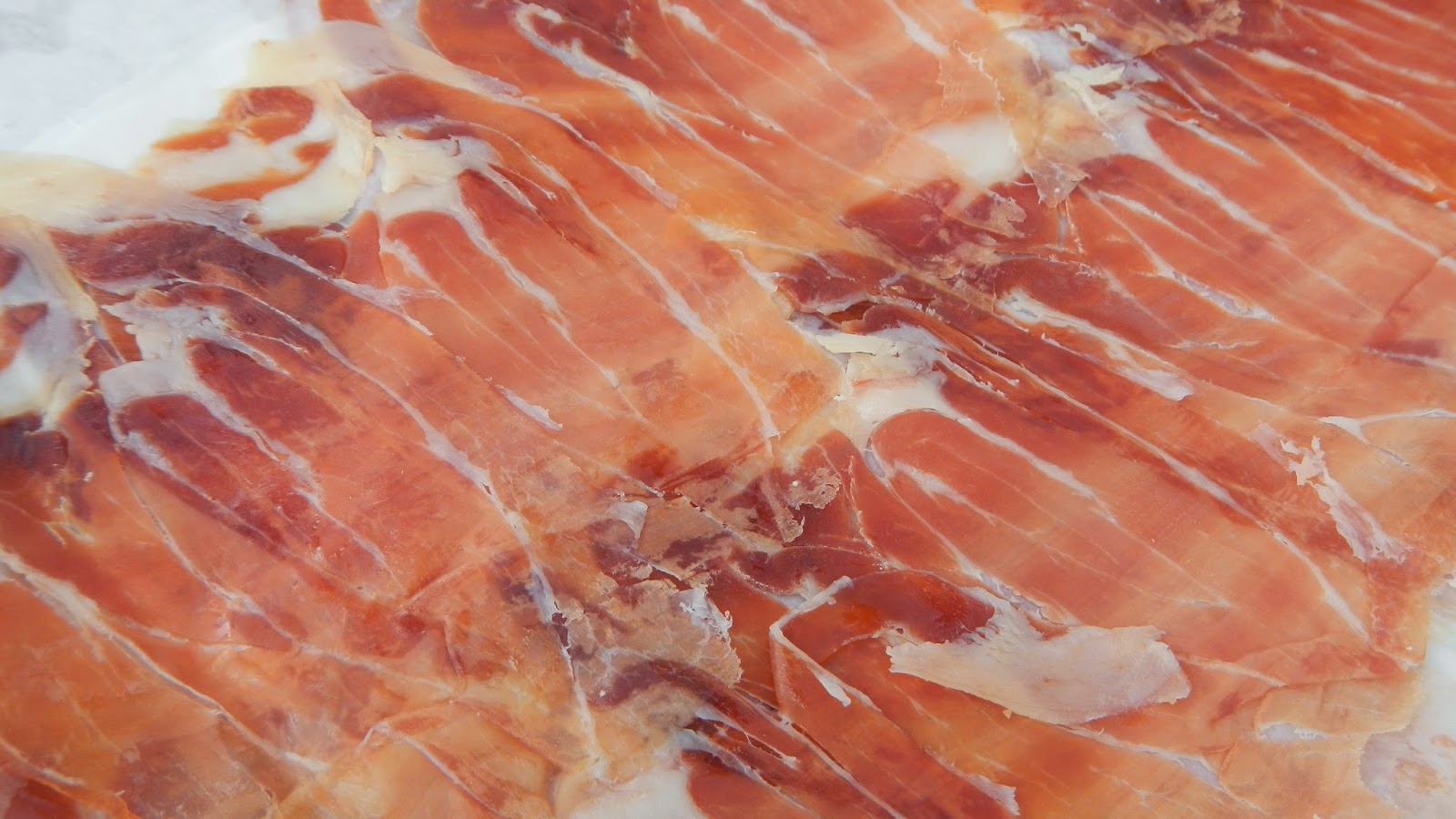 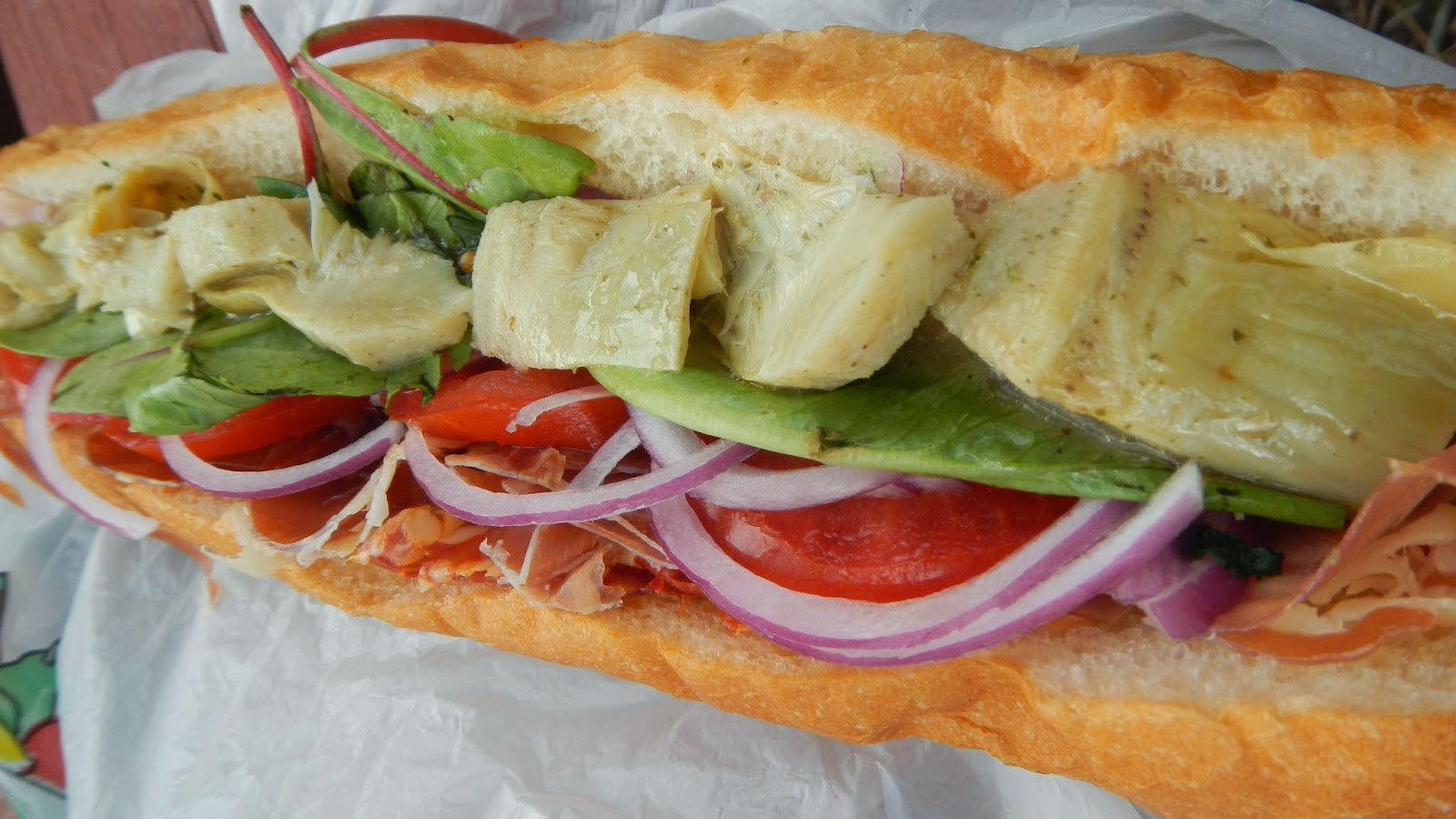 At about 1pm we headed back to camp for lunch and a little siesta.  The morning session was disappointing as none of the fish with any size showed.  Typical holding areas that I like to fish held none or at least none were willing to take my fly.  Chul suggested I fish more of the faster water as that was where he was taking his fish on a bird's nest. 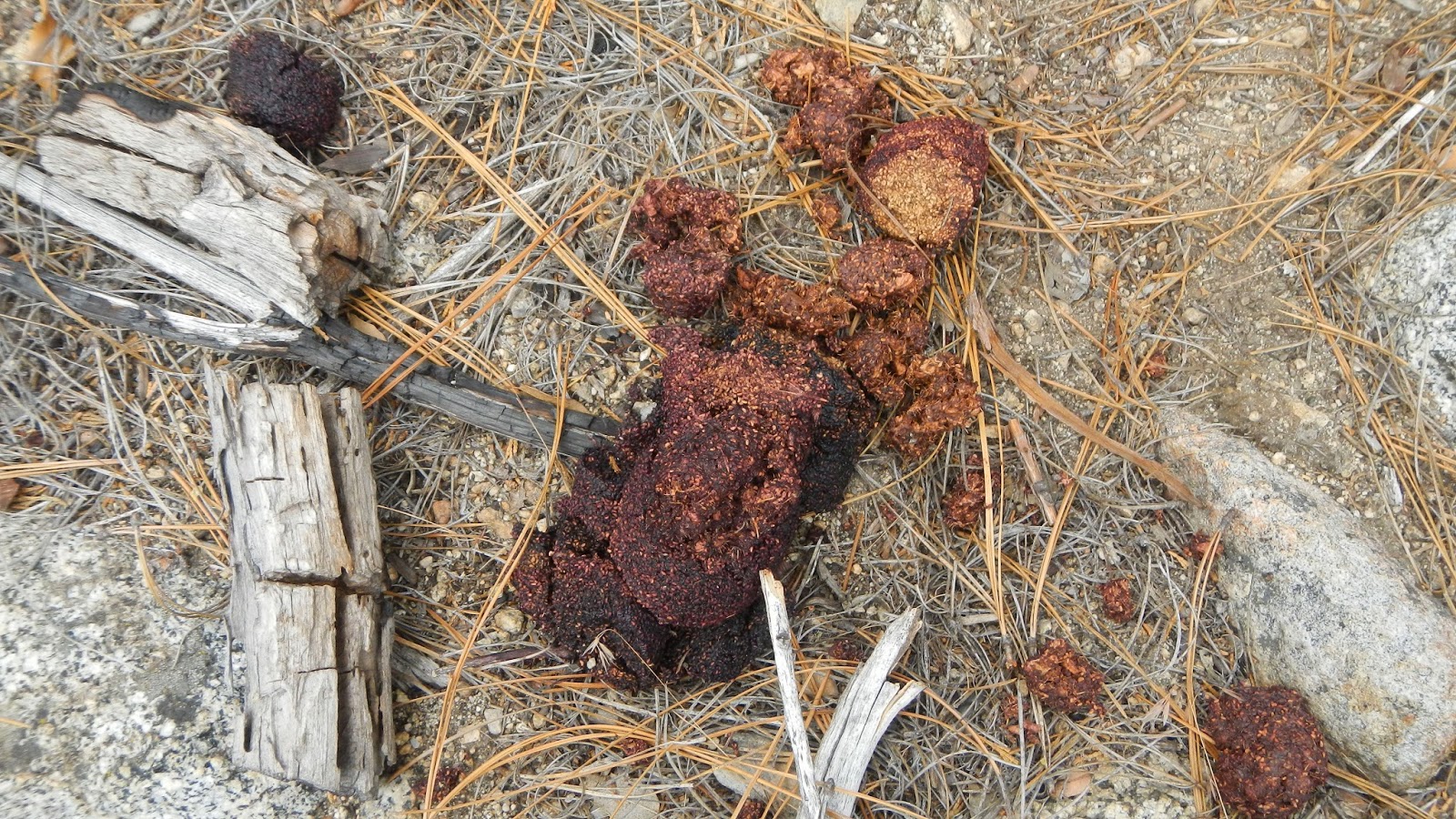 With no big fish making an appearance down river, we moved upstream to a tributary for some dry fly fishing.  Once we made it to the water though the BOA wire on my Simm's boots came apart.  So we made it back to the truck and I borrowed Chul's boot.  He was fishing with river shoes and had brought his Simm's as a back up.  I'm not having too much luck with boots lately.  We choose then to leave the tributary and returned to the main river.  To get there though we crossed a fern field that showed evidence of a big bear.  We first found a large pile of scat.  Later we found his bedding as a large area of ferns were matted down. 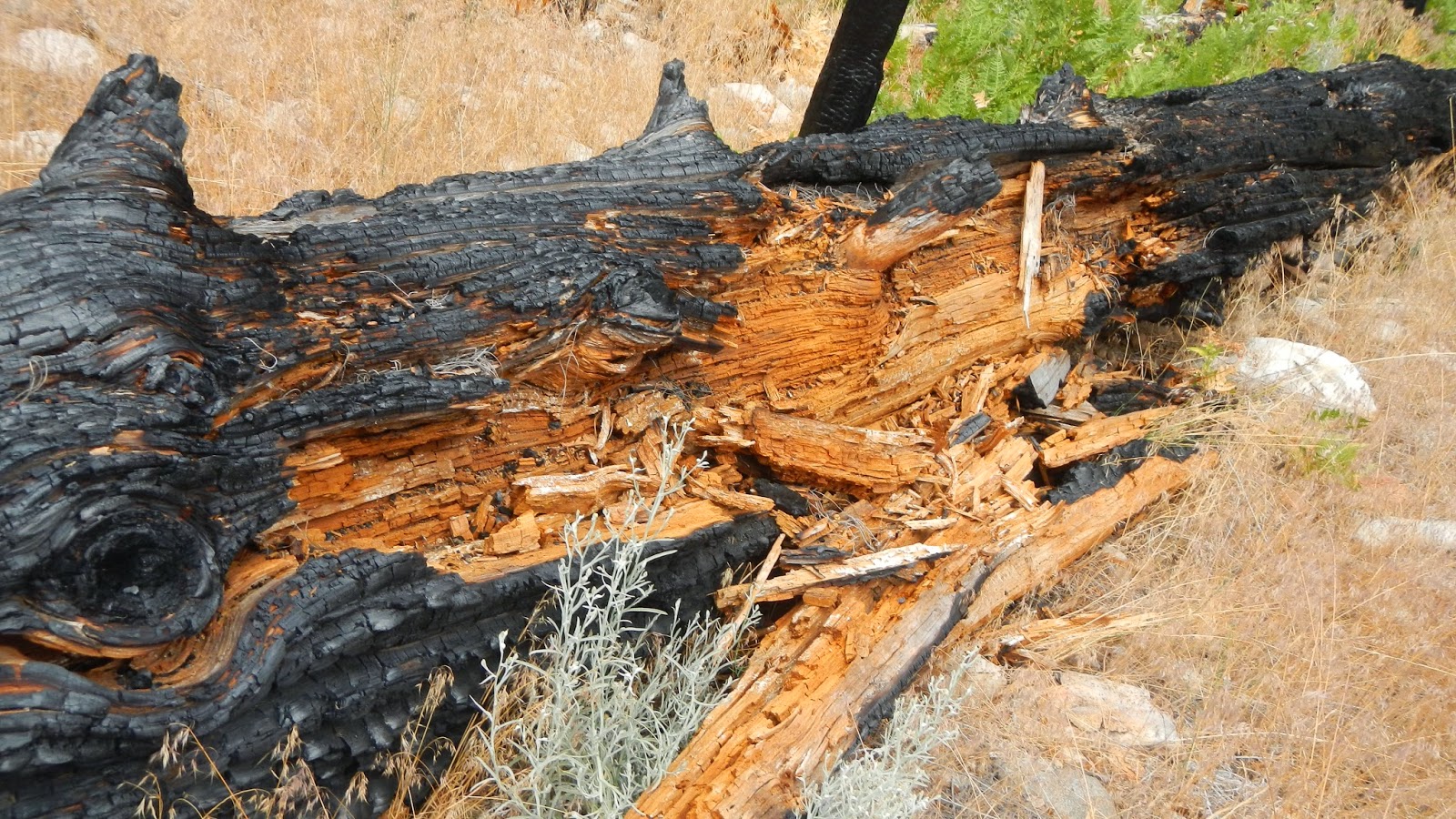 As we moved into the fern field we saw more evidence of this big bear.  Rotting logs were torn apart and there were several raspberry bushes.  Since the ferns were  about waist high we wisely decided to no longer take this route as we did not want to surprise a napping bear.  We got out of this field and took the long way around in a more open area. 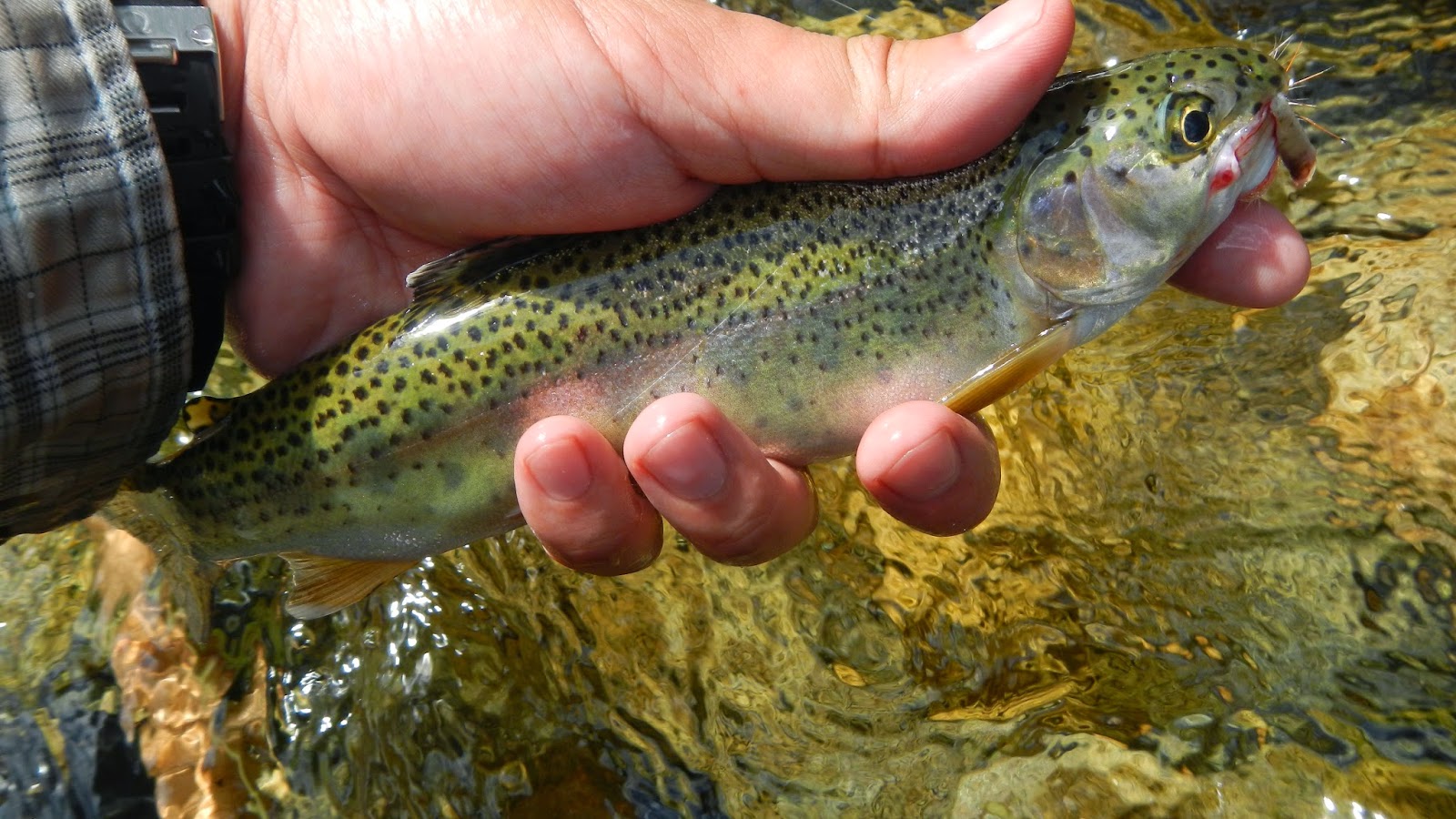 This particular area was a shallow area perfect for dry fly fishing.  The Never Sink continued to produce fish. 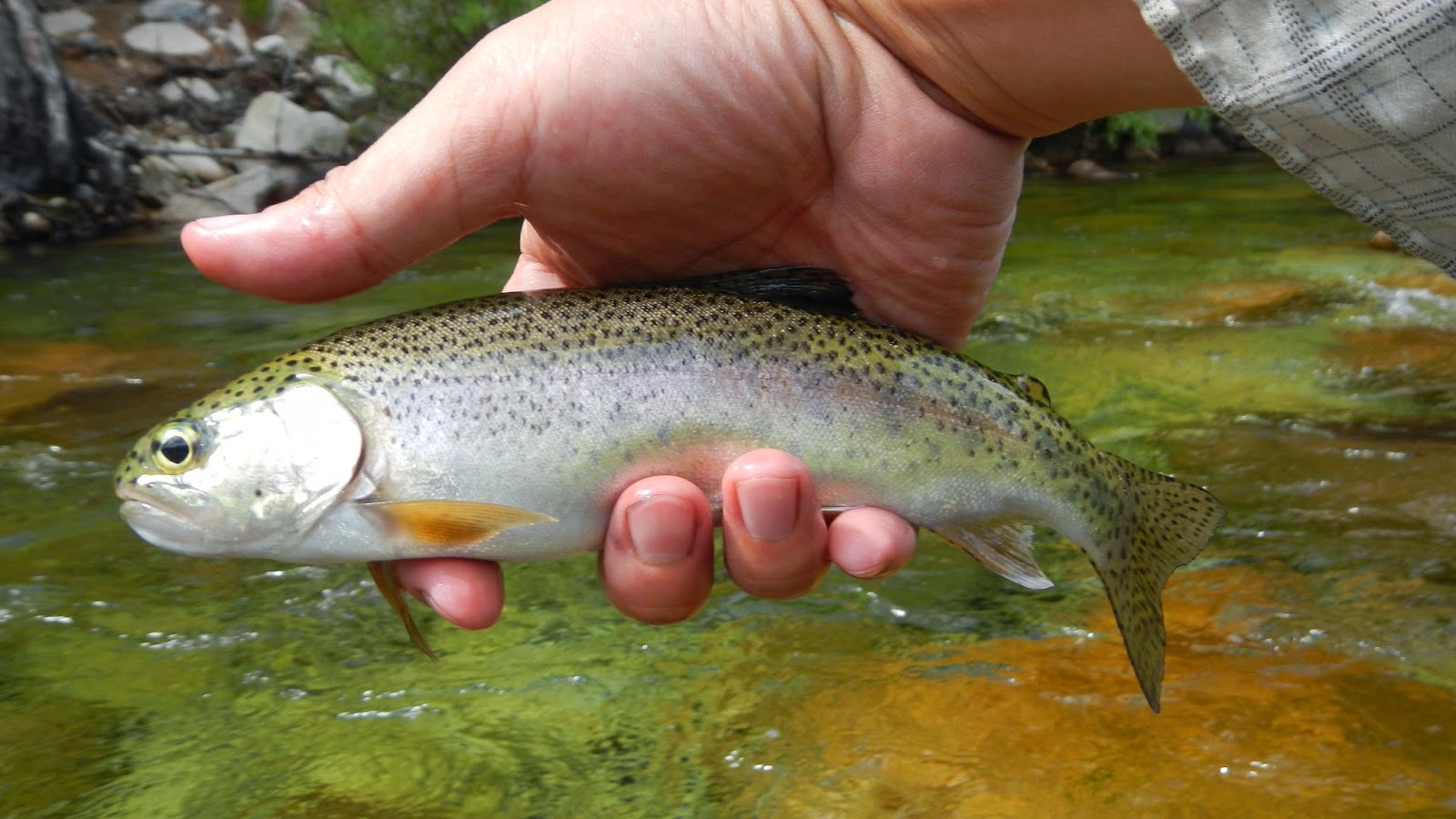 Trout still were unimpressive, at least for this river, and most were at best in the nine inch range.  They were nicely colored though but I couldn't still feel disappointed despite the numbers were were catching. 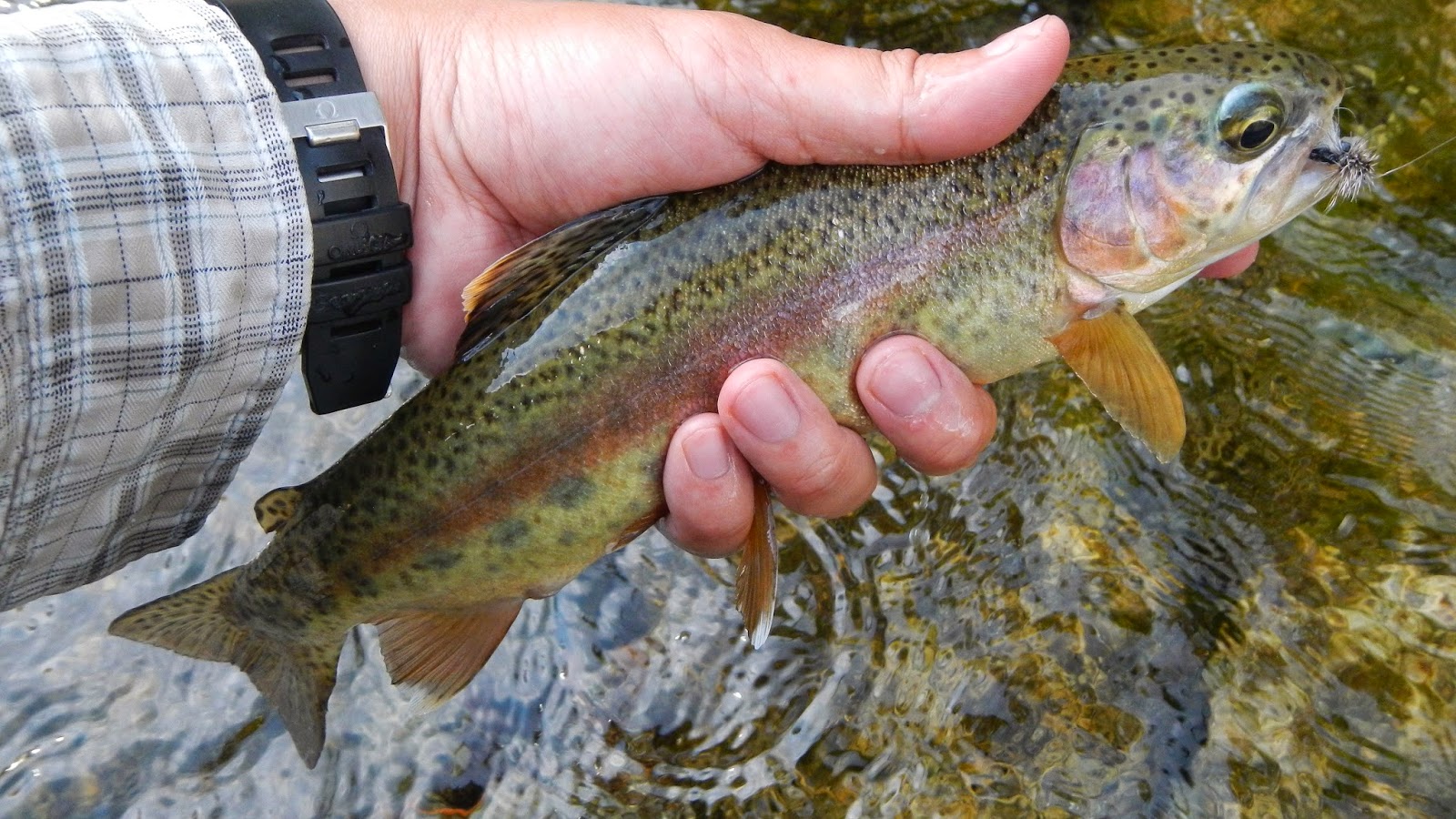 Chul moved to his favorite area that had a long section of a deeper faster run.  I left him there moving downstream as he re-rigged to Czech nymph.  I moved down until I ran into another fishermen so I moved back to Chul.  As I approached him I saw he hooked up on a rather nice fish only to see it break off.  When I finally reached him he said it was a 15 incher and how the hell did it break his 5X tippet.  Later we were trying to analyze how the fluorocarbon failed.  The only thing we could come up with was that since he keeps his vest in his garage the heat must have compromised the line.  I moved upstream and fished a hole right in front of a fallen log.  After a few dinks I managed my best fish of the trip.  According to Chul this fish would have been considered disappointing on any of his previous trips.  Not sure what has happened to this river. 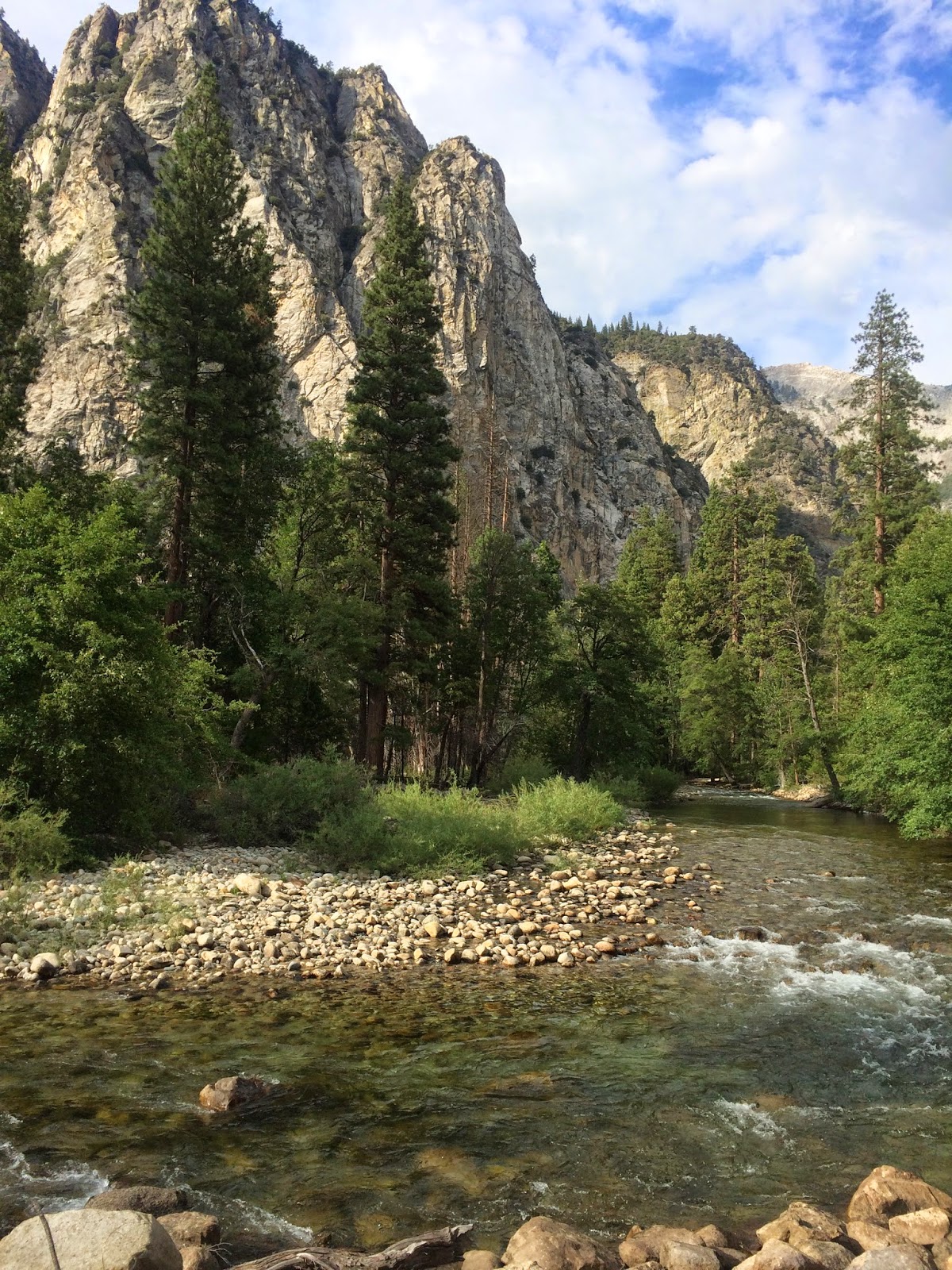 Making our way back to the truck we checked out a nearby waterfall and fished some of the pools.  I managed a few dinks and Chul manged a nice 12 incher that had swallowed a hook deep and had about 20 pound mono sticking out of it. 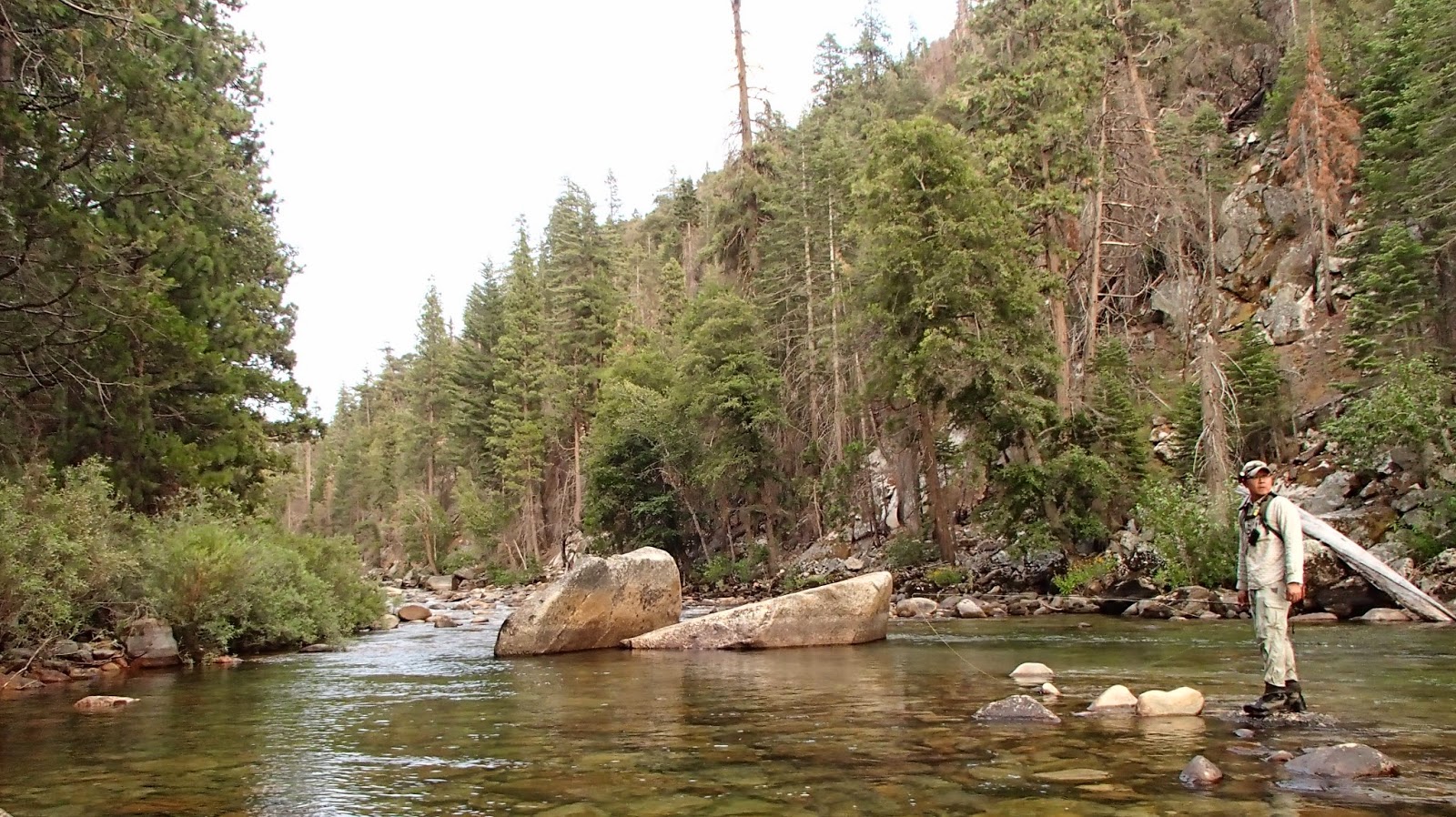 By this time we began to get ready for the evening hatch.  We checked another area down river that has produced in the past.  Again the hatch did not occur until just before the sun went down.  At this section the fish were rising more consistently.  I managed several on a parachute PMD. 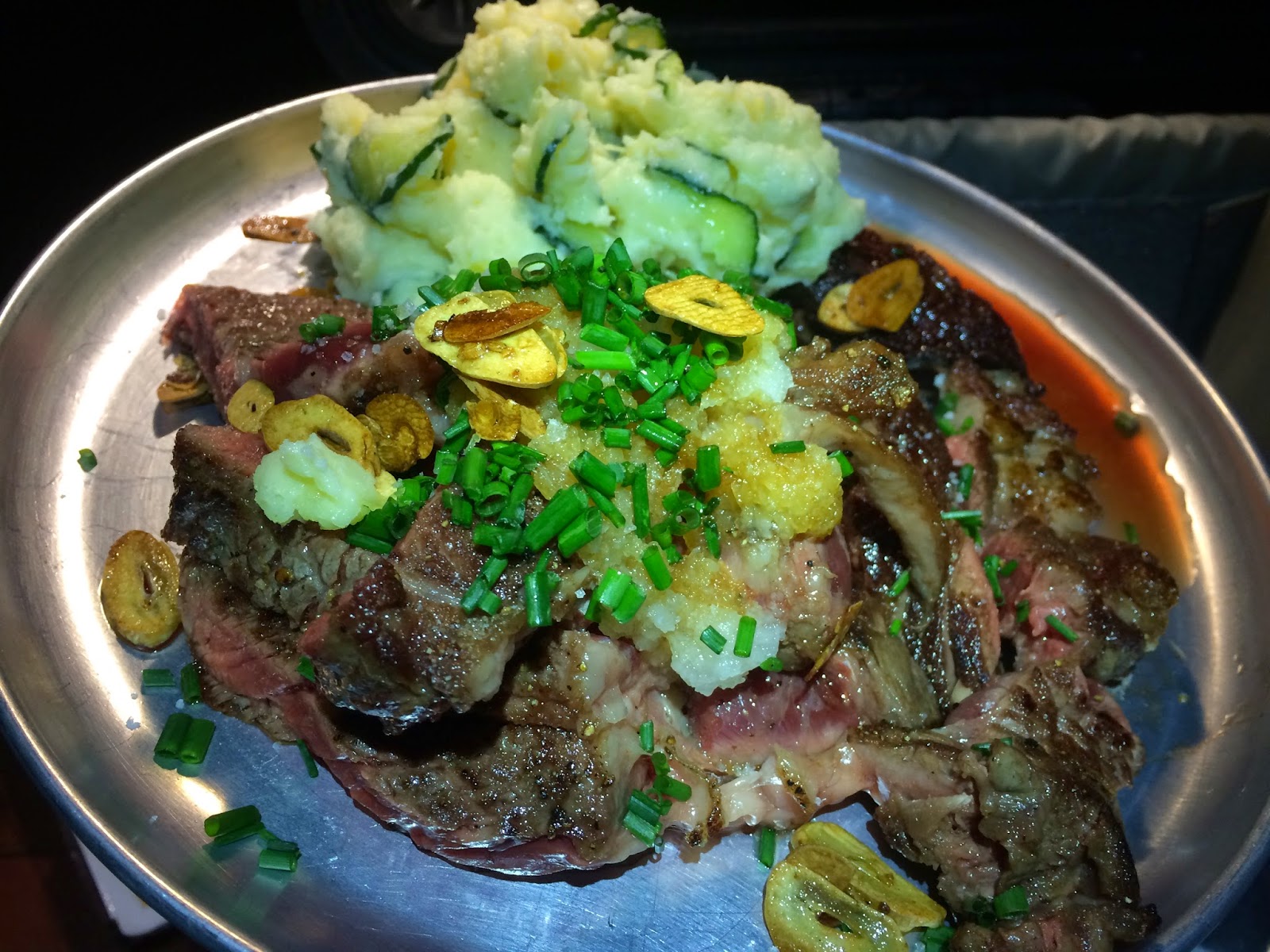 It was getting to dark to safely fish and we headed back to camp.  I prepared steaks for us in a Japanese style with grated daikon, chives, fried garlic, and soy, served with Japanese potato salad.  Drizzle had us concerned that we might get pissed on during the night.
Posted by gourmetsportsman at 3:30 PM