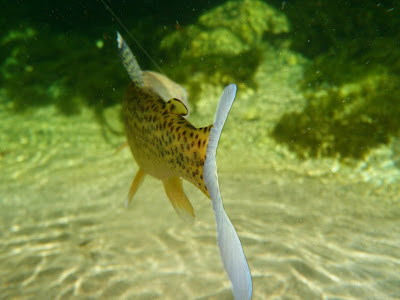 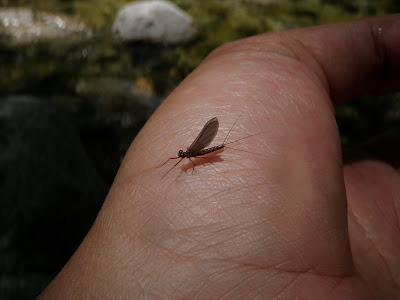 Early this month I fished the San Gabriel rivers both the the East and West Forks to try out my new rod I bought in Japan. It is a NAC Microfy49 #2/3 6 piece rod. According to the salesman at Sansui, it is made in Japan. It cost ¥22,000 or $230US or thereabouts. Once I saw it on the rack I knew I had to have it. This rod is very unique and quite a niche product. Slow actioned and tiny, I doubt it would ever catch on here in the states. Although I think it would do well here in SoCal or in the small streams of the northeast. Backpackers would also like this rod. 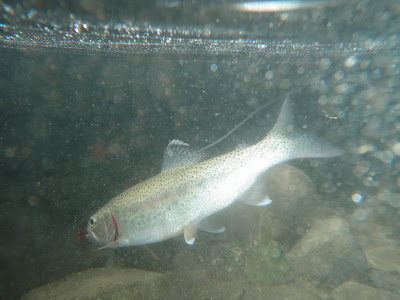 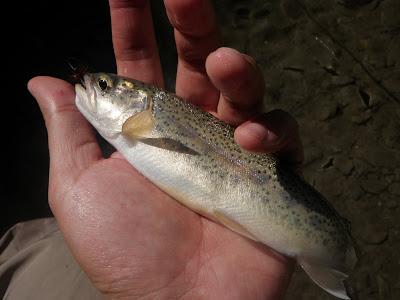 Well back to the fishing, I fished the East Fork the Saturday of the memorial day weekend. Talk about a circus. Luckily we missed the "diaper hatch" near the campgrounds. Although I wanted to hike deep before we started fishing, my fishing partner was getting a bit impatient and we fished alittle closer than I really wanted to. I can't blame him though the water always looks so good. But I know the better fish are further up stream. It didn't really matter this day, as Ed had to be home for a BBQ anyways, so going in too deep wasn't much of an option anyways. 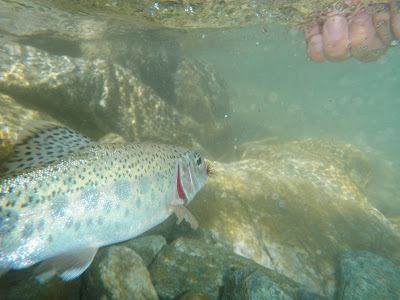 The river was high and fast. I've fished these waters hundreds of times and never had I seen it with so much water. Wading was not difficult but challenging at some places, especially since I'm used to just raging through this place without a second thought. 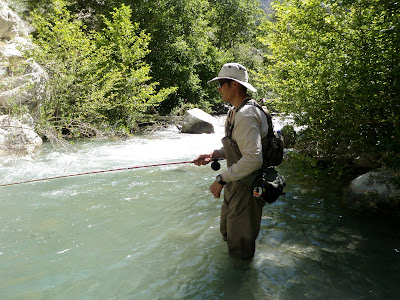 The fishing was great. Ed was trying Czech nymphing and I was dry fly fishing. Why anyone would ever doing anything but dry fly fishing here is a mystery to me. So very few waters allow you to dry fly fish and consistently catch fish. Usually you need to wait for a hatch. or me I get plenty of subsurface fishing in the seirras and so whenever I get a chance to dry fly I will. Ed caught several. I'm not sure how many but I got at least 100 strikes on the dry fly. That is a very conservative estimate. At some holes I was getting bit on every cast on my first 20 casts. Amazing. All on the surface. We left so Ed could meet his timeline. 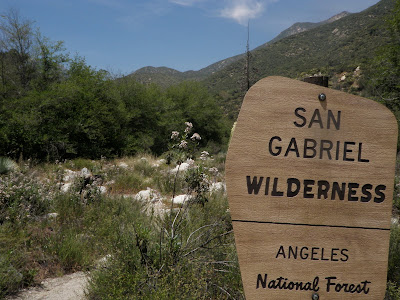 Amped, I decided to return the following Thursday (June 3rd). But once I came to the road that leads to the EF, I decided I wanted to try the West Fork and Bear Creek instead. I hiked up to Bear Creek and decided to fish that first. I headed up the creek and hiked in. Still using the same fly from the last outing, the result was much the same as the last. Another 100+ fish day. On some holes a fish rose on every cast. I did not derig from the last outing, I wanted to see how long I could make this setup last. Kind of like a deranged version of the famous one fly contest. Eventually I lost my fly, so I switched and tried others. They were not so effective but still good. I fished to the San Gabriel Wilderness boundary until deciding to head back. The trail was hard to follow and I was tried of bushwacking. 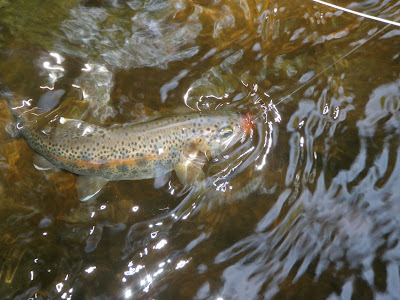 Once out I decide to head up the West Fork. I fished several holes that produced over 20 fish each. Some holes trout were coming up taking flies. After a few hours I had enough and decided to head home.

Some observations from the two outings:


The EF has alot of water on it and moving pretty quick. Some areas were challenging to wade- not hard but challenging. I not used to having the EF move so fast.


Bear creek is a lot easier although the deeper you go in the bushwacking is out of control and obviously the WF is simple because of the controled flows.
There were a ton of bugs on the WF. I was bit all over and even snorted a few through the nose. I never noticed any bugs on the EF.


The fish at Bear creek seem to fight the hardest. The EF had the largest average size.
Posted by gourmetsportsman at 8:27 PM