Welcome to the Jungle 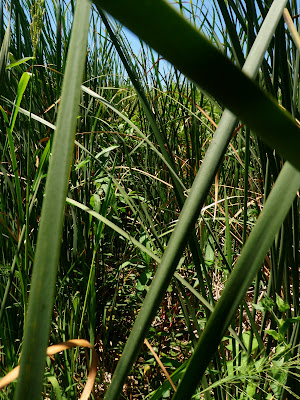 It has been a few weeks since I hit the carp waters. This morning I decided to hit it up before I headed into the office to meet my business partner. There were a few things going against me today. First I left the home way too late. I didn't arrive at the water until after 10:30. Way too late. By the time I was stream side the winds had already began picking up. Sight casting was going to be tough. Next the vegetation growth was out of control. My usual casting lanes are now gone, leaving only a few places left you can even cast a fly rod. Not only that but just navigating through it all was as if I was in some tropical jungle. I really needed a machete. Ultimately I managed to cast to a couple of carp but had no takers.

The day was a bust although I did find some baby bluegills nests. Unfortunately I was able to get any to bite. There was either a large bluegill or a normal sized bass near it that I managed a quick glance before it vanished in the deeper waters. Looks like I won't be fishing these waters for the rest of the summer
Posted by gourmetsportsman at 2:25 PM