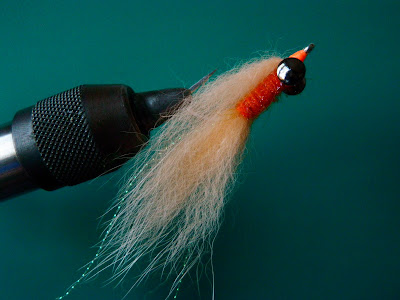 The Hoonie 2 or H2 fly has never been published although the creator had submitted it to Gary Bulla for his website. For whatever reason Gary never added it. This fly was created by my friend Kyung Kim who invented the original Hoonie fly (tying instuctions are on Gary's site), which has always been one of my go-to bay/surf flies. This fly is a bigger variation of that great fly and can be tied to hooks up to size 1. The Hoonie 2 also known as the H2 is a ghost shrimp pattern and can be tied in not only orange but white, pink, chartreuse or any variation thereof. You can add krystal flash to the tail (and even the wing) if you choose but use it sparingly. I personally never liked flies with a lot of flash. I often leave it out when tying this fly and have still slayed them. 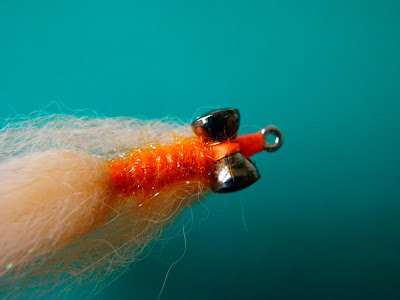 Tie the body up to the eye but not over the eyes. Reinforce the eyes with the wire just like the picture above. Speaking of the body, although I use Ice Dubbing in a dubbing loop for the body, Kyung has told me that the original pattern was never dubbed. I asked him then what did he use. When he originally gave me the fly about 6 or 7 years (or more) ago, when I looked at that fly I thought it was a dubbed body. Unfortunately Kyung has been away from the whole fly fishing scene for a while now and he has since forgotten what the originally material was, although he did say it was some sort of chenille style material. I remember looking at the fly he gave me and it did not look like ice chenille, it simple didn't have those fibers sticking out. Kyung told me if he ever figures it out he'll let me know. Either way, the pattern works and works really well. So well that the majority of the flies in my bay box are Hoonies or Hoonie 2s. 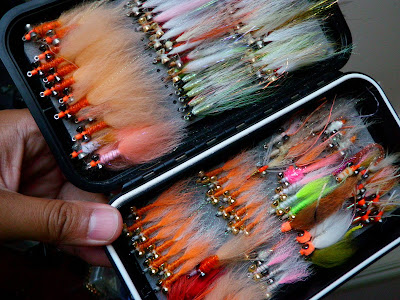 Posted by gourmetsportsman at 11:06 AM