Last Shot Till the Holiday Weekend 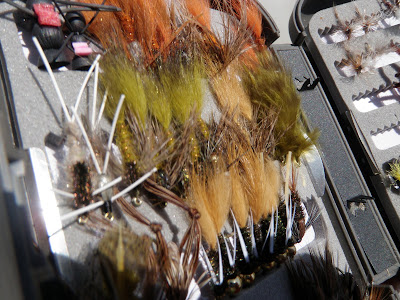 Before the holiday crowds hit the waters, I gave carp one more try. Fish were hard to find. An hour on the water only three carp were seen. Only one gave me a quick opportunity to cast to it which I failed by throwing a tailing loop that wrapped around the tip section. That's what happens when you get too excited and rush. After fixing the mess the fish was no where to be seen. It was cruising rather fast so even if I made a cast it probably be a one shot deal. While searching along the bank, I saw the second fish was huge at least 20 pounds. It was mudding along the bank, it saw me 20 yards before I saw it. It fled before I even had a chance to take the fly out of stripping guide. The last fish I saw while walking elevated high above the water. Cruising in the shallows, the fish was easily seen from above. When I managed to make it down to the water the fish was no where to be seen. After that I gave up and headed home.
Posted by gourmetsportsman at 11:07 AM