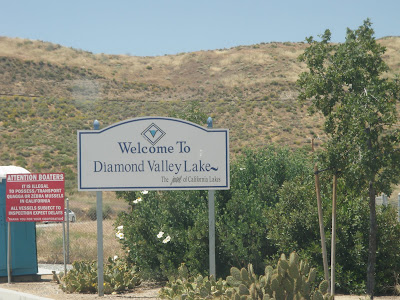 Although today is the opener for Barrett Lake, I decided to skip it and head off to Diamond Valley Lake (DVL) instead. I chose to fish here rather than Barrett for a few reasons. One its closer to me, only an hour and a half drive from my house. And unlike Barrett, DVL does not have set times when can enter the lake. So that means I could get a few more hours sleep. Another reasons is that on Wednesdays the price is half off. I paid $37 plus a $5 reservation fee for a half day boat. Entrance to the lake is also half off for $3.

I arrived just before the 6am opening and anglers were already waiting. 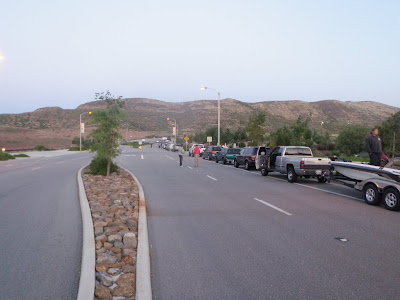 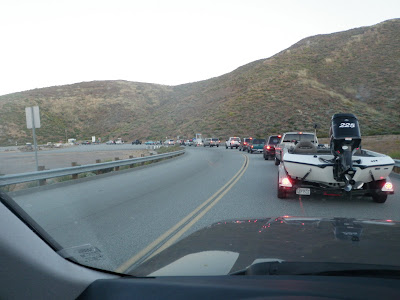 Once I received my boat I headed left of the marina and started fishing with my Sage XP 8wt loaded with a Rio Striper 350 gr line. I tied a rather large articulated bluegill pattern I created. Unfortunately I will never know how effective the pattern is as I lost it after a few casts in the submerged trees. I spent sometime here with no luck. I moved across the lake and fished more submerged timber. 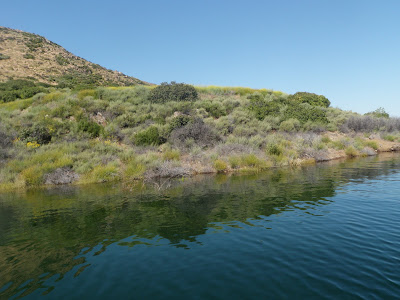 It was difficult at times to determine whether or not the fly was taken. Bumping the structure at times felt like strikes. On one occasion I thought I was hitting structure but in fact it was a fish. The line would go tight and then limp like I was hitting structure. I finally started to pull a bit after a while. The fish must have been swimming towards me . I finally saw the fish initially I thought it was a bluegill. A rather big Largemouth was following it as I brought it closer to me. It appeared to be at least 4lbs although fish always look smaller in the water. When I finally landed my fish I realized it was not a bluegill but to my surprise it was a smallmouth. Little did I know this would be the only fish for the day. 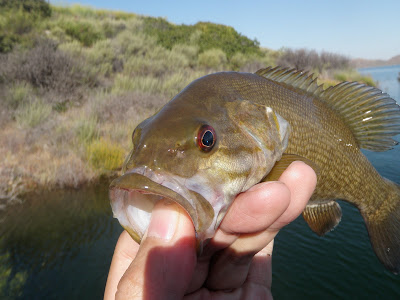 This fish was taken on my Scott S3S 7wt with 250 gr and a silverside minnow fly. I floated throughout this area and spotted several bass over 4lbs. Unfortunately none were willing to take my flies. In one shallow area I floated over a pod of carp, maybe ten or more. All were at least over 5lbs. None were willing to honor me with a take. My boat was due at noon and 30 minutes before that time I managed 2 big strikes but was unable to stick the fish. They both came unglued while trying to set the hook.

One fish for the day and a rather small one. That's rough. But at least I didn't get skunked. And at least I got a SMB as I haven't landed to many of those in my fishing career. I wonder how they did at Barrett.
Posted by gourmetsportsman at 2:22 PM