Another Attempt at Carp

Although I thought it would be a pointless endeavour as the last few days have brought light morning rains and high afternoon winds, I decided to make another attempt at these local carp. Because the last few days I've been tying flies for carp and my upcoming trip to Barrett Lake, its given me a strong desire to get my line wet. The weather has not been cooperating though, in spite of this I decided to I'd give it a try. Once I made it to the water I noticed that the water clarity is next to nil. When I reached an opening in the river, I saw a tailing carp in some cattails in about ankle high water. I thought maybe it won't be so bad after all. I couldn't cast in front of its face as it was digging around the tulies so I casted just at the front edge of the cattails and waited for him to reach that area. Soon enough he came. I began my slow short strips but to no avail. This would be my only shot at fish to today as sight casting was nearly impossible. I hiked up and down the river to check new spots but no fish were in the shallows. 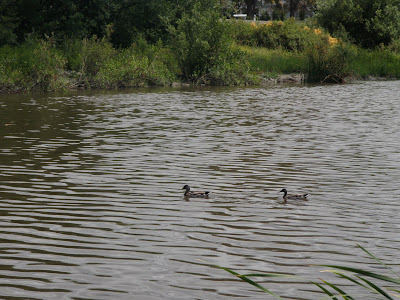 A lot of waterfowl were on the water including these two drakes. I'll see you two in the fall. Afterwards I headed to a nearby community lake to try my luck at some bass. This too I thought was somewhat pointless as I've not caught a bass in that lake in quite sometime. I spent about 40 minutes there and finally decided to go home skunked for the day.
Posted by gourmetsportsman at 6:44 PM