Yesterday I received my Lagiole knife. This Laguiole is from L'Artisan (Honoré Durand). This is a 11cm Preistige model with Snake wood handles. This is a true Laguiole knife made in France in the village of Laguiole. Although there are many manufactures in this small village, only two manufactures of handmade laguiole knives are available for export. They are La Coutellerie de Laguiole aka "Laguiole de L’Artisan" and "Les Forge de Laguiole". Unlike Champagne, Laguiole was never trademarked and therefore anyone can produce a Laguiole style knife and still be called Laguiole. As a result there are many Laguiole knives that are produced in other parts of France and elsewhere such as China and Pakistan. 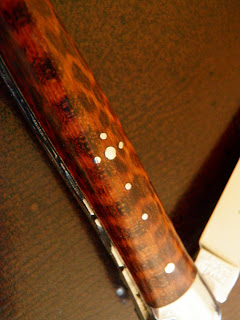 These knives originated as Shepherd's knives. In those days Shepherds worked on Sundays and were unavailable to go to church. Therefore each Laguiole knife contains a cross made of six pins. While out tending their flock a shepherd could open his knife and stab it into the ground or a loaf of bread and pray to the cross. *EDIT 5/2020: Sadly this myth has been debunked.* 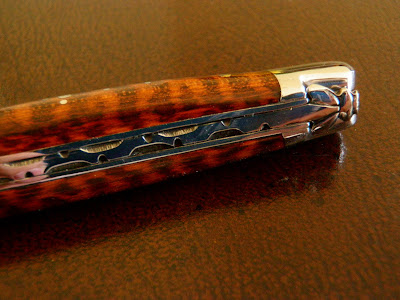 All quality knives have hand chiseled springs with a forged Bee at the end. Inferiors ones are machine stamped. 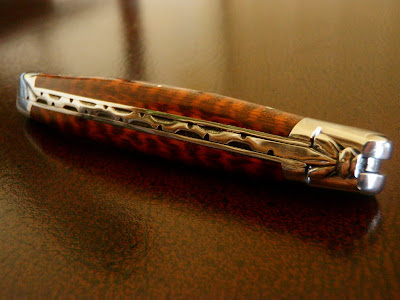 Some say the insect at the end is a Bee others say its a fly. Local legend says it's a bee, Napoleon's imperial seal offered to the town as a token of gratitude for the courage of the locals during battles. Others disagree and state its a fly, an insect quite known to cattlemen and shepherds. Either way the controversy adds to the appeal. *EDIT 5/2020: Sadly this myth has also been debunked.* 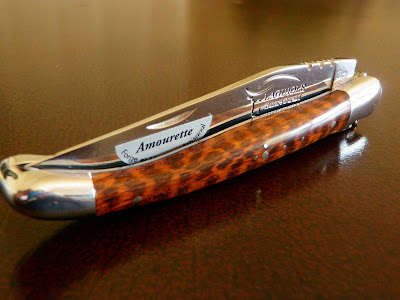 The shape of the handle is said to represent the leg of a woman. 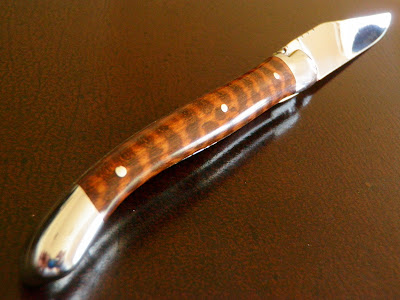 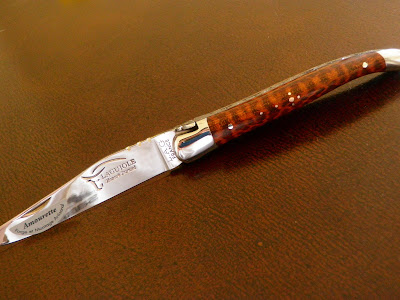 Each knife is handmade by one knife maker from start to finish. Like a fine shotgun the fit is always excellent. The blade will always click open and shut and never shift. 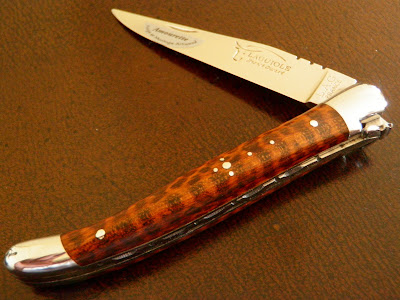 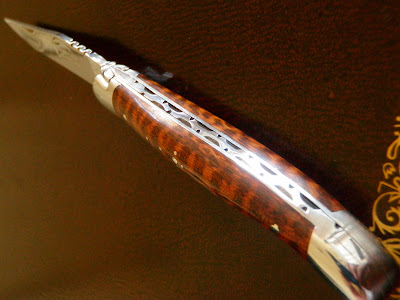 Notice the spine of the blade toward the handle, its a unique signature of each individual knife maker. Durand's is 7 dimples which represents the 7 days of the week. 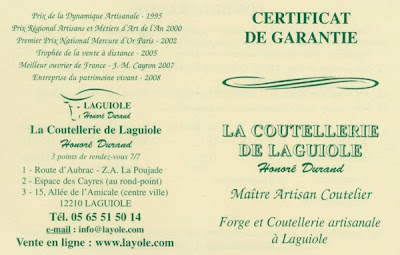 All Honore's knives come with a gaurantee card and certificate of authenticity.

This knife will complement my Darne quite nicely in the field.
Posted by gourmetsportsman at 12:21 PM