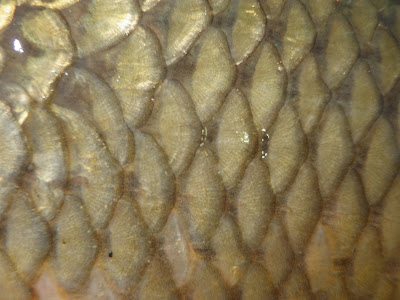 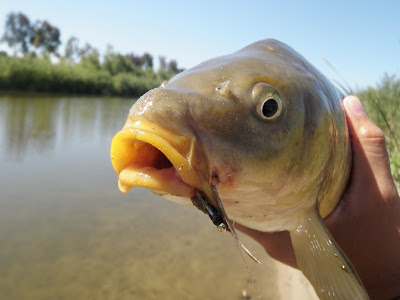 "All good things come to those who wait." If you had told me that days ago or even earlier this morning, I would have probably punched you in the crotch or at least told you to F-Off. But I guess that old saying has alot of truth to it.

I awoke around 7am today and let the dog out to piss. Originally I did not feel much in the mood to go out and attempt another try at carp. I've been just too frustrated lately. After all I'll be fishing one of the best bass fisheries in all of California tomorrow. But since there was absolutely no wind today I thought what the hell.

Once I hit the water, I saw two carp feeding together only a few yards from me. I threw out a cast and promptly plopped the fly right in front of them with a big splash. Spooked, the fish bolted. Great I thought way to F-up that great chance. Much of the day went as such. Several of the first few fish I saw I was getting way too impatient or too cute with my casts. I'd either splash the fly too hard, hit them in the head with the fly or line, or just throw a tailing loop. If it weren't any of these I'd hook my backcast in the cattails every 10 casts. In my mind I was cussing up and down the river. I kept my line in the water and walk up the river. When I retrieved my line, I noticed a bass fry on the trailing San Juan worm . Well I thought at least I'm not skunked for the day. 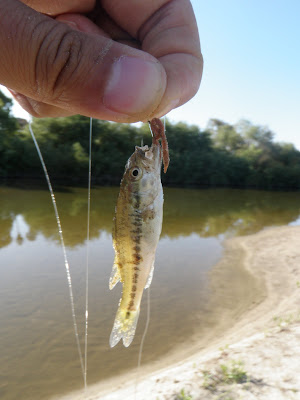 It seemed that every carp I saw and I saw many, that I'd screw up somehow. Then I saw a lone fish while I was in forest of cattails. I had to cast high, so not to hook up behind me and shoot the line out. Landing in front of the carp, the fly was presented perfectly. It took, I strip set it and ripped the fly of of its mouth. Perfect, just my luck. At this point I was alittle pissed off, alittle meaning alot. I moved up the river and much of the same. eventually I noticed that I had a wind knot. So I changed my leader. All I had was a 9ft 0x, I had for years. Tying it on , I decided to forgo the trailing fly as I'd been casting like an asshole all day. Better keep it simple. 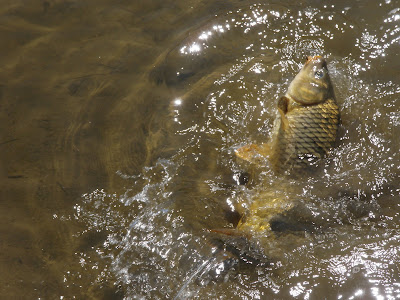 I saw several more fish and I'd make a perfect cast but none would ever take. So for every cast, I'd wonder if the leader was too heavy and being seen by the fish. Since I had no other leaders but 5x, I'd just have to make do. I eventually found a loose group of three and casted at least 30 time before one decided to take. Seeing the fish flare its gills but not feeling any resistance, I wondered if I should set the hook harder. The dilemma was if the carp had not taken the fly I'd spook him off, I set it anyway and sure enough it took. It bulldogged me for a while and I thought perhaps I'd hooked a bass. I reeled the slack line and then it decided to make some runs. In time I landed him and finally accomplished catching my first carp. Unlike Hemingway's Santiago, it did not take my 84 days to get my fish. Thank god. As most people don't care for carp, I decided to keep the carp, I normally do not. Its been at least 15 years since I'd kept a fish. I will use it for practicing Gyotaku. 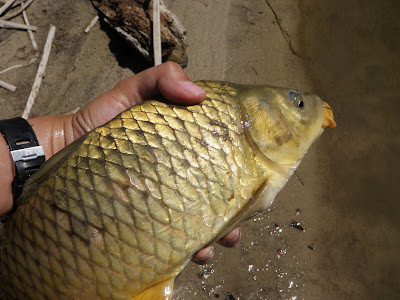 Although the remaining fish had not spooked I decided to head home and end it on a high note.
Posted by gourmetsportsman at 11:20 AM