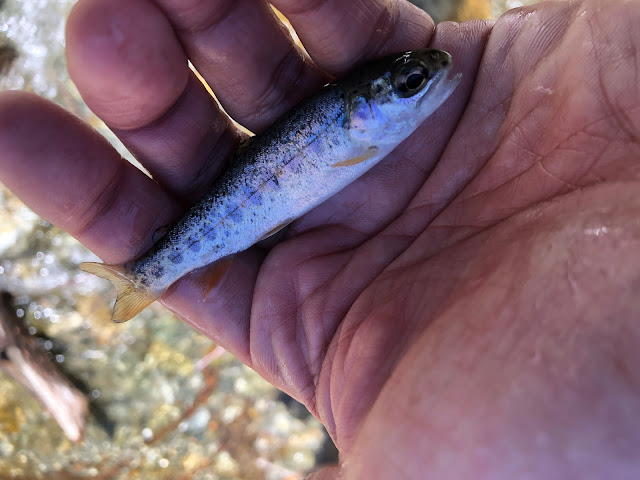 If the start of the day was any indication of what was to follow it wasn't going to be a disappointment.  I got a late start and headed to the bakery to pick up something to pack in for lunch.  When I arrived I realized I left my phone at home so after picking up my lunch and went back home to retrieve it.  On the the way back I took the wrong route that goes through an elementary school.  I was stuck behind traffic as parents were dropping off their kids.  After 10 minutes of that cluster I made it home to get my phone and was off.  As I made it up the mountain I looked down to see the river below and it was chocolate milk.  It was 10am by the time I started down the trail.  The water here looked clear and glacial turquoise but it was low.  Real low.  Unless we get several more storms by summer this place will not be fishable. 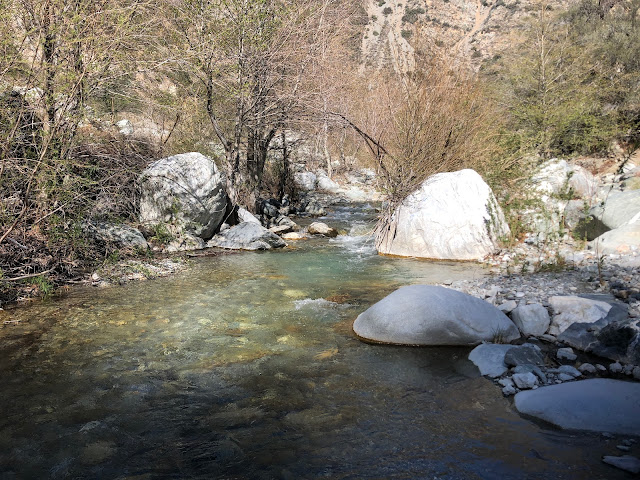 Back when I started fly fishing this was one of my go-to spots.  It always produced a lot of fish but  almost never anything of any significant size.  Most fish were dinks to micro dinks.  On the rare occasion you would pull a 10-12 incher but there weren't many of them.  Over time I quit fishing this place as there were much better local options.  Then the drought years came and this place really fell into dark times.  A survey conducted back then essentially declared this place barren.  We checked out the area once at that time and we confirmed that was the case.  Fast forward a few years I noticed reports coming from a Taiwanese fisherman who was posting large (by local standards) fish on a Facebook page.  So we decide to check it out.  The place never fished so good.  Fish on average were larger than I had ever seen in 20 years.  Now the fishery is on the decline.  The big fish are now gone or at least I wasn't able to get any of them to take.  The pools that hold them are blown out and are now only riffles.  Fish are plentiful though albeit all dinks.  I had over 100 rises to my dry but I was only to  land about 20% of those.  Most fish either came off or the size 10 hook was simply too large for their small mouths.  I fished several miles the area deep was barren so I decided to turnaround and head back.

Posted by gourmetsportsman at 2:44 PM