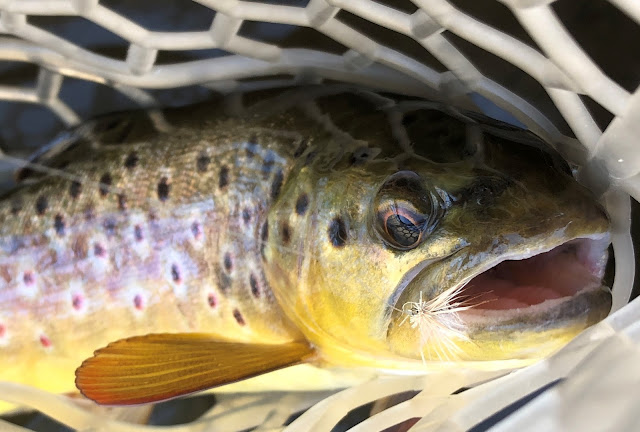 After my last bushwhacking outing I really wanted to get into some legitimate fish.  I had asked Steve if he wanted to head up to the sierra the following week.  He gave me a wishy-washing answer and said if he could it would be only for one day.  One day suicide runs are no longer what I want to do anymore so I looked through the Rolodex to find anyone else who could fish with me on a weekday.  Most of my friends can't get out until weekends but I was trying to avoid that.  I thought of Luc.  Normally he would be on the top of the list but I've asked him if he wanted to go after snowbows in the past but he's always pooh-poohed the idea.  At least that was my impression.  After all he's caught real steelhead he didn't need to go after the imitation versions.  Even with this on my mind, now that he's retired maybe he'd have a change of heart.  I mean he's got nothing to do but fish now anyways.  So I texted him and he was game. 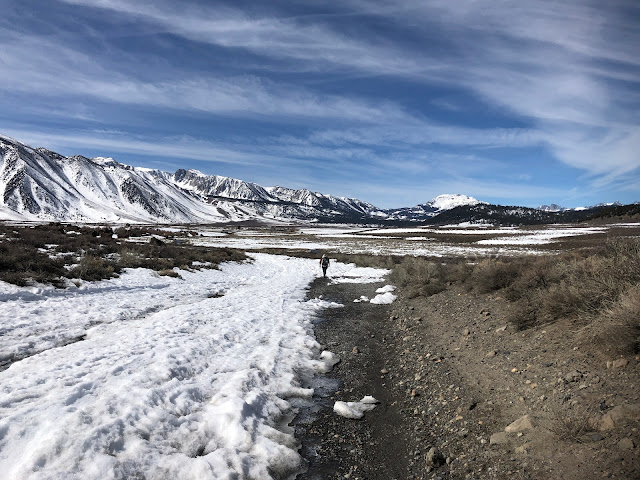 My initially plan was to three days and camp the whole time but I altered that after some serious consideration.  At 68 Luc is in good shape but he's also no spring chicken.  This trip would require us to park away from the water and hike miles in the snow.  I wasn't too sure how many days of that Luc's legs could handle.  In addition night time temps were forecasted to be below freezing.   So after some deliberations with Luc we altered the plan.  We'd fish two days with the option to fish a third depending on how he felt and how good or bad the fishing was.  The blueprint for the trip would be the same as what I did earlier in the year.  First day fish Hot Creek and the second we'd fish hard on the Upper.  I wasn't sure what the conditions were going to be like.  Despite warming temps did we need snowshoes?  I asked some locals before the trip but they hadn't been in the valley for a while so they couldn't help.  So I brought them just in case.  After spending Monday night at Luc's we awoke at 4am to head up north.  We arrived at the parking lot after 10am.  The warm temps had packed much of the snow making the snowshoes unnecessary.  We hiked to the geological site and made our way down. 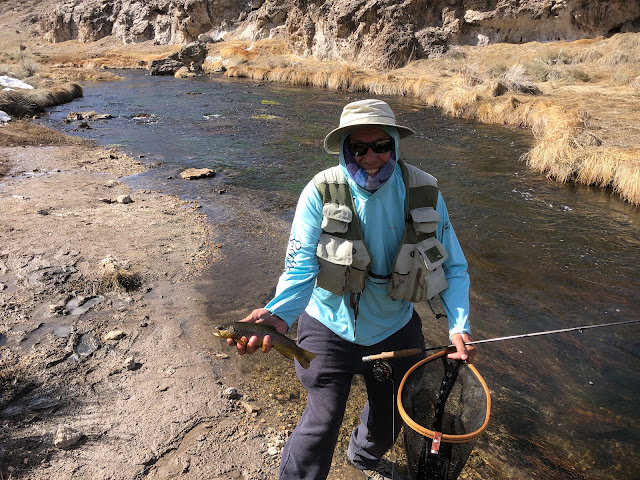 Initial plan was to fish the Interpretative Site to save Luc's legs but when we drove past there were already five trucks parked there.  Disappointed we drove up to see how the gorge looked.  There were three cars already parked there too.  It was discouraging to see all those vehicles but I was reminded that many locals simply park here to hike the road or walk their dogs.  So I wasn't too disheartened and decided to start hiking from there.  It ended up being a good decision.  We made it to the end.  I wasn't too sure Luc could make it there and I'd ask at every put-in if he wanted to enter from there but he just said let's keep going.  Once we made it to the water we had the creek all to ourselves until about two when crowds started to fall in and the hatch slowed considerably. 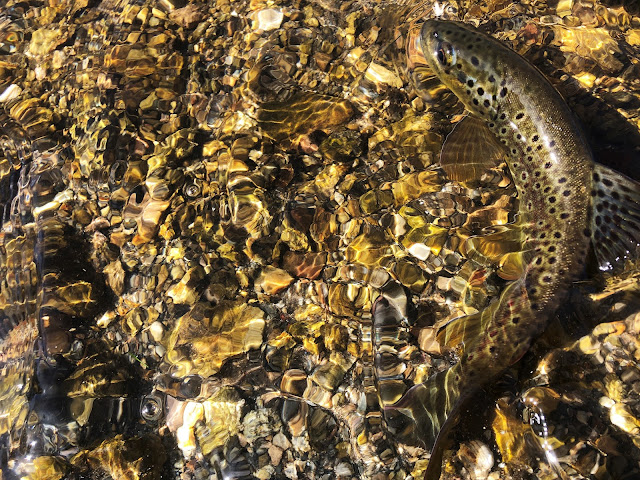 Fishing was excellent until then.  Luc started with a parachute Adams and a dropper.  I would start with a trico Found Link.  I missed my first two rises and I'd miss many more throughout the day.  Eventually I started hooking up on fish.  Same with Luc.  We'd miss or lose ten fish to every one landed.  By the end of the day we'd probably have 100 takes between the two of us with fish up to 13 inches. We had about a quarter mile left before we started to run into other anglers.  By this time the red hot fishing slowed to a halt.  Not sure if the holes were blown up by the anglers or if it was simply the hatch stopped.  We weren't seeing too many bugs on the water so it was probably the latter. Once we reached the first entry point we decided to quit and head out.  There wasn't much water left to fish anyhow and it would have probably been fished out away.  On the hike out I saw that Luc was starting to get winded and I told him to give me his vest.  I'd hike out ahead of him and told him to take his time.  I'd be waiting for him at the truck with drinks and a sandwich.

Earlier when coming up to here I thought of driving the snowed out road but thought against it once I saw the conditions.  I turned around and parked where everyone was stopped.  The last thing I wanted to do was dig myself out of there.  On the way out a truck was making his way up the snow packed road.  From about 500 yards away I was shaking my head trying to tell him not to continue.  At about 100 yards away from him he managed to get his truck stuck and he kept spinning his wheels.  He wasn't in four wheel and he was simply making things worse by trying to gun it out of it.  Once I reached him he had already lowered his window peaking out at his wheels.  I asked him if he had a shovel and he said he did.  I started to take off my backpack and asked him if he wanted me to help.  After trying save his ego and giving me every excuse why he got stuck he refused my invitation and said he just needed to put it in 4 low and he'd be fine.  With that I left him and made it back to my truck some 1000 yards away. By the time we left thirty minutes later he'd still be there. 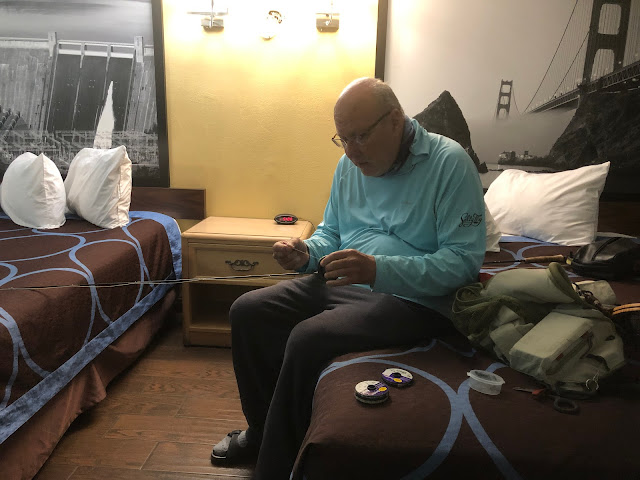 A sandwich was ready for Luc when he finally made it back to the truck.  And after eating resting a bit we made our way down the valley to our roach motel in Bishop.  There we prepared for the following day.  Luc would teach me a new knot and I'd show him how Tom Loe rigs his egg patterns.  While carrying out Luc's vest I noticed how heavy it was and told him to remove most if it as he wouldn't need all that stuff tomorrow.  Knowing the hike to come I wanted him as light as possible.  We'd go out to dinner once we prepped all our gear.  The first option Mercado Mexico was closed so we hit the Roadhouse instead.  Went to bed early and I ended up waking at 2:30am and couldn't fall back asleep.  To be continued...

Posted by gourmetsportsman at 8:39 PM