Nothing Impressive On The Last Day 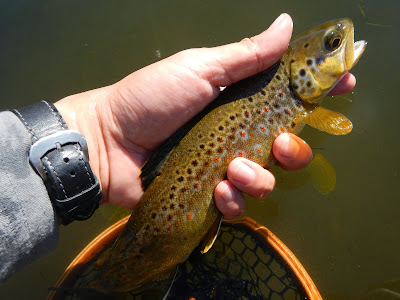 With the bad taste from yesterday, I was pretty confident the Lower would lift our spirits.  The Lower at one time could have been considered my "homewater" despite being over five hours away.   I haven't fished though in years.  The last time I can recall fishing this river was 5 or 6 years ago.  It has changed somewhat from my heyday.  First in the wild trout section you no longer can drive to the river as the road is now fenced off.  This is a shame as I always liked parking beside the river and having lunch.  Second the tules and surrounding brush has dominating the banks much more than I recall.  The water still is a zoo, every turnoff had a parked car and every bend had a fisherman. 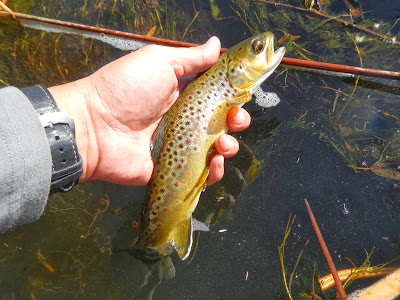 We parked and started fishing I took a bend and fished on a 4 foot bank and casted ahead of an overhanging tree limb allowing my nymph tandem drift underneath the mess.  Every 5 or 6 cast I managed to hookup.  Unfortunately most of the fish would come off before I had to figure out how I was going to get down and land the fish.  Most of these fish were small so I didn't really care.  I finally hooked up on a legit brown about 14 inches so I fought the fish dragging it upstream until I could reach a slightly lower bank and jumped down into river.  Since this section was at a rather fast bend I had to manipulate the fish so that it wouldn't run downstream while at the same time trying to get my net off my waist pack.  The fish ended up coming off when I missed netting it and the brown ran in between my legs. 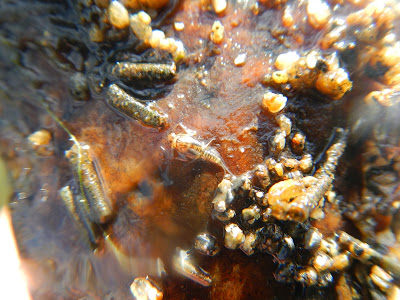 After losing more and more flies in this section I decided to move downstream toward Tuck.  He let me know that he was finally catching fish too.  I hopscotched to the next section and fished this area without any luck while Tuck moved past me to the next bend.  I caught up to him and once I did he was on a fish, I dropped down to the water from the bank and helped him land his fish.  Afterwards I moved past him to the next bend. 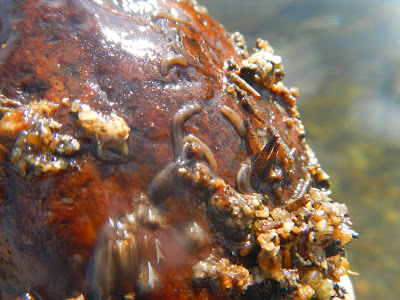 At this section I managed to land my best fish of the day.  Nothing impressive maybe 10 or 11 inches.  I manage few more small fish when Chul reached me and since he was rigged with a dry I told him there was sporadic rises at the tailend of the section of tules.  I left him to noticed there was a group of fishermen ahead of us. 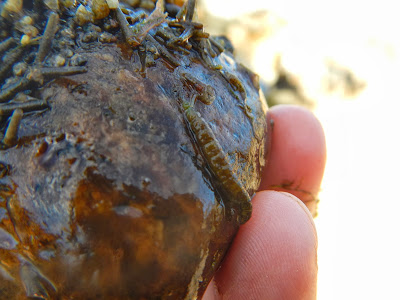 Chul had no success trying to get the rising fish to take his fly and I suggested we drive down and see if could find some free water and left the wild trout section.  I was hearing gunshots while fishing and decided I wanted a duck so I traded my fly rod for a shotgun and headed downstream.  I hiked down river and saw no duck but did see some rising fish and called the group to come over. 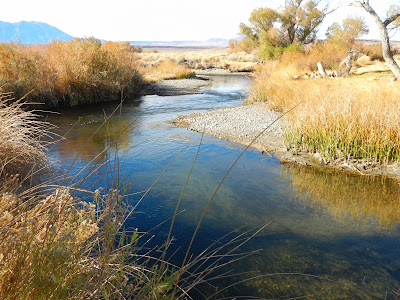 ﻿﻿
When they came I showed Chul where the fish were raising and he managed a few on the surface.  He finally broke off on most likely the 16 incher I saw rising.  I moved down with shot gun in hand and saw no ducks and headed back to the group and swapped the Model 12 for the 5 weight.  I couldn't get any fish to take my fly.  I even tried a dry when I saw a fish rising in a back eddy.  None of those surfacing fish were willing to take my fly.  Tuck managed several upstream of this area.
﻿﻿﻿﻿﻿﻿﻿﻿﻿﻿﻿﻿﻿﻿﻿﻿ 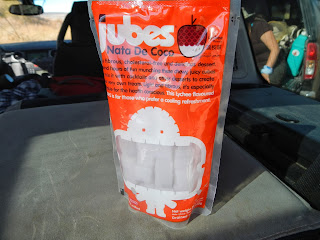 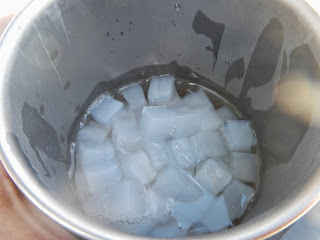 Having to wake up beyond early on Monday, Chul and Erika left before Tuck and I.  We said our goodbyes and Tuck and I moved to other waters downstream.  We finally found a promising spot.  I left him there while I went off hunting.  The wind picked up so Tuck stopped fishing.  He was done. ﻿﻿﻿﻿﻿﻿

﻿﻿﻿﻿﻿﻿﻿﻿﻿﻿﻿﻿﻿﻿﻿﻿﻿﻿﻿﻿
Since Tuck was done I decided I wanted to check a cannel that usually holds at least one duck.  We
drove to the area and I left Tuck with the Rover to relax and drink himself silly with some Pale Ale.  I walked down the cannel for a few minutes before a single mallard flushed out of a bend but it was too far for a reasonable shot.  After that it was game over and time to head home.  It was not quite the weekend we were hoping for but that is the life of a sportsman.  Its not always a winner.  At least the company was good despite the poor fishing and hunting.  I will be back with the dog and those ducks (and quail) that eluded me will be seeing me again very soon.﻿﻿﻿﻿
Posted by gourmetsportsman at 7:44 PM