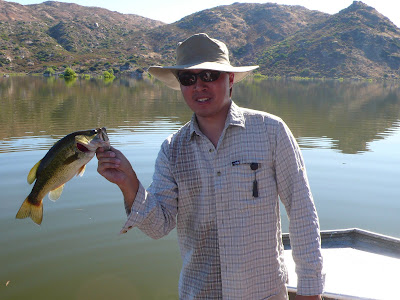 My return to Barrett Lake was quite a different experience from my last outing last month. This time I was accompanied by Ed who has fished this lake many times. He has experienced those epic 100+ fish days that you read about this lake. We arrived on time at the first train in at 5am. This is a brutal experience. Having to wake up at 2 in the morning to go fishing and drive 2 hours south is the definition of insanity. We probably began fishing just before six after getting our boat and rigging up. We started at one cove and struck out although it was a very bassy area. I started with Webb's foamhead popper. I believe Ed started with a purple wooly bugger on a floating line with a 12 straight leader. While we were drifting out of the cove we decided to move on and then our motor would not start. After repeated attempts to fire it up, we sat there slowly drift. finally we got the boat going and hit a point where Ed loves to fish. It was 7 am and Ed began hooking up. It was a good mix of Bluegill and Bass. I switched to my 150 grain and the Barrett Shad. I got several bumps but couldn't hook up. On one cast I over shot and my fly landed in a tree, I managed to to free it and once it hit the water I saw a fish take it. Textbook bass fishing. I had it on for a few seconds before it went unglued. I was getting extremely frustrated as Ed was consistently hooking up. I switched flies to the Rattle Shad, a fly that I had great success last month. Nothing. I noticed that all the flies Ed was using were dark, mostly purple and olive. So I looked through my box for a dark fly, since the last outing I caught all my fish on whites, chartreuse, and bright I had very little in the way of dark flies. I switched to a purple rattle eye clouser. Finally I got bit by a hard fighting aggressive largemouth. He was a stocky fat one pounder (pictured above). On the 5 weight he felt like a tank. He just did not want to come in the boat. Eventually he did after the release I casted again. This time a fat Bluegill. Ed continued to out catch me with a mixed bag of LM bass and blugill eventually we decided it was time to move on. 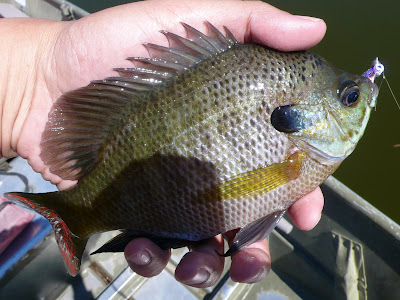 We moved to to another area I dropped anchor and noticed it was not deep. Maybe a few feet. We caught more fish and I decided to give the Barrett Shad another try. The fly was being stuck but I could not hook up. This outing was quite different from my last. The fish this time, with the exception of a few, did not aggressively take the fly. Instead the seemed to just inhaling it or sipping at it. I most have had 10 or 15 fish all day spit out my fly before I could set the hook. Quite a change from last month, once the fish took the fly he hit it hard and you knew it. Ed outfished me here as well. I think I managed a few here. I asked him if crappie were in this lake and he said his brother once caught a huge one before and within a few minutes Ed hooked up a nice crappie himself. 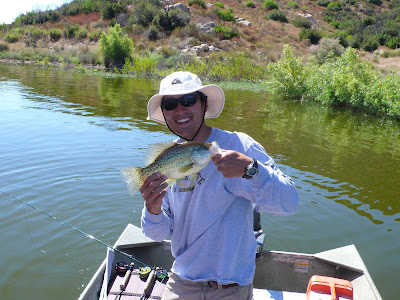 We move on to the Hauser Arm. I was excited as this was where I did so well the last time. I caught several in one section when I switched back to the Purple RE Clouser. It was midday and hot as hell the fishing slowed considerably. At this point the wind picked up making fishing a bit tough. Fish were hard to come by. The heat was unbearable. We were drenching ourselves with cold water from our coolers and driving around the lake to cool ourselves down.

I noticed that all the fish were responding to dark flies only. In my preouting intelligence gathering from my last month. I recalled Bryan Webb telling me I should have gone in June because thats when the damsel hatch occurs. I remembered that and concluded that the fish were probably targeting damsel fly nymphs rather than shad and silversided minnows that are the major forage for these fish. With that in mind I remembered that I had fly that Gary Borger showed me at a fly show many many years ago. I hadn't really ever fished with it and I nearly forgot I even had it until recently. I'm not sure if he ever published it or what he even calls its it but its bascially a peacock streamer. (I've emailed him to see what he calls it, hopefully he response back). I tied one on.

We came to a point and and Ed parked the boat onshore. On the first cast out the fly was bit hard and the fish shuck his head many time but eventually went unglued. Ed was beat he booty-fabbed himself a makeshift bed in the boat and passed out. I continued to fish. This was literally Bluegill central. On almost every cast I caight nice sized Bluegills. I must have caught a minimium of 20 here maybe more. I was surprised that Ed never got up considering all the ruckus the fish were making.

Ed did eventually waked up from his coma and fished the area but I think I'd pretty much cleaned it up. He may have caught one, we sat there and noticed the nearby boat hook up on conventional gear. Once he got it in the boat we overheard him say it was 5.2lbs largemouth.

By now the wind was really howling. We decided to try the other arm even though Ed had mentioned that he has never had much success. We managed a fish here and there. It was 3:30 and we were cooked. The fishing had only gotten slower and slower. We decided against staying until close as planned and to try and make the 4pm train out. 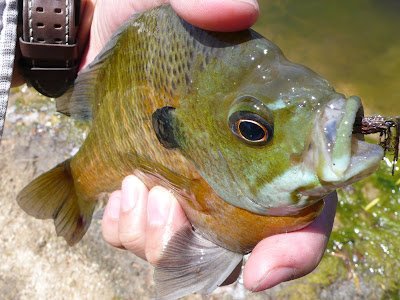 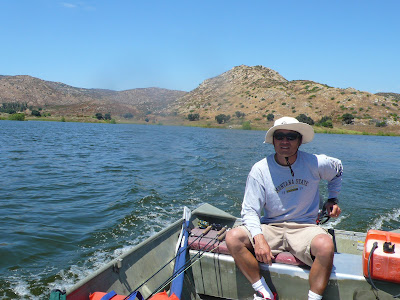 All in all we must have caught at least 30+ fish a piece. Most of mine were Bluegills with a handfull of bass thrown in. Ed had a good mix of everything. He could have completed the Barrett slam with a smallmouth. It was a fun day but brutal. I'm not sure how hot it was it was the hottest Ed has experienced here and he said his been there during some massive heatwaves.
A few observations this time:


I forgot how much bluegills can be. I thought about bringing my 3 weight and decided against it. Even though it may have been almost impossible at times to cast I would have loved to get a few of those on a lighter rod.
Posted by gourmetsportsman at 11:14 PM