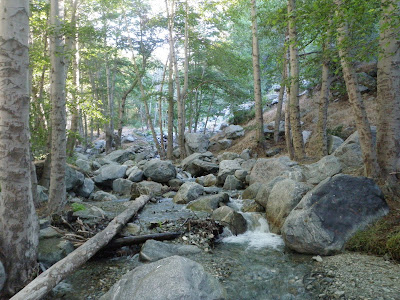 I fished San Antonio Creek for the first time today with Ed Hwang. Its been at least 8 years since I heard of this place. I remember looking at the Reel Maps of it earlier in this decade at Marriotts. I never did make it here until now. Ed had fished it before a few years ago. Since Ed only had a few hours to fish and the creek is conveniently located near the road we decided to give it a shot.

After getting lost, we finally made it to our destination. We parked near the trout ponds and I hit the first pool we saw. On the second cast I caught an average size (for here) rainbow. I managed another, this time smaller fish. I decided to move . I skipped several pools in search of more water. This is seriously some small creek fishing. There is not much water. The more I hiked the less encouraged I was that I would find more water. So I headed back down. After finding Ed, we began fishing downstream and hit those same pools again. I caught the biggest fish of the day in little more than a trickle of water. He took my dry fly hard and basically hooked himself. I caught a few more in that hole and moved on. Being his usual self, Ed fish subsurface starting with Czech nymphing, indicator nymphing and the moving onto wet fly fishing. On this type of water I'd never use such tactics. I prefer to dry fly and since it is so hard to come by I'll do it whenever I get the chance. I fish plenty of subsurface in the Sierras. Ed did well though probably better than I which makes sense as most of a fish's feeding is done below the surface.

Ed really killed it on the wet fly. No matter the technique whether stripping, swinging or whatever, he got bit.

Now that I've seen the creek and have fished it, it is unlikely that I'd return. Although I love small stream fishing, this is a little too small for my taste. I think Bear Creek at the West Fork would be the smallest I prefer.

We caught a bunch of fish in a very short amount of time. We headed back around noon. All we caught were rainbows, no browns. Next week Ed and I hope to make it out to the San Bernardino Mountains to fish rivers with a little more water; there we should get some browns. 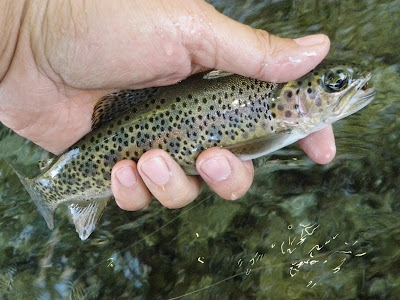 The largest fish of the day. 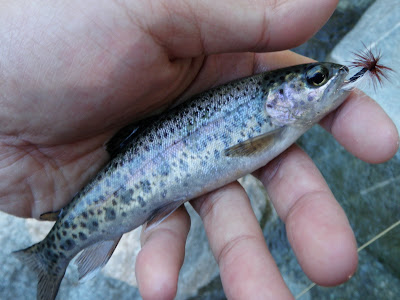 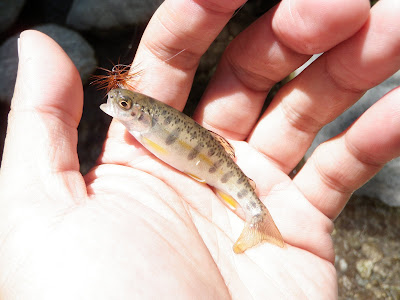 Dinks. These would hit you in the chest when you set the hook. I fished streamers on Saturday that were bigger than this guy. 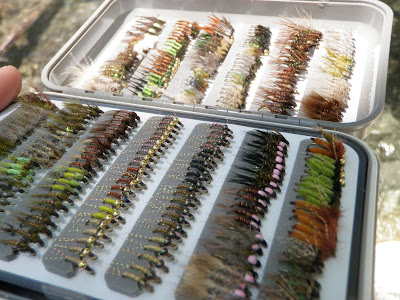 Posted by gourmetsportsman at 2:24 PM