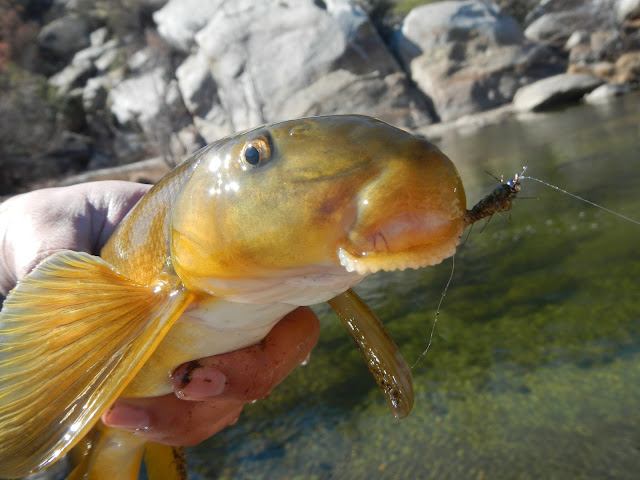 In the morning with Erika out cold, Tuck, Joseph and I left Chul to try and wake her up as we headed toward the river.  We would meet up later when she got her self together.  We found a nice stretch of promising water and the two of them hiked downstream as I took the pool and seams below us.  Once I navigated through the boulders I found a trout at least 16-18 inches a narrow feeding lane.  My continuous drifts though proved worthless as the fish only laughed at my attempts.  I moved up upstream looking for more agreeable fish.  With the water still cold from last nights freeze, the fish remained tight lipped.  I hiked back on the road to find the boys only to have the same luck.  Somewhere during this time I lost my Contour Roam.  By this time Chul and Erica made it to us and see drove to look for more promising waters as the weather warmed the river. 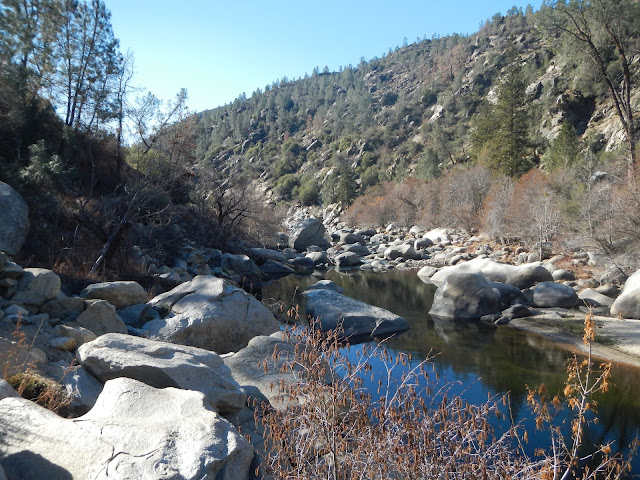 Waiting for the water to warm up, we decided rather than wait at our location we would drive upstream to see if there was any water that had more potential.  After awhile we concluded our original spot was best and head back to it.  By this time we figured the feeding would be more active.  Instead of rock climbing down I would head off with Tuck and Joseph downstream and try different water.

We found a nice spot where we could see some rather large fish cruising along the sand bottom.  Once we made it down to the river we saw more fish.  We concluded that the ones we saw must have been suckers but there were a few trout feeding in the rocky portion.  Tuck fished it and I headed above stream of him.  After only ten minutes or so I looked back and Tuck and Joe had moved on so I took over that hole.  After a few drifts above the rocky section I managed  to hook up one a nice trout.  It flashed me his vibrant red sides and then came loose after a nice few runs.  The few fish that were cruising around were showing themselves and I tried to hook one up.  Eventually my bobber dripped and I set the hook hard.  Having lost now two good fish, this time I was not going to gently play this fish,  I bullied him in after he continued to make a few runs.  I was determined not going to lose another fish.  The fish fought hard and I landed him just to realize it was a 16- 17 inch suckerfish.  I moved upstream and fished for an hour or so until Tuck pulled up in his SUV on the road and called me back.  I asked everyone how they did and no one managed so much as a bite. 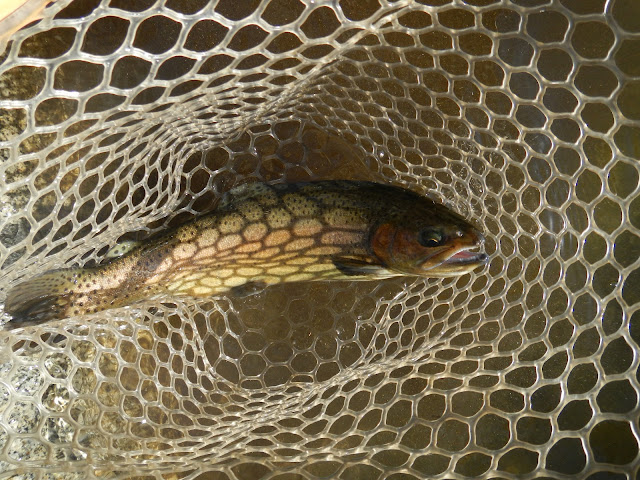 Since Chul's hole was the best of the weekend we decided to head back there and try it again.  Tuck and Joseph headed out first as the rest of us rerigged.  I made it down just downstream of the hole and Tuck was rigging up a three fly set up so Chul took the first cast.  Within a few minutes he hooked up.  Joseph having fished just upstream where he caught a few the day before made his way downstream and then took the spot and after a few cast he hooked up.  Then Tuck now rigged tried the hole and he then hooked up.  I managed to make my way upstream to the hole and started to cast but after several minutes the hole shut down.  I moved downstream with Joe and Tuck and fished the next few hour without any luck.
\ 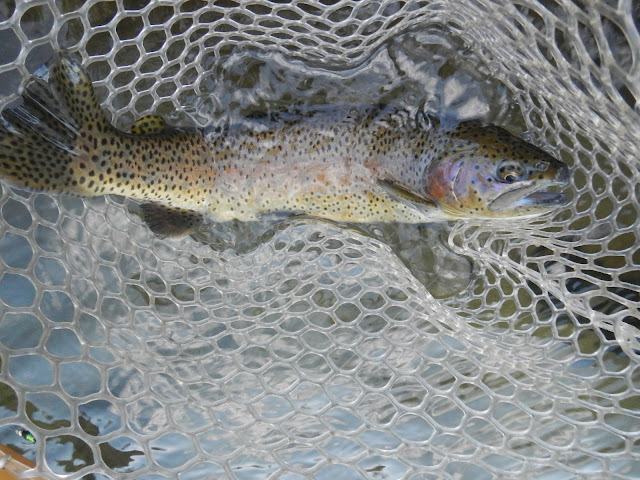 After a while I decided I didn't want to fish the unproductive pocket water and headed back to the hole.  I found Chul and Erika there after fishing upstream and catching a 7 incher.  Erika had several strikes and kept popping off.  Eventually she had a nice one and snapped the tippet at the wind knot.  So I took the hole and after several casts with nothing to show I wanted to move to a nearby submerged boulder.  I left me line in the water and as I moved off my submerged boulder, I slipped and fell into a waist deep water.  As I climbed out of it to reach the other boulder I felt a huge strike on my rod.  Having my back to the line I rotated my hips and stripped the line while setting the hook with my rod in a sidearm motion.  Turning toward the fish now with my rod bent, Chul asked if I was caught up on a rock.  I said no I'm on fish and then the rod began to dance.  Chul jumped in the water readying himself to net it.  The fish fought hard on my T&T Helix 5wt.  I was determined not to lose another trout.  I was going to land this fish no matter how ugly and unconventional the hook set was.  The tippet was endangered of breaking as the fish weaved in and out of the submerged boulders.  In time I managed to get the fish out of danger and Chul's first attempt to net it failed but got him on the second try.  I tried to get a better picture of it other than a net shot but just when Chul was just about ready to take a pic I pulled a Tuck and the fish wiggled out of my hands.  After a good laugh, Chul couldn't believe I caught that fish.  I looked at him nonchalantly and said I meant to do that.  What you've never seen the falling and catching technique?  As the old adage goes you can't catch fish without the line in the water.

With Erika's rod out of commission I asked if she want to use my rig and see if she could get one as well.  After a few cast she had a hard take and she pulled it out of its mouth.  With the day ending we called it quits and headed to the trucks.  We waited for the boys to make it back.  They made it back and let me know they fished hard to get another fish a piece.  We headed back in town for pizza before making our way home.  All in all the trip wasn't a fantastic in a fishing point of view but these trips are just as much about camaraderie than it is about fishing.   So its always fun hanging out with friends, ribbing each other and general bull shitting that comes with juvenile behavior.

Posted by gourmetsportsman at 9:18 AM