After this mornings heartbreak, I chose to hit the water one more time this afternoon. A slight breeze caused chop on the water making it difficult to see any fish in any water deeper than calf level. So all I could spot are fish near the banks. The first carp I saw, I didn't even have a chance at casting to it before it spooked. Moving down stream I saw a small bass or perhaps a bluegill and before I could cast it fled. The second carp I had a good chance and threw the fly just in front of it but it chose not to take my offerings. With only three casts to it, it moved into slightly deeper water and I then lost him in the choppy water. Eventually I got bored of trying to sightcast so I blindcasted into a narrow ambush point and foul hooked a turtle. After releasing it, I moved down the river to see at least 4 bass jump. All out of my reach so I wader toward them but no fish were willing. I decided to head back but before I left I decided to check out one more time the area I got bit this morning. I saw the hump of a feeding carp in the shallows. I moved out of the area and headed 15 yards upstream so I would not spook him. Feeding facing the cattails, the carp gave me a difficult cast especially with the wind in my face. All my casts missed the mark, not one landed toward its face. With a errand cast, I plopped the fly too hard on the water and the fish was gone. I headed back to the car spooking three more carp all of which gave no opportunity for a cast. 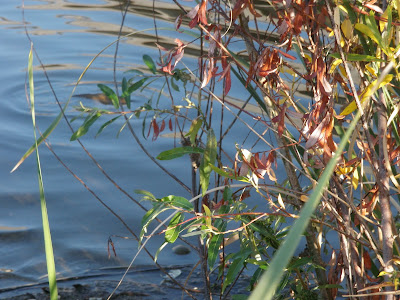 Notice the rings at the top left. The hump of the carp may be seen. 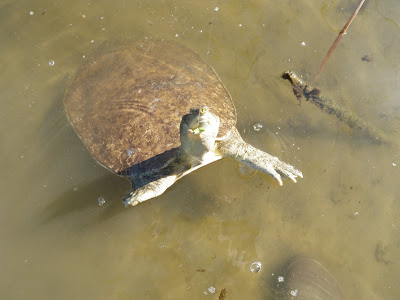 Sorry pal that was unintentional. The turtle just before release.
Posted by gourmetsportsman at 7:24 PM