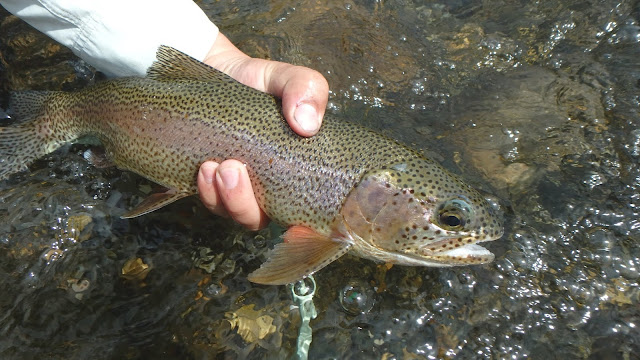 After stopping at the Slide Inn for licenses, flies, fly tying tools and intel we were on the water sometime after 3pm.  We headed toward the WF Madison campground area.  I'd have my first Montana fish in a matter of a few casts.  I fished a side channel and casted my hopper with and ant dropper just below a branch of a tree.  After a couple drifts a small brown took the ant pattern.  After catching the fish I returned to the truck to get my river crampons as it was extremely slippery.  I had asked Jeremy at the shop if I should wear them and he definitely recommended them but in my haste in wanting to fish I neglected to put them on.  After sliding in the slower water of the channel I thought it best to go back and get them. 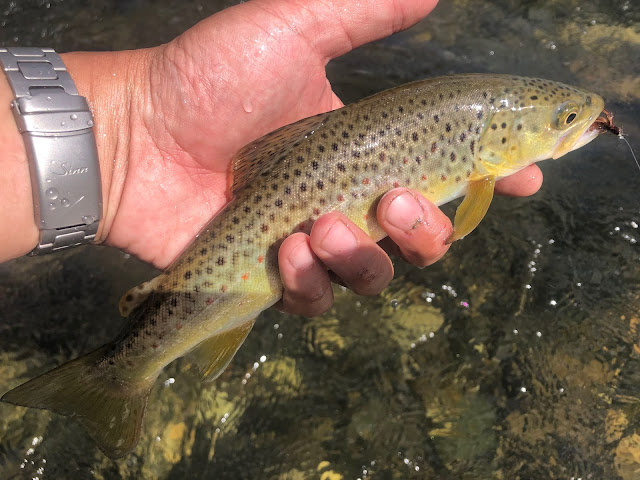 I'd get into the main portion of the river and was definitely glad I grabbed the traction device as the river was swift.  Wading was tiring but I'd eventually get another brown.  Again another dink. I didn't travel all the way to the Big Sky Country for dinks. After a couple hours having bypassed lunch we looked for a place for a bite to eat.  With very few options to chose from we went to the the Grizzly Bar and Grill. 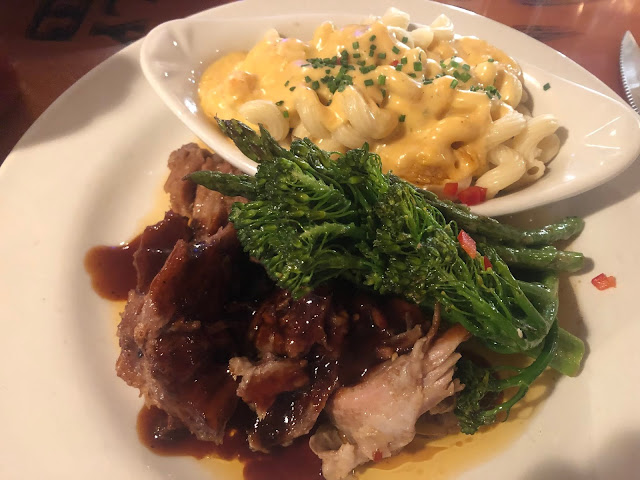 This establishment usually requires a reservation but they managed to get us a seat but having a seat didn't mean we would be served anytime soon.  They were packed and we didn't get our food for a long while which was eating up our fishing time for the evening.  Dinner was excellent and we drove drown to Three Dollar Bridge for some evening streamer action.  I don't recall if we managed any fish that night but I believe I did get one strike.  Once dark we headed toward Raynold's Pass campground for the night. When we woke I fished around the campsite without any luck.  We did see a bald eagle nesting in a tree on the river which was nice.  Bypassing breakfast we headed toward Three Dollar Bridge for a morning season of streamer fishing.  There we would met up with a fried of Chul's. 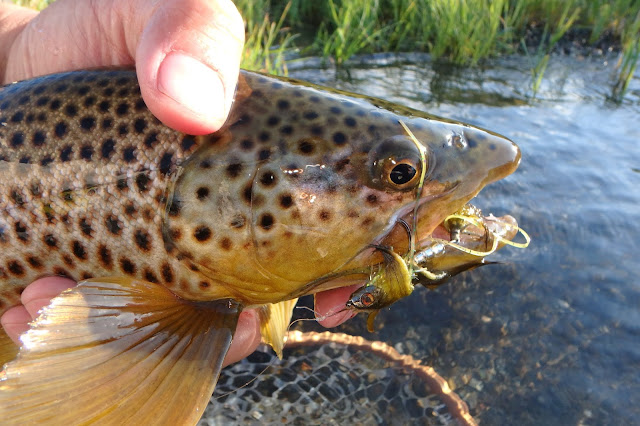 After rigging up I took off first armed with an articulated fly I created a few years back to use on the Upper Owens.  Conservation groups are trying to improve the habitat around the river and have put down walking planks around the banks for anglers to use.  It wasn't long before I got my first streamer fish in Montana.  It hit almost immediately when the fly splashed on the water.  Catching a decent fish on a streamer on the Madison was goal of mine on this trip having watched vicariously Kelly Galloup do so both on television programs and youtube videos over the decades.  As the sun rose higher I came back to the truck to grab my hopper dropper rig out of the Toyota. 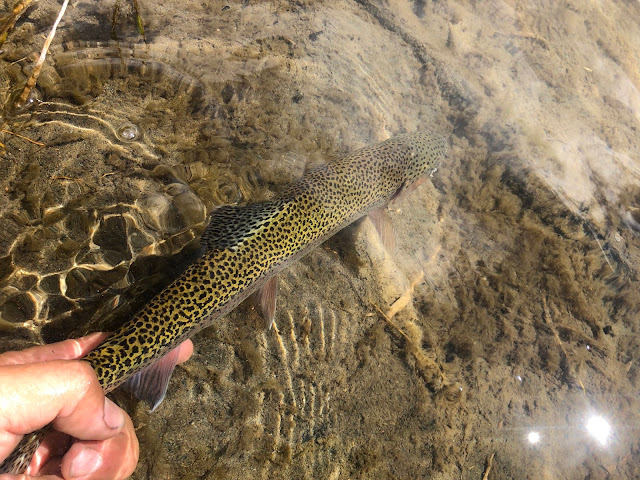 While my fishing buddy was chatting up his friend, who was traveling his way back to California from Alaska, I took off again upstream.  I only managed a couple on this set up nothing significant enough to write about.  Having bypassed breakfast I was starting to get hungry and went back to the truck to see if we had anything I could eat.  We were low on supplies and with all the cooking gear buried in the bed of the truck so I made myself a freeze dried backpacking food we kept for emergencies. 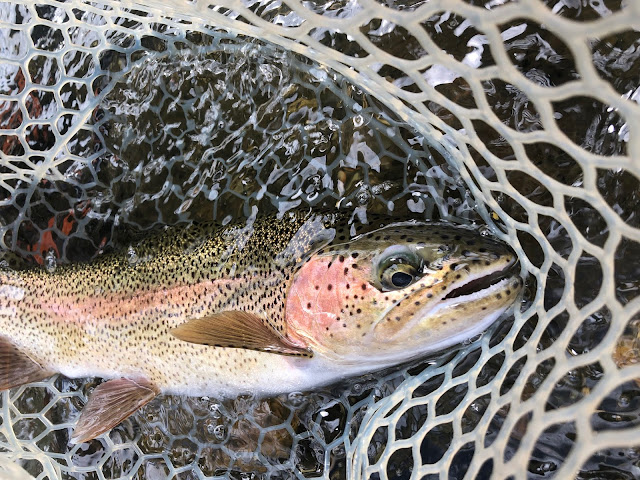 I waited for them to return to the truck and during that time I chatted up a nice couple from Minnesota who visits the area every year.  Eventually the crew returned and after a brief break we started to fish below the bridge.  We walked about a mile down before we began fishing upstream.  It wasn't long before I managed my first fish of the afternoon session. 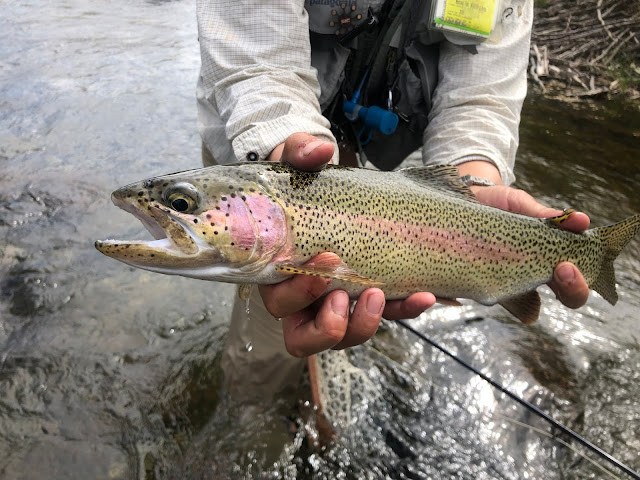 We managed a few more long the way back to the truck.  At that time we headed to the shop to gather some info and to see if there were any cabin available for the night.  Kelly let us know that they were fully booked but told us to try Driftwater Lodge down the road which offers the lowest rates on the Lower.  For the evening Kelly told us to try the river section above Hebgren Lake near the Campfire Lodge Resort. 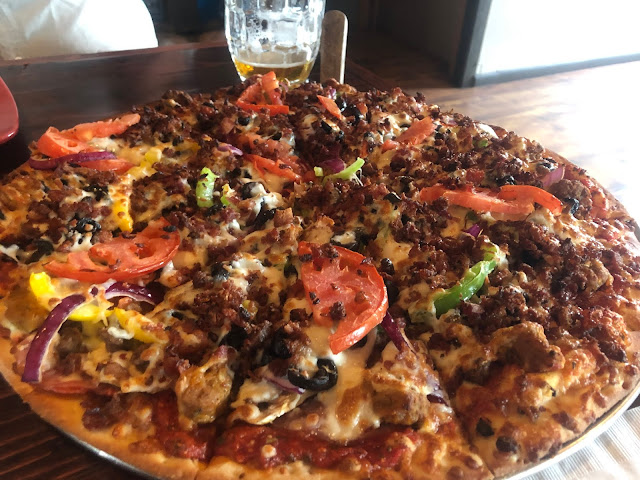 Before fishing for the evening we headed to the lodging to secure our room.  Their restaurant was opening and since we bypass lunch we decided to grab a bite to eat before fishing the night.   Food was excellent and after a brief respite we made our way up the hill toward Hebgren.  Water was swift.  We were told by Kelly how to cross the river safely but we weren't sure which boulder landmark Kelly mentioned to us.   After multiple days on the road without proper sleep and shower our brains were simply too fried to understand the drawing he gave us.  Later I would figure out the landmark was further downriver.  Evening fishing was tough and while I managed a strike I failed to get a fish on.  The fishing partner managed one before it was too dark to continue.  We returned to the cabin for our first comfortable bed and shower of the trip.  Accommodations were clean and nice.  I would definitely book again in the future. 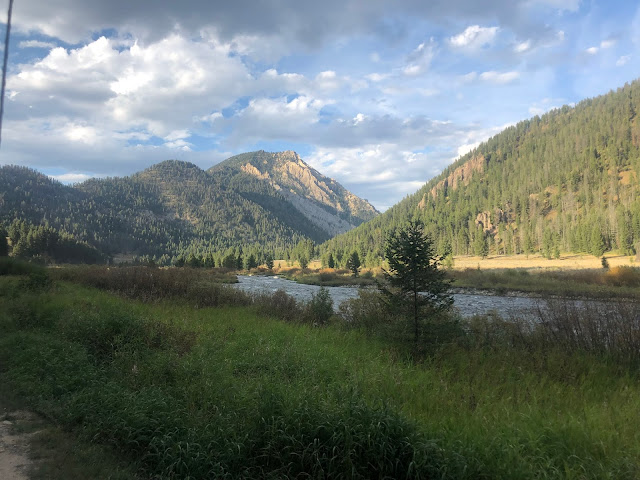 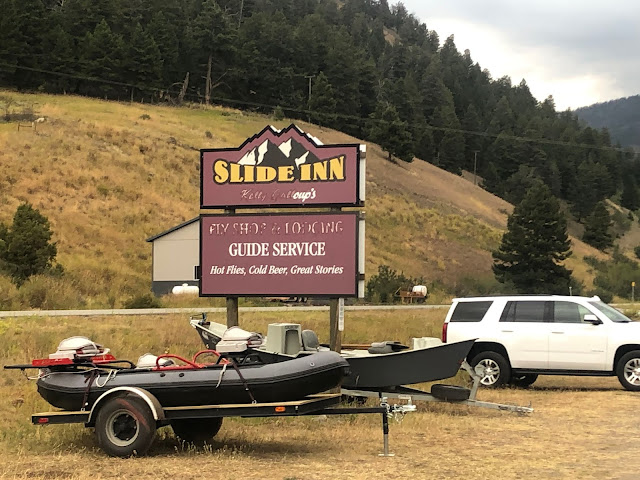 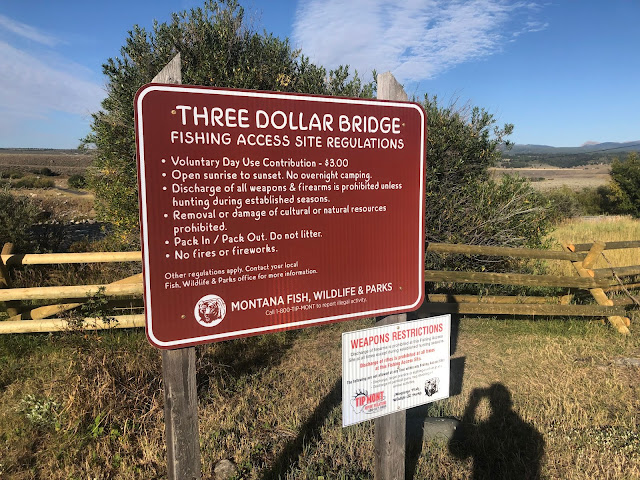 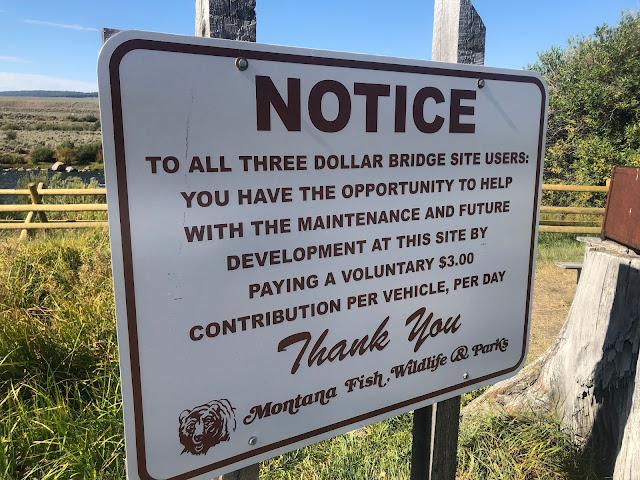 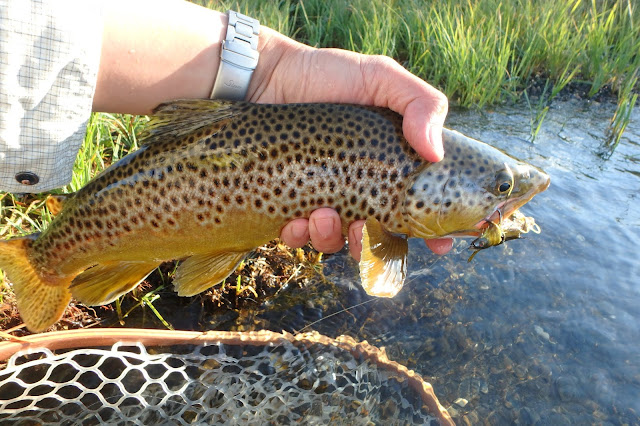 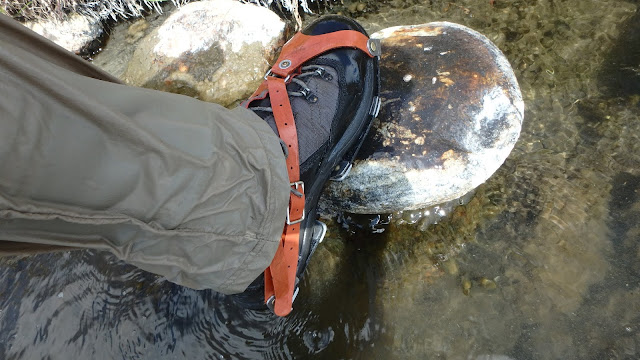 Posted by gourmetsportsman at 11:52 AM