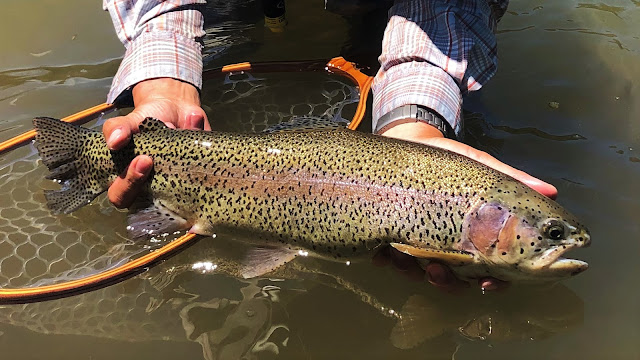 We hit the coffee shop first thing in the morning before taking to the road.  The Million Dollar Highway did not disappoint with the alpine views.  Our destination was Ouray.  The main reason for this trip.  Kelly had seen some photos years ago of this town and thought it might be a good place to buy some property.  For the next five years he'd have to wait to see it until now. 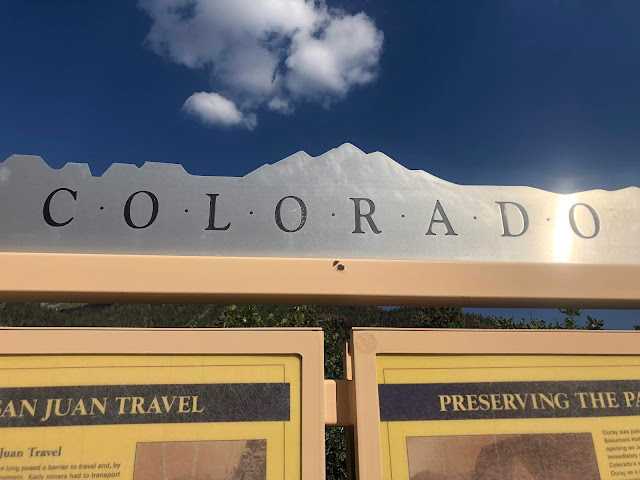 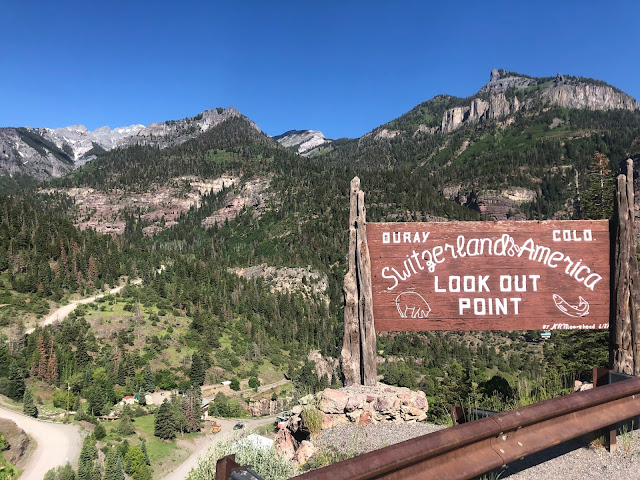 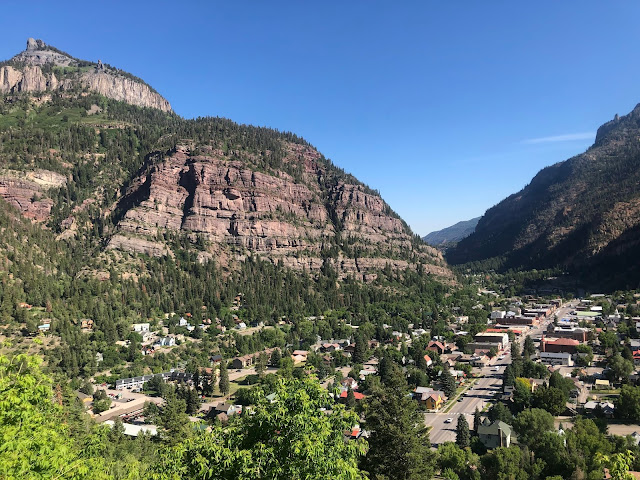 We reached the town around 8am and checked it out before having a hearty breakfast of Country Eggs Benedict which is smothered in country gravy rather than Hollandaise.  Stuffed and having seen enough of the town we set out to the Uncompahgre. 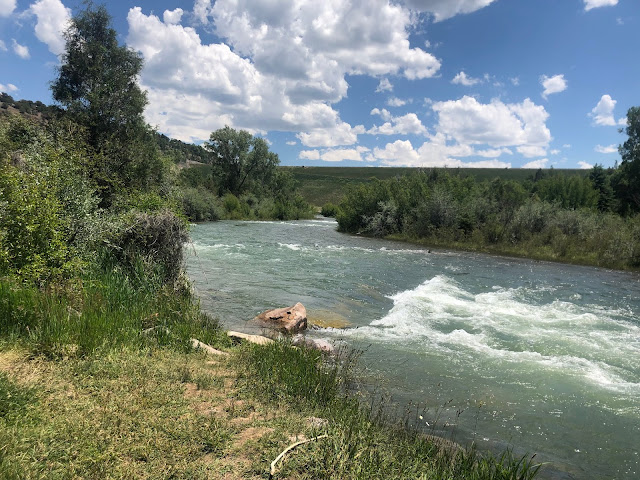 Someone at the Casting Club suggested Kelly check this river our when we were planning our trip.  Curtis and Durangler's also suggested we check it out.  So it was definitely on the agenda.  This freestone tailwater was developed with the help of Trout Unlimited to improve habitat for trout and trout fishing.  It then stocked with rainbows, browns and Snake River Cutthroat.  Though not native to the area I did want to catch a SR cutt to add to my species list. That though wouldn't happen on this trip but that wasn't too big of a deal as it wasn't a primary objective for me.   A primary objective though was to catch any fish in Colorado and having failed the day before it was time to get on some fish.  Any fish. 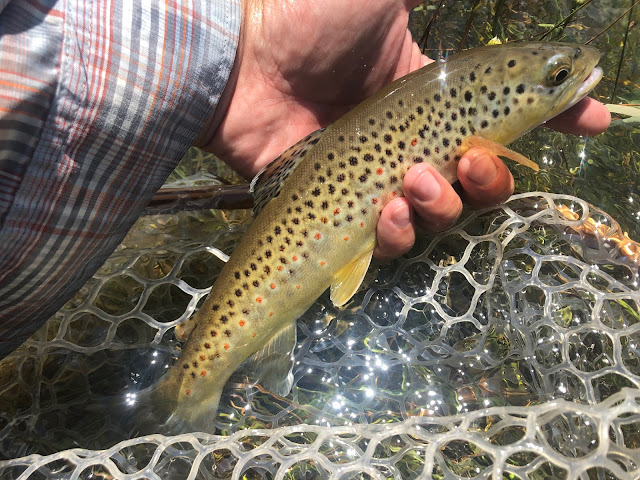 We arrived at the parking lot where two other anglers were gearing up.  After speaking with them for a while we learned that one of them was from the South Bay (where Kelly lives) and got along great before he took off to the water.  I prepared 5 weight for drop shot nymphing and set off to the river.  I started with a size 18 nymph (I can't recall which one now), a Pat's rubber legs and a 3/0 slit shot.  After failing to connect on multiple casts,  I recalled what Kelly Galloup once said "the difference between a good day and an exceptional day usually is one more split shot."  So I add another 3/0 and with the next cast I was on my first ever Colorado fish.  A brown.  Nothing special but at least I was on the board and had sucessfully caught another fish in another state. 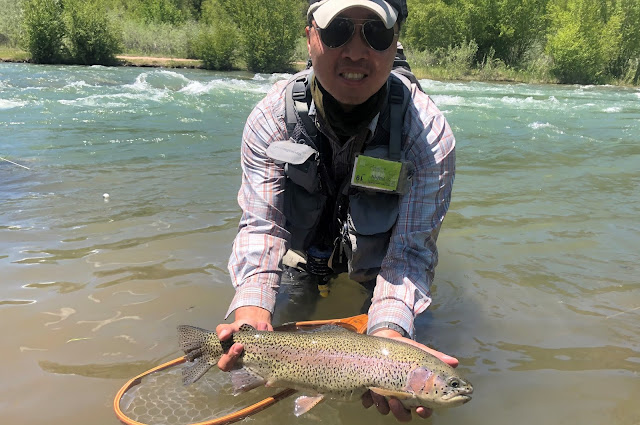 I moved downstream and fished a seam where I was perched above on a peninsula.  Within a few casts I was on again.  This time a much more significant fish and almost instantly she took me downstream.  I recalled another lesson from Galloup.  Fish will always run opposite of pressure so if yo crank on him while running downstream she'll continue that way.  I eased up on the pressure and the moved toward the bank.  She now was directly under branches of a tree.  I put only enough pressure on her to keep the line taut.  I slowly eased her in as she started to move back to her original feeding lane.  Once cleared of the obstacles I rose my rod and put on some pressure eventually getting her in the net.  The angler from South Bay now at the bank and watched me net my fish.  He took a few photos for me and I gave him and his buddy who later showed up a Rubber Leg and told them how to set up their rigs. 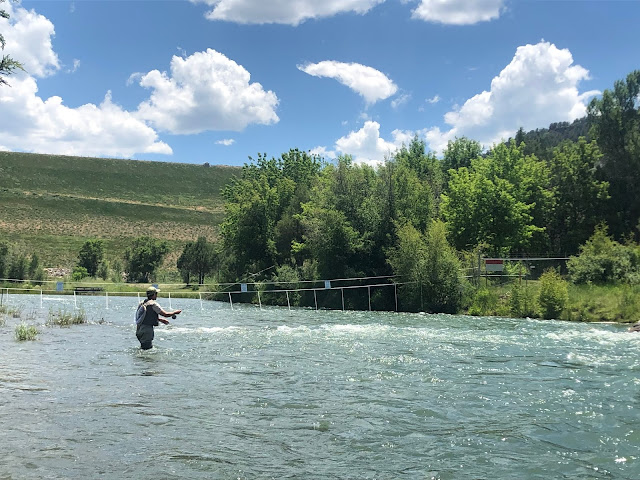 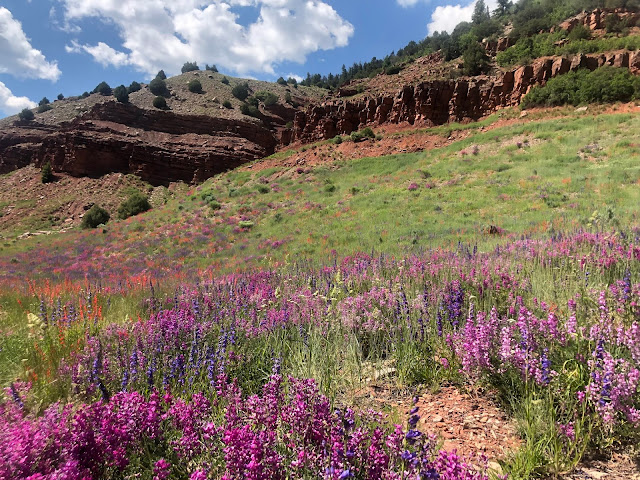 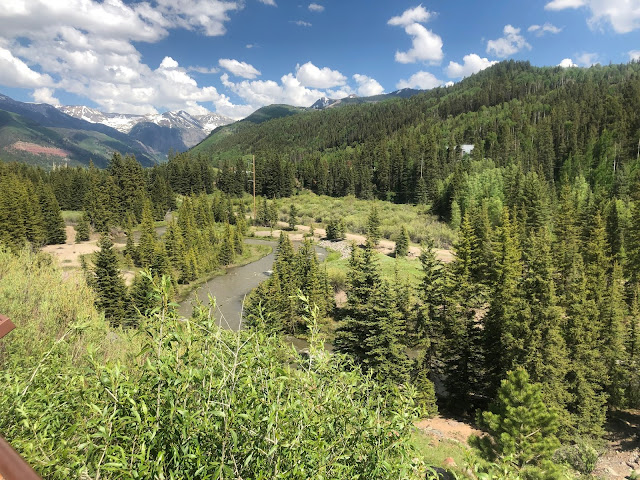 We would forgo lunch at the river and decided to get something along the way only to find out options were limited.  We eventually stopped in Pico for a late lunch in a saloon.  It was the only option at this point.  It was actually a very nice burger.  For the entire six hours drive we were treated to views of Colorado mountains and then into it's desert.   Along the way we'd run into a summer monsoonal shower that helped wash the truck and gave us a nice rainbow towards the border of New Mexico. 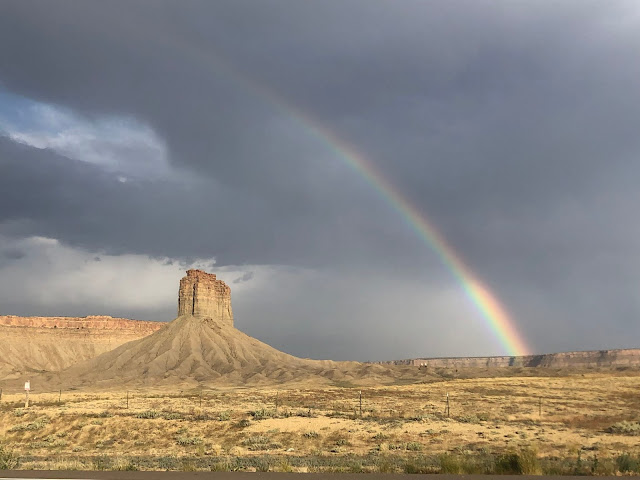 Eventually we'd reached Arizona, the goal was to make as much time as possible.  Our destination was Sedona but decided to make a few stops along the way.  Since it wasn't possible to reach the destination this night we decided to hit Lee's Ferry along the way.  Since this wasn't originally on the agenda, I was ill prepared on how to fish it.  I began texting all my friends for information.  Lee's Ferry hasn't been on mind for over 15 years, I've long since forgotten what was necessary to fish it.  I got some info from various sources and figured we'd hit the fly shop before starting. 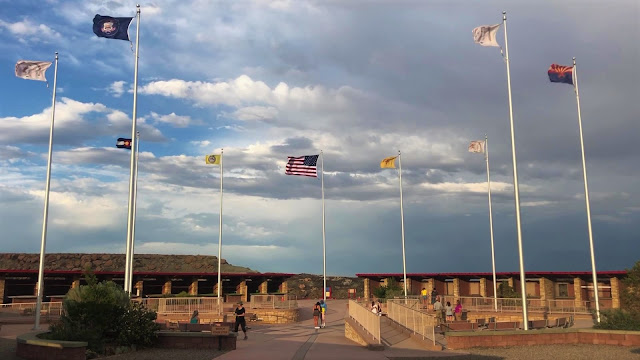 Since it was along the way we stopped at Four Corners to check it out.  This is intersection of Colorado, Arizona, Utah and New Mexico on Indian land.  If I recall it was $5 or $6 per person to enter.  After some pictures we were in truck ready to go.  As we drove off from the monument and since we won't reach Lee's Ferry this night anyhow Kelly asked if I'd ever seen Monument's Valley National Park.  I responded no.  He asked if I wanted to see it and I answered in the affirmative.  That would be the destination for the night and we'd find a place to camp once we got there. 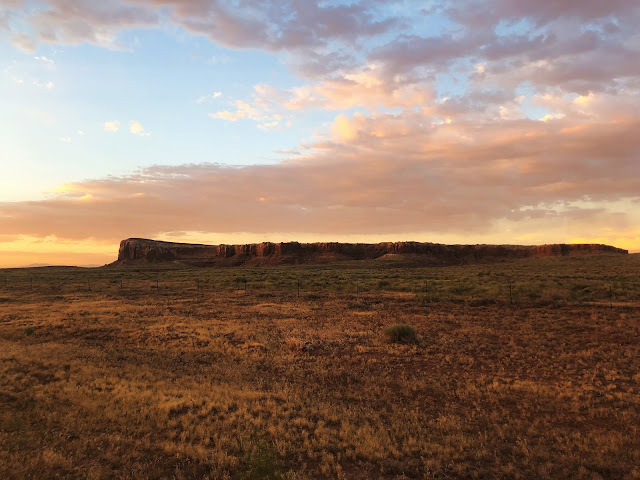 Posted by gourmetsportsman at 11:17 AM