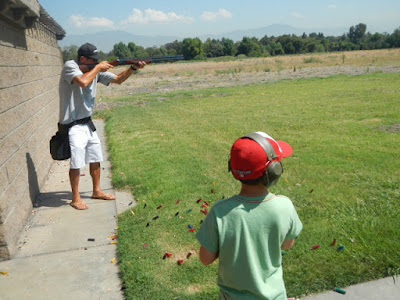 With the early bird season weeks away, its time to start preparing.  This week has been brutal and it was time to blow off some steam.  There's no better way than firing off a few rounds.  I shot like shit, not surprisingly since I haven't picked up a shotgun since last season.  Skeet was the game of choice today.  Ed and I limited ourselves to just three rounds as this heat wave is a killer.  I shot my Merkel 147SL 12 gauge for the the first two rounds and my Merkel 47e 20 gauge for the last.  Since I'm preparing for the bird season I shot game loads and I began feeling it by the middle of the second round.  Poor mounting didn't help either.  I need to head back.  I can't be shooting this poorly in the field.  Noticing that I was shooting high on several birds, we diagnosed that I was ever so slightly pulling my head away from the stock just before firing.  At least I have a few weeks to fix my problem before its gametime.

The next time you're buying rounds at Triple B's, look above at the ceiling just before the cash register.  You'll notice that some idiot, years ago, came into the clubhouse with a loaded gun and had a negligent discharge.  It was my buddy Mike who informed me of this years ago.  Imagine you're standing in line paying for rounds and some asshole behind you shoots off his shotgun. What an asshole, I hope they barred that dipshit for life.  At least the moron had good enough sense to have his barrels pointing upwards. 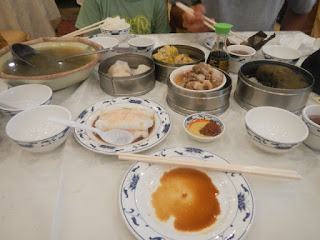 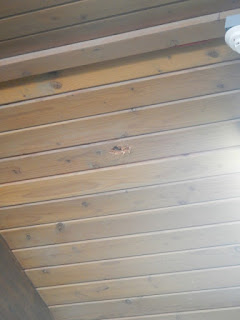 Afterwards as is a usual custom when shooting clays here, we headed to a nearby restaurant for dim sum.  All in all it was a good day despite the unbearable heat and the fact I shot miserably.

Posted by gourmetsportsman at 5:29 PM

Email ThisBlogThis!Share to TwitterShare to FacebookShare to Pinterest
Labels: early season, fine shotgun, Food, Gear, Merkel, side by side, wingshooting