Not So Local Local Creek 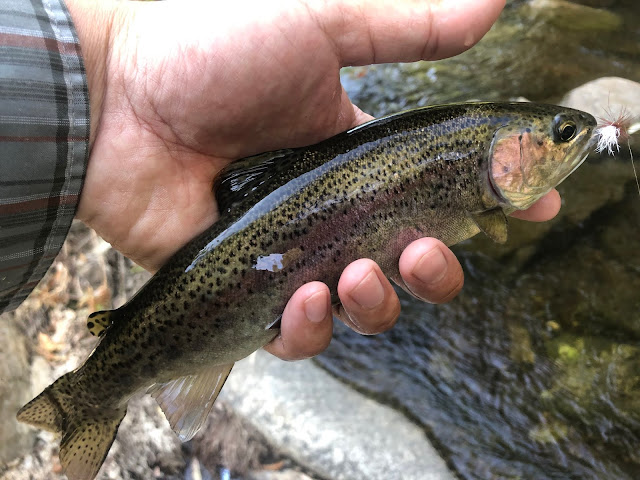 While on route to Bakersfield I decided to stop by a not so local "local" creek to check it out.  I've only fished it once and the last time I was here my buddy Kyung and I were kicked off the water by the Forest Service as there was a brush fire three ridges over coming our way.  That was back in 2006.  We were ill-prepared to fish here, equipped with heavier than necessary long rods for the eastside.  That's because we fished here only after calling our Eastside trip short because of poor fishing.  While on our way back home we spontaneously decided to check this place out on the drive home.  Missing the only fish I only managed to get to rise we were kicked off the water not long thereafter.  While walking to the parking lot we were stopped in our tracks when a ranger forbid us to go down the road as a helicopter was landing on out path.  It stayed there stationary for 30 minutes, routers running before we asked if we could simply go down the bank and hike around the chopper.  He agreed and let us go on our way as long as we stayed away from the blades.  Once we got in our vehicles we battled traffic to get off the mountain into safety. 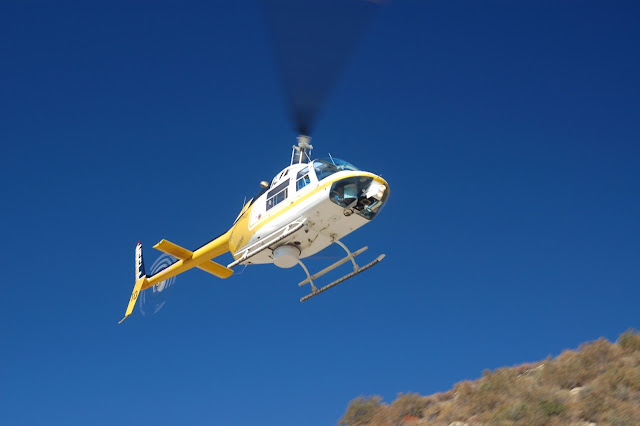 Now thirteen years later I returned to check it out.  I was the only car parked in the parking lot.  Not always a good sign.  After rigging up I hiked down to check out the water and noticed the distinct smell of  "green skunk" in the air.  Three young men and one gal popped out of the brush and onto the trail stoned out of there mind.  I continued hiking up after looking at the dismal water.  Small, stagnant and stale.  No sign of life.  This was disappointing.  I continued upstream and the water started to move and look promising.  Problem was accessing fishable water.  Either it was too choked with brush or the banks were too steep and unstable to get down. 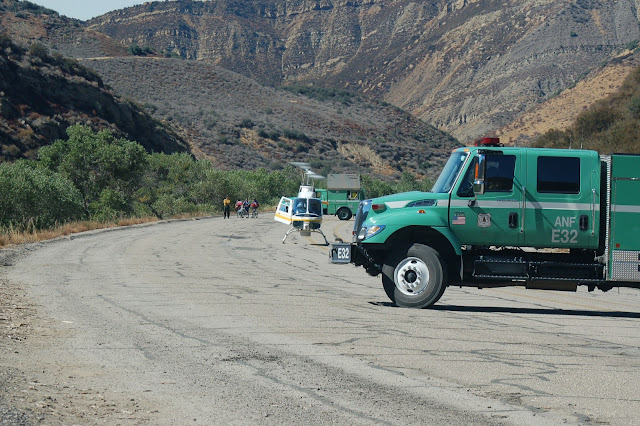 I did eventually find some fishable water and managed to get a fish in the 11-12 inch range to rise on my dry.  He dove into a boulder and spooked a handful of fish out of there before I wrangled him out and landed him.  I tried to get my phone out of my pocket for a pic before he bucked himself loose.  While landing him I noticed the spooked fish were all unphased by my presence.  I looked closer and I noticed they were largemouth bass and a handful of bluegill.  One bass looked at least in the two pound range.  Armed only with a handful of dries and a one weight I tried futilely to get him to bite but to no avail.

I moved up and managed a few more fish but called it a day after struggling to get any further upstream.  It was just too much effort to go through the jungle.  I climbed out of there up the bank and that was an effort as well.  I decided to call it quits after that.

Hiking back to the truck I heard another promising piece of  water through the dense foilage and decided to make the effort to get down to investigate.   When I did I manged another nice local specimen and a handful of dinks thrown in.  Now I decided to call it quits and go back to the truck.  Of the few hours I spent at this place I spent 98% of the time either hiking or looking for a way to the water and only 2% actually fishing.  Not sure I'll be returning anytime soon.  If I do I'll be targeting that bass.  I wasted enough time to start my journey north to meet my buddy in Bakersfield later that night.
Posted by gourmetsportsman at 9:09 AM