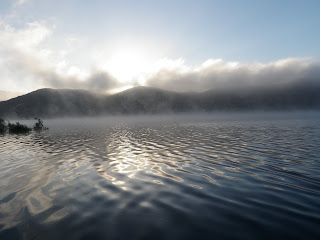 Mike and I fished Barrett Lake on Wednesday the 16th for the first time. It was 1976 the last time Mike fished for largemouthes, for me, not that long but its been a few years. I have longed to fish this lake since reading an article about it in 2001. From then on I had heard fish stories from fellow fly anglers of 100 fish days. This has always peaked my interest but unfortunately I was never able to land any tickets. Barrett is different than most lakes in SoCal. It's not a year around fishery and it limits fishing to Wednesdays and weekends. Also only 100 anglers are permitted per angling day. To top it off entrance to the lake is done by purchasing tickets from Ticketmaster. Tickets are hot commodity and sell out rather quickly. I was never able until now to get any of this tickets.
We arrived at Barrett at 5am, the first available time to be escorted into the Lake. The first thing we noticed was how cold it was. Luckily I brought my fleece, I had considered leaving it at home. Mike had not brought a jacket either and lucky for him I had a spare in my Rover. While parking Mike notice several anglers walking to the marina with a trolling motor. He had mentioned that he had one and should have brought it. I had forgotten to ask him if he had one prior to this trip, although I meant to do so. Live and learn. It would have definitely helped. 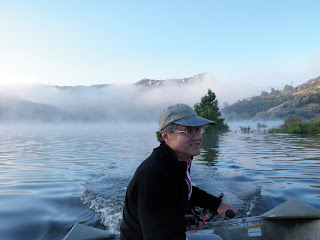 I started fishing with Bryan Webb's unnamed popper fly. This fly in my opinion is the greatest top water fly around. Unfortunately we fished for several hours without so much as a bite.

After 2 or 3 hours I switched rods to a 150 grain 5 weight. I started with a some woolly buggers but since the drift was fast I think the fly was moving too fast to imitate a leech. After sometime I switched to a rattle shad fly I tied years ago. This fly literally has a thousand casts on it and has never produced anything, not even a bump. I thought the fly was useless. After a few cast I got 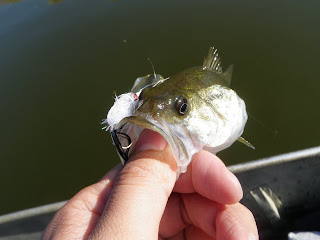 hit for the first time. I missed. Kept retrieving and finally hooked up. It was a dink largemouth but it got the skunk off the boat. I continued with this fly, catching several more, until I lost the fly in some submerged cover. I only had one of that fly but I had another version so I fished that. I caught several more on that fly.

I was catching some many that I decided to use other flies that have been in my bass box for years and have hundreds of hours without a hit. The bass bunny was next and that fly was catching bass. After losing it I switched to the bristleback, more fish. After knowing that these flies would catch fish I moved on to an old faithful-the classic deceiver. The old classic didn't disappoint. Caught several with it. 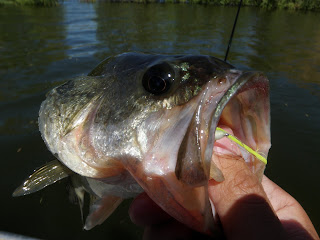 All the bass were not big, in fact most were very similar. Pretty cookie cutter. They averaged a pound give or take half pound or so. The largest was probably 1.75 pounds. Nothing special. Today it was about numbers not lunkers. Not bad for a first time trip. I later learned that this area, the Hauser arm, is not really known for the big bass but for its ease of catching large numbers. That is not to say they aren't big ones there. But most in the know hit Hauser when their normal big bass spots are not producing or when they are just looking for action. 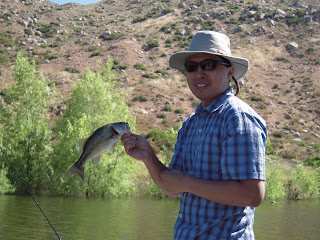 These largemouthes are northern strain, not the Florida strain that dominate the other SoCal lakes. I have caught several Florida strain in my lifetime but I must say pound for pound the northern stain fight alot harder. One fish even burned my finger while setting the hook. I didn't even get cut when I landed a 150lbs tarpon years ago.

This fishery is quite amazing. I will be back. I've been pestering another friend, Ed who knows this lake quite well, to hurry up and pick a date so he can give me the lowdown on this place.
I fished with T&T helix 5wt saltwater rod with a floating line, Scott S3S 7 wt with floating line, and a Sage XP 5wt with 150 grain line. Next time I'll just bring the two 5 weights and maybe a 3 wt for panfish. 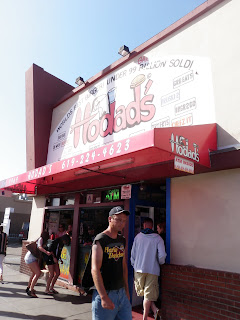 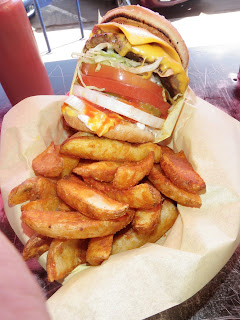 After fishing Mike treated me to dinner at Hodad's. This burger joint is said to be one of the top five burgers in the nation. Mike and I had never tried it and since it was not too much out of the way, we decided to give it a try. Their claim to fame is there bacon cheeseburger. It was good but top 5 in the nation? I'm not quite sure about that.
Posted by gourmetsportsman at 9:14 PM