Had a Bit of a Scare 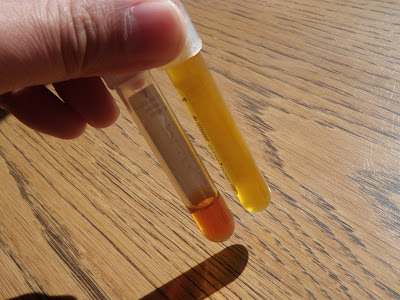 Two samples of Kaiser's urine, the bloody urine and one from the following day which appears to have cleared up.

After hunting all day we heading back home for a long drive. Kaiser worked hard the past day and a half. When we finally arrived home I took Kaiser out to urinate. While relieving himself I noticed that his urine had blood in it. I couldn't really tell as it was around 9pm by now and the artificial lights outside made it tough to really see. So I let him in and found a flashlight to check. He had pissed on an empty planter that had some light dried leaves in it. I saw that his pee did in fact have blood.

Having never dealt with anything like this, I freaked out a bit. After I showered him I called the local emergency vet to see if I should have him checked out now or if I should just wait till the morning to see my regular doctor. they told me to come in. So I did.

The vet checked him over. There are a few causes of bloody urine such as eating poison, trying to pass a stone, among others and the vet asked me question so to see if these could be the cause. Another cause is overexertion. When a dog overexerts himself his muscles breakdown and is passed through the body through urine or feces. The doc x-rayed the dog to see if he was trying to pass anything, she also did other tests such as blood and urine analysis.

After some exhausting tests, the main culprit was overexertion. With the results in from the analysis in, it was determined that Kaiser had some abnormal readings that concerned her. She worried that he could suffer from some kidney damage and suggested that he say overnight so she could put an IV in him so he could recover quicker and reduce any chance of kidney damage.
I left him there for the night to pick him up the next morning before 8am.

I arrived at 7:30am to pick up Kaiser and after paying the $710 bill we were off. The vet said he should be fine but have him rechecked in three days to make sure he didn't suffer any damage.

I'm having several hunts that are becoming extremely expensive but as long as my dog is okay, I'll just have to live with it.
Posted by gourmetsportsman at 8:15 PM