April 2, 2018
Last year I wanted to fish for Taiwan mahseer with my friend Donny but the planned trip was canceled due to rain.  Instead I fished within the city of Taipei and ended up getting skunked after failing to connect with two tarpon that took my fly.  This year I returned to attempt to land my mahseer.
I contacted Donny months earlier on the possibility of taking me out this trip.  He agreed and when I arrived he asked if I wanted to head out on Monday.  Naturally I let him know I was in and he said he'd pick me up at 4am in front of my building.  I awoke that morning at 2am still trying to adjust to the new time and could not fall back asleep.  So by 3:30 I prepared myself for outing.  I brought a few rods on this trip a borrowed Sage Smallmouth rod, and two Orvis Superfine Carbon rods, an eight foot 4 weight and a six foot 2 weight.  I was really rigged up for the Japan portion of this trip.  The reason for these rods were they all fit in my luggage and so I left all my nine foot rods at home which meant some of these rods would compromises and not be ideal for certain conditions or species.
Donny arrived on time and we headed to Hsinchu with his friend Lin You Hong.  Having arrived earlier than expected with waited for the sun to start rising before setting up.  After putting our waders on and rigging our rods we headed to the water.  You Hong would move upstream solo while Donny and I would go downstream.  Donny told me at first light it was best for dry flies and I had tied a black foam beetle/cicada fly I created.  Prior to this trip I was trying to gather information on tackle and flies.  I asked all that would answer.  The information I got was always vague.   Responses were always something like "use foam fly" or "sink line" or something similar.  I didn't want to come off pushy but what foam fly?  What size?  What color? What bug should I be imitating? Etc.  I wondered if these guys I was asking were simply holding back or was it simply a language barrier.  I made some educated guess while watching as many youtube videos on the subject and went from there.
Donny taught me his techniques for fishing these mahseer.  They were contrary to what how I fish and so it was eye opening.  We started by standing on the bank and casting perpendicular to the current.  He told me to cast to the other side of the bank and behind big boulders.  Like trout these fish hide behind boulders or stones by unlike trout they are never found in front of them.  Once the fly the water I would hopelessly try and throw an mend upstream with my soft 8 foot rod to counteract the current.  This proved fruitless and unnecessary.  These fish hit the moment or just after the moment the fly hits the water so the drag that occurs from the current is nullified.  Mending is therefore a waste of energy.  You can strip slowly too in attempts to get them to rise.  It seemed like Donny was getting his fish this way.  I was getting a lot of reactions but given the low-light and small fly I could never really see the fish take the fly only the splash.  I never did feel any fish when I tried to set the hook.  I later learned on another outing that these fish will often false strike a fly and merely bump it.  Perhaps that was going on or I was just too slow to react.  Donny thought I might be reacting too quickly and told me to wait briefly on the hook set.  I already missed half a dozen takes so I was willing to try anything.
We moved downstream to a huge deep pool that must been at least 8 feet deep.  Donny told me to stay low and cast downstream.  These mahseer are extremely spooky and once spooked they don't eat.  "Just like yamame" Donny told me.  But unlike yamame these fish don't go into hiding they simply shut their mouths and tease you with their presence.  I stayed low and casted to several rising fish.  None of which I was able to connect.  One of them was "BIG" according to Donny.  I broke off and Donny checked my set up.  I was fishing a 3x leader a size 11 fly.  Donny rerigged me with his set up of a stouter leader (I don't recall the tippet strength but it was significantly stronger) and a bigger fly that looked to be size 6.   I fished this for a while without any hook ups until the sun was up and Donny suggested we go subsurface. 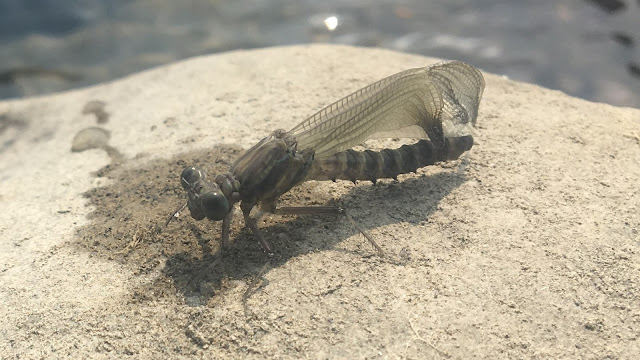 I rerigged with an indicator set up and started casting into seam throwing hopelessly trying to throw mends on an 8ft soft rod until Donny told me to take stuff off.  He told me to go simply with a weighted nymph quit dead drifting the fly but rather cast downstream and strip it back up.  I still wasn't getting into any fish so I switched to a "secret" nymph my buddy Jacob gave me and swore me to secrecy not to reveal to anyone.   By this time it was time to head back upstream and refish the holes on the way back to the car.  It was then casting upstream I managed my first fish.  While not the mahseer I was looking for, it was a fish, acrossocheilus paradoxus, I was told later, very difficult to catch on the fly as they are algae eaters.  Also it was very good sized one as well.  Later I did catch my first mahseer, the better of the two I caught but failed to get a photo of as it flopped out of my hands when Donny came to photograph me.  I 'd get another before the end of the outing but a much smaller version.  I did get a photo of that one.  We managed to head back to the car and after thinking I lost my GoPro cam we went back to the water to look for it only to discover later that it fell into my waders.  At lunch we discussed our catches exchanging photos and stories and both Donny and You Hong said how disappointing the fishing was as the fish were all small today.  I didn't care, I managed one of my objectives on this trip.

Next up:  Yamame, Maruta, and Suzuki fishing in Japan.
Posted by gourmetsportsman at 7:07 PM