Last Day of the Trip 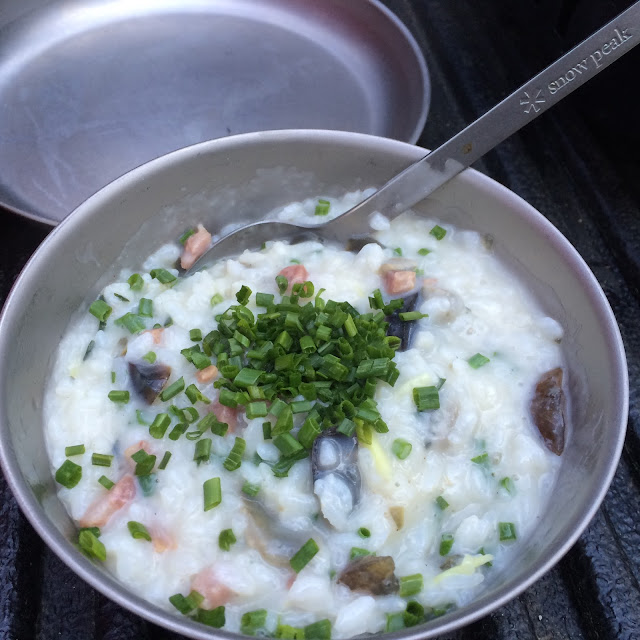 Having gotten more than enough fish the previous days, the last day for the most part was a travel day.  I did wet my line early in the morning near camp just to see if I could get on to rise.  No luck as it was still to cold.  After breakfast and some packing up we made our way out but not before checking out the meadow area.  The conditions were sorry and water low and all I saw were fingerlings.  I did see two fish rise that I casted to but considering I was fishing a size 12 and 5x tippet it was futile.  The water here was barely moving and a long 7 or 8x may have been more appropriate.  My gear still in the truck, having only grabbed my rod, I decided to call it quits.  I figured the fish were not big enough for me to bother rerigging.  Additionally we wanted to get out of there as soon as possible so we could avoid the Sunday traffic. 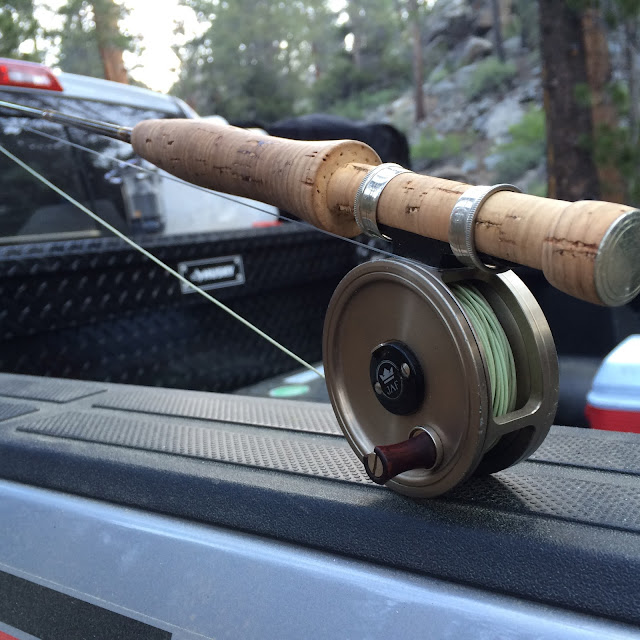 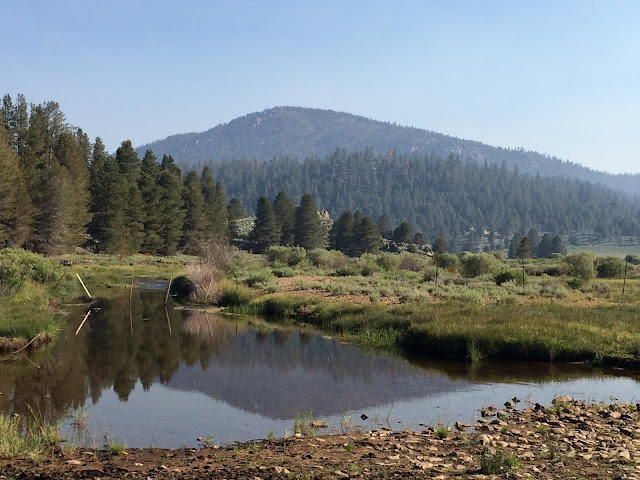 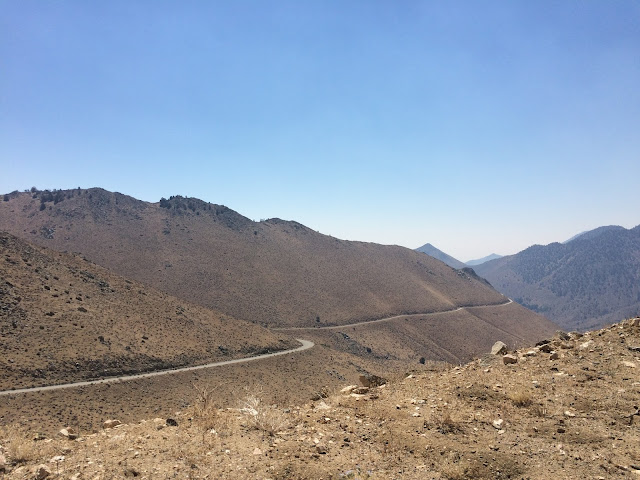 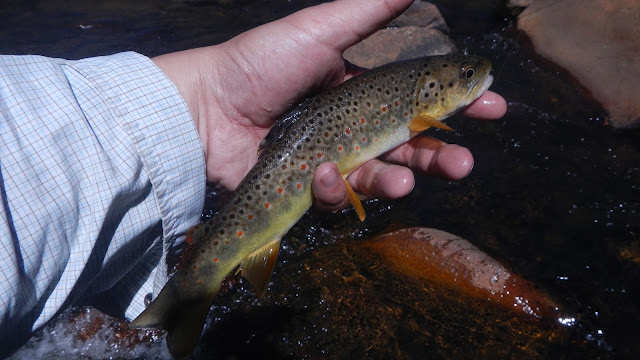 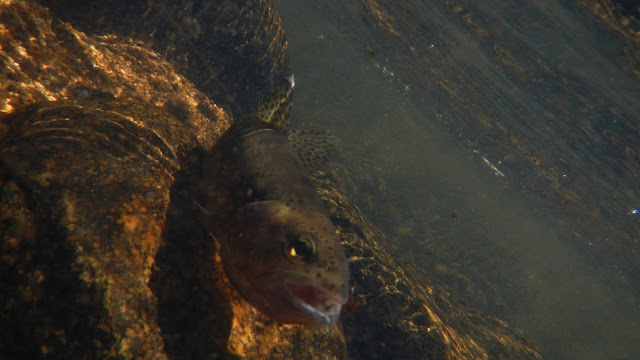 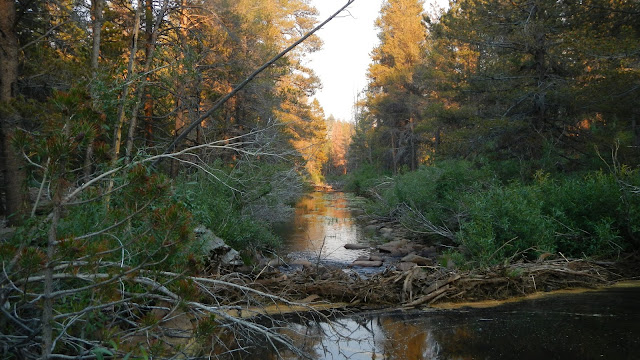 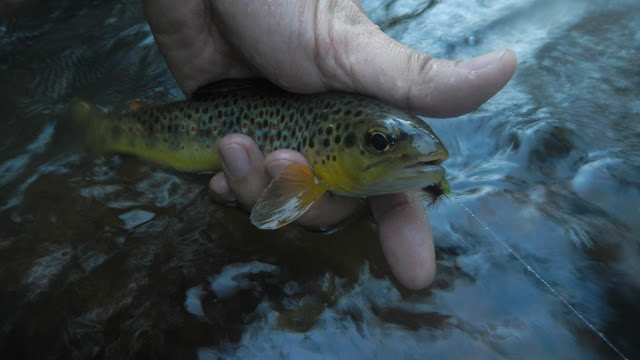 Posted by gourmetsportsman at 6:51 PM No comments: 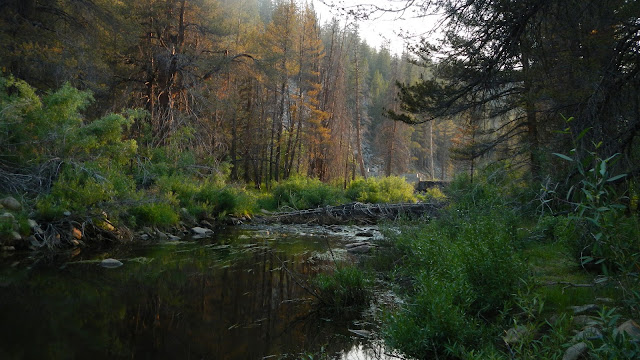 Over half the year has past and my fishing buddy had yet to catch a fish and not from a lack of trying.  This trip was intended to be a confidence boaster and a slump buster.  And it sure was with fish readily willing to take a dry.  I can't speak for him but I easily had 100 fish to hand.   Fish ranged from local mountain sized dinks to fish in the 12 inch range.  My Sage SLT one weight was the perfect rod for this trip and made each fish quite sporting.  Saturday was the water quite busy, more so than either of us had experienced on this water.  Also it was a lot hotter than expected which caused us to stop fishing and take a midday siesta until just before five.  By then all the fishermen had quit and returned for supper.  This gave us the run of the river.  I looked for my "glory hole" from the day before in the hopes that that foot long golden had returned.  My initial hike to it, I overshot and missed it.  When I realized I'd passed it, I decided to backtrack but not before casting into a run with some rising fish.  Here I managed my best brown of the trip around a 12 inches.  After a few here I headed downstream to find my trophy.  I found it and made my cast into it and had a solid 10 inch golden take.  While nice, it was not the fish I wanted.  No other would take after that ruckus.  So we moved upstream heading to an area of slower water where huge fish could be seen in the submerged grass.  It was all but impossible to make any good drift to these fish and so we continued.  At the beaver dam I stopped to cast to rising fish.  From here we had no shortage of willing fish and we only added to our fish count.  Exhausted we headed back before dark to prepare dinner. 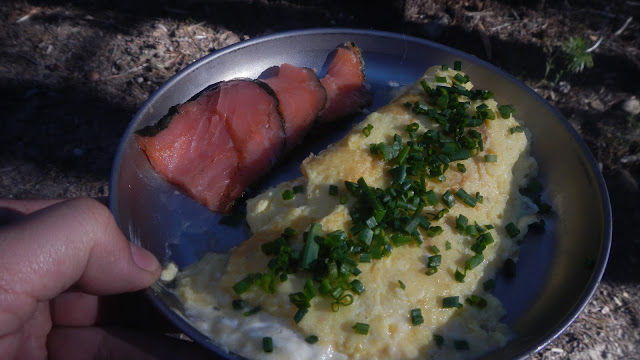 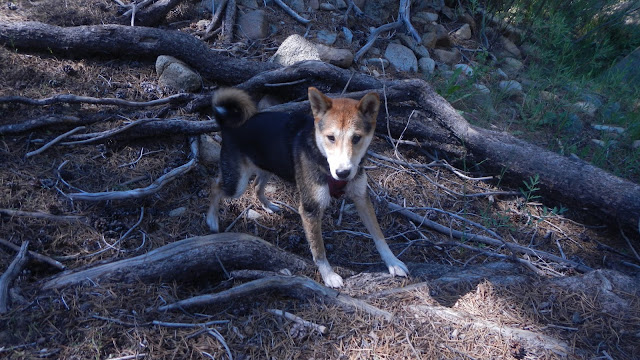 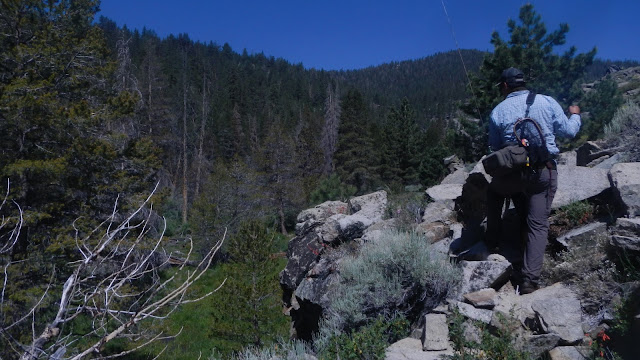 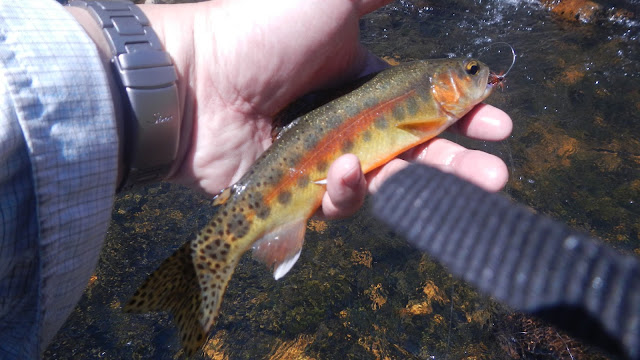 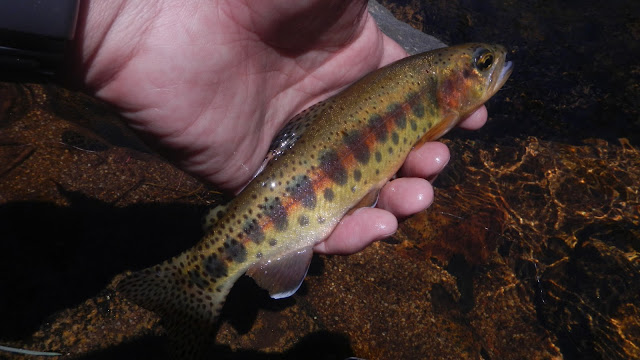 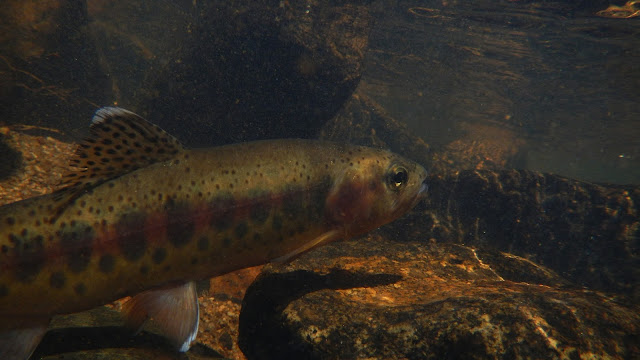 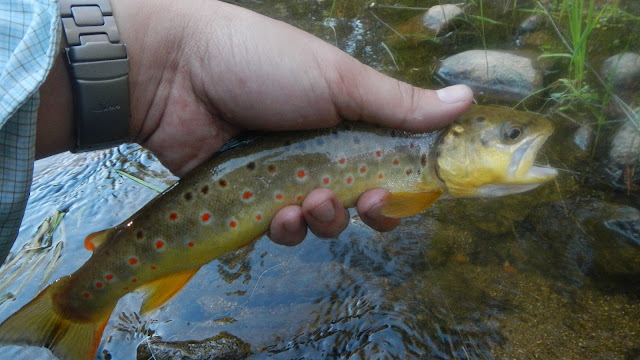 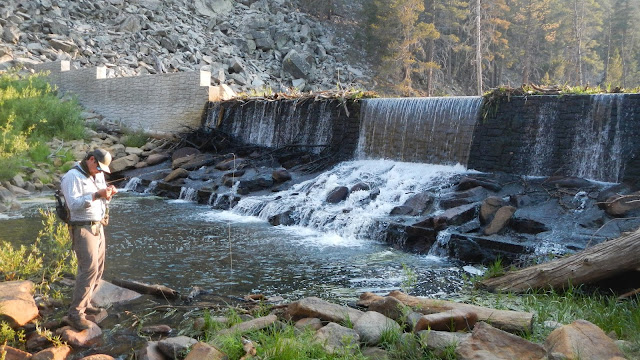 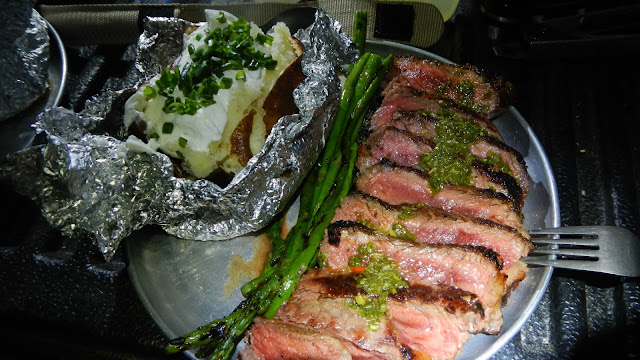 Posted by gourmetsportsman at 8:54 AM No comments: 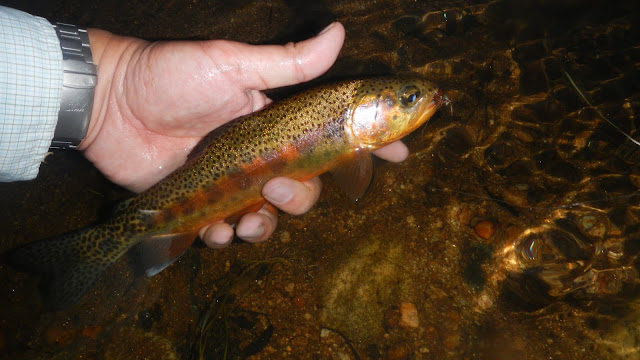 Ever since the Sherminator introduced me to golden trout well over a decade ago, I've shared his quest to land one at least 12 inches in moving water.  The foot long marker is an easy feat in our high country lakes but pretty tough in our rivers and creeks.  The closest he ever came was 10 inches.  I managed to reach the foot long goal only to have the fish escape my grasps while I waited for the camera to focus on the fish.  The above picture was a conciliatory fish of about 10 inches I caught moments after losing my trophy golden. 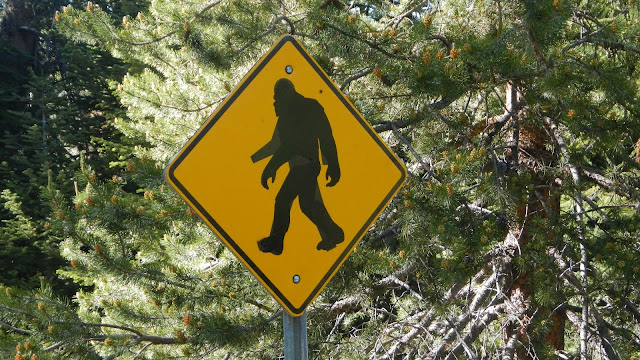 We started our trip Friday late morning hoping to beat the weekend traffic.  Of course with Southern California that's hit or miss.  This time it was a miss and getting out of the IE was slow.  We managed lunch in Adelanto but we needed to eat outside in the 100 degree weather because Chul had brought his pup and we couldn't leave her in the truck.  After deciding on Rubio's we waited for our food in the patio area, one without any shade.  Being in the high desert high winds picked up it blow my cup of water and salsa cups right in my lap.  As if I wasn't already annoyed with the traffic as well as agitatied from seating in the heat without shade, now I had a lap full of salsa verde and I look like I just pissed my pants. This is one hell of a start. 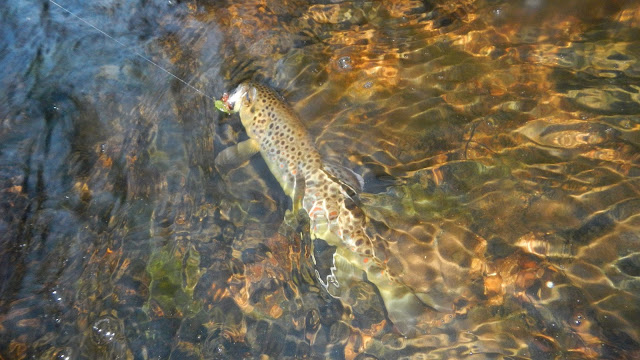 After rushing through my lunch, as all I wanted to do was get out of the desert heat and get into the air conditioned truck, we made our way north.  After elevated somewhere around 10,000 feet, we made camp.  The only campsite left on the river.  By this time it was sometime just before 7pm giving us about an hour and a half of light.  It did not take long before my one weight was being bent.  I managed several dink goldens and a handful of respectable browns. 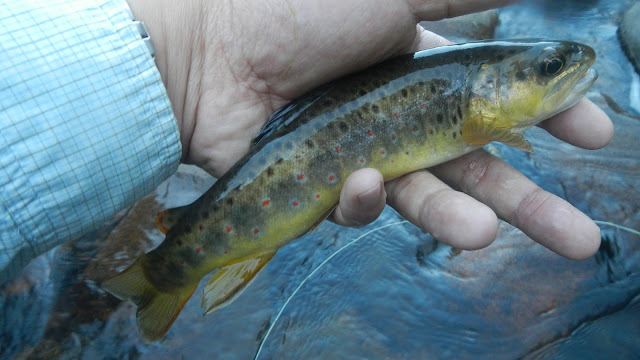 I reached a small pocket that required me to make a curve cast so not to hit the fallen log behind it or the overhanging branch in front of it.  I made the perfect cast and was rewarded with a strike.  With the rod bent to the cork it felt heavy and I had to gingerly coax it away from tangling itself in the overhanging branch I just avoided.  Once landed, it was my trophy golden after all, I held it waiting for the camera to focus before I clicked the shutter.  In that time he gave me a squirm and was away before I could document it for the Sherminator.    I can hear it now "Pics or it didn't  happen."  Damn, what next salsa in my pants?  Oh wait...To Be Continued.
Posted by gourmetsportsman at 9:59 AM No comments: