Land of the Rising Sun (and Fish) Part Two: Amago and Iwana 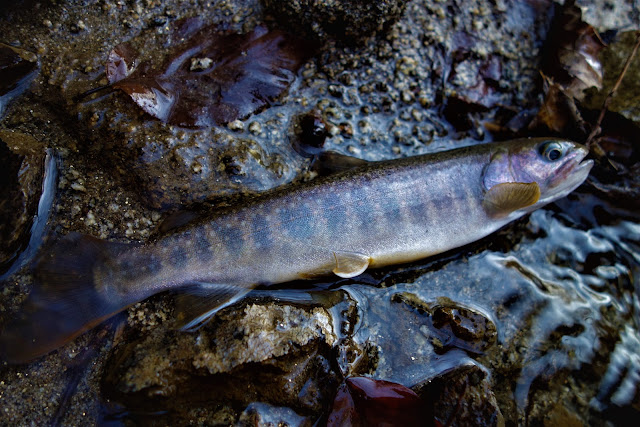 I've been visiting Japan for more than 25 years now, in that time I've made over half a dozen trips throughout  Nippon but never once did I ever get to fish this country.  This is mostly due to the fact I do not speak nor read the language which is a much needed when dealing with fish licensing.  Remember you'll most likely be in rural Japan so finding English speakers will be more problematic than while in Tokyo or any other major Japanese city.  Unlike here in the states there is no statewide (prefecture in this case) fishing licenses in Japan and each fishery is controlled local fishing authority or a "Gyokyo."  Fishing passes issued by the local authority are purchased at a tackle shops or convenience stores who can give you guidance on areas to fish, bag limits.    These tickets can be purchased as day or season passes.   Costs are around 800 Yen (less than $8 USD given current rates) for day and 4000 Yen for season passes.
It's Golden Week which means a week-long holiday for most in Japan.  This is the time for family vacations and quite possibly the worst possible time to go out to the mountains.  Traffic is a mess and the trout streams will be filled.  When I originally emailed my buddy Koji he expressed to me not to come during this week or the week after but I had no choice.  Koji was gracious enough to take me out despite the huge inconvenience.  Planning on crowds at every major river, he had us concentrate on lesser-fished (term used extremely loosely) tributaries. 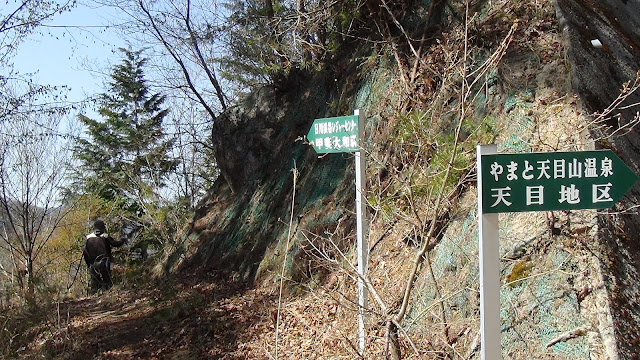 Koji picked me pick early at my family's residence to drive 150km to Yamanachi prefecture in search of the my first Japanese trout.  Under normal circumstances this is a hour long drive but given the holiday we planned for a three hour trip. The drive wasn't as bad as we expected and I had some nice glimpses of Mount Fuji and rural Japan along the way.  We arrived bought our fishing pass at the local 7 Eleven and drove up a windy mountain road to our destination.  Thankfully no one was parked at the end of the road.  We were the first to arrive which if you plan on catching fish is a requirement for these fish. 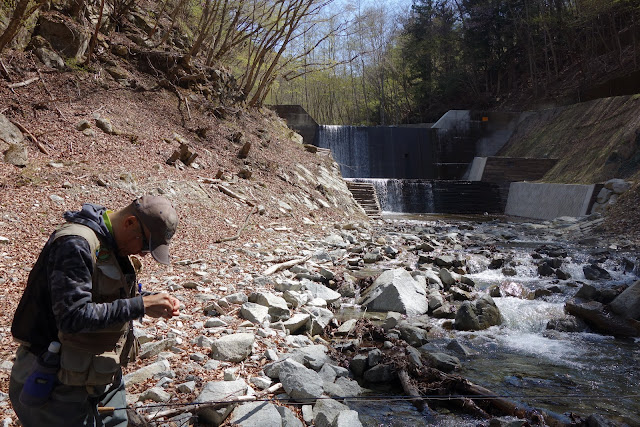 I have nothing but respect for Tokyo anglers.  First Tokyo the most populated city in Japan.  Since Yamanashi prefecture is closest fishing area to these Tokyoites it's highly pressured.  Think what the sierra is to LA residents.  The only difference?  These fish once spooked or caught, they don't eat.  There is no "let's wait it out for the pool to reset."  Once you screwed up, that's it move along.  So if you have an angler ahead of you, you might as well not fish that section or river for that matter.  I've heard this before but I never really believed it.  Once I experienced it I came to realization that it's not an exaggeration.  So generally you have one shot at a pool you better make it count.  Sometimes if the fishing gods are forgiving maybe you'll get a a few other chances at least in the bigger pools but for the most part make each cast count.  If that wasn't tough enough add to the fact all waters are shared with all types of anglers.  There is no catch and release fly fishing only sections (for the most part).  There is no limit of catches.  A bait angler can come in and take all the fish he wants.  Koji told me if a good bait angler comes in and fishes out a stream, it takes at least two or three years for it to rebound.  Let me not forget to mention the fact, at least in the small tributaries I fished, there is always a branch, bush, twig or some other obstacle that interferes with either your cast or drift.  There are some open parts to cast normally but there ain't much.  Expect a lot of crouching, kneeling, crawling to these spooky fish.  The catching though is not hard.  The fishing is.  These fish seem to take any fly presented properly.  Its the getting it presented properly that is the difficult part.  Expect to spend some time trying to retrieve your flies from trees and such. 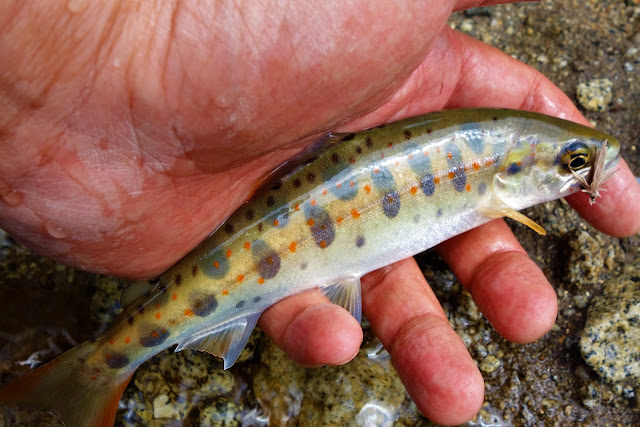 It took me four or five hours to finally land my first amago after losing half a dozen or more.  Koji could see my frustration and guided me more diligently after he landed several amago and iwanas.  He could tell I was struggling.  Having not fished these small types of streams in several years due to our extreme drought, I'm out of practice with this type of fishing.  Had I fished these water five or six years ago I'd be in perfect form as all I was doing was fishing our local mountains which bear similar fishing characteristics to these Japanese streams.  It seemed like my quest for trout was going to end up like my quest for suzuki with a bust.  I thought to myself had I really traveled 5500 miles and waited over twenty years just to get skunked?  Thankfully with the patient tutelage of my buddy Koji I got my fish and confidence restored.  Now with the amago mission completed it was time to for our next mission.  Iwana. 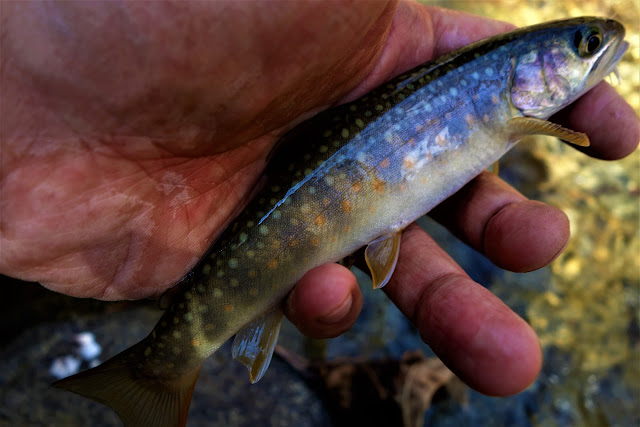 It was not long after my amago did I catch my first Japanese char, the iwana.  Iwanas are easier to catch, similar to our brook trout they are aggressive and easy to fool unlike their trout counterparts.  Koji told me catching 30-50 is not unheard of in any given day but for some reason this trip would not be so abundant.  We managed several of these feisty guys ranging from dink to less dinky 8 inches.  All in all though quite fun. 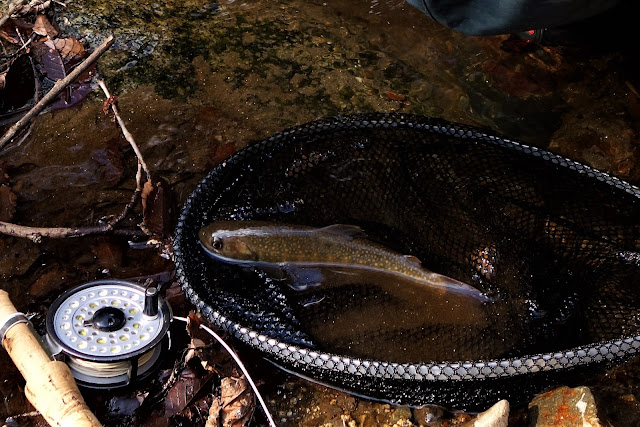 We moved to another river in the afternoon where now relaxed I was able to enjoy myself somewhat. Stress of trying to catch this little devils, not to mention my new Korker wading boots with rubber soles were worthless, jet lag and thin mountain air though were taking a toll and I was getting tired but I soldiered on.  I don't recall how many I caught this day as its all a blur now that I'm writing this post but it wasn't a significant amount.  Just enough to keep me happy.  After all this wasn't a trip for numbers necessarily but simply to experience and document with film my Japanese fly fishing escapade.
Posted by gourmetsportsman at 10:08 AM