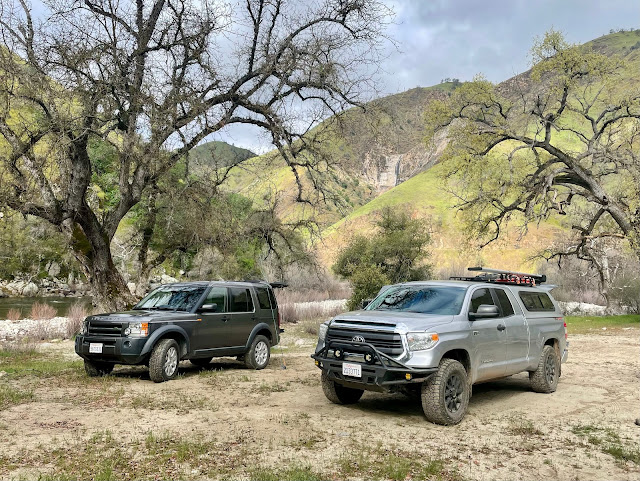 Rain was forecasted for the evening but clouds were coming in by the time we woke up.  I woke pretty early and waited for the boys to wake up keeping myself occupied by staring out of the tailgate of the rover onto the river.  In the morning we were seeing fish rise sporadically right in front of our campsite.  We didn't bother to cast to them as it wasn't a steady hatch.  After breakfast we headed out to the trail.  We bypassed the area we started the previous day and decided to hike deep.  We basically started where Chul missed all his fish the night before. 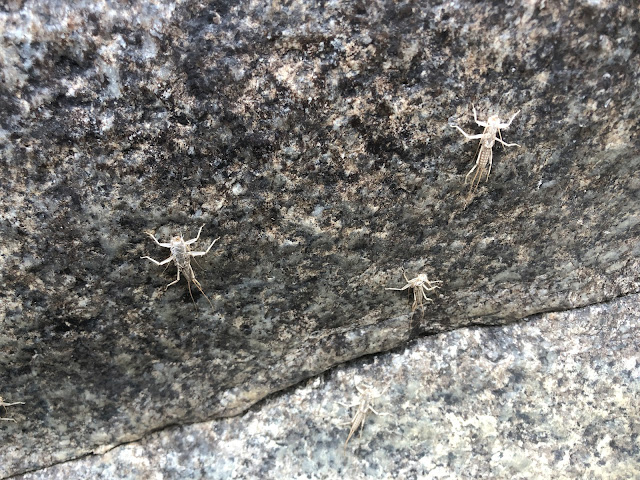 The day previous we saw very little sign of skwalas.  On this day we did see some old shucks on boulders but very little were noticed in flight or on the water.  We did see some March Browns but mostly we saw various sizes of BWOs both rather large to micro. 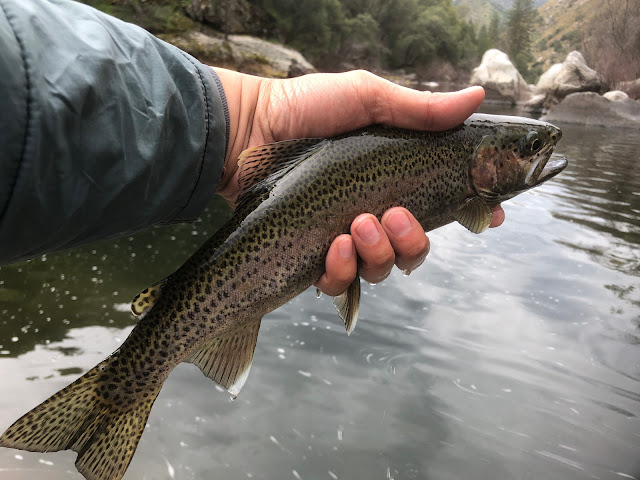 Given the cloudy conditions we figured there may be more dry fly activity than the day before so we left the nymph rods behind and only carried our dry fly sticks.  We arrived at the first location and began fishing.  Not much was happening and by this time it was close to noon so I stopped and had my lunch.  After lunch some fish were starting to come up on emergers.  Looked as though they were taking small flies so I decided to tie a dropper and keep my March Brown on the leader.  Not sure whether it was BWOs or midges I tied a fly that could represent either.  The fly was a size 20 Reaper midge.  It's sparkly enough to look like an emerger or an adult.  It wouldn't be long before my downstream drift was taken.  I managed to land it and then release it.  Chul took the next shot after he tied his fly. After he was done I tried again and had another rise with a fish coming from the depths but since elevated on a boulder I saw him the whole time and pulled the fly out of his mouth early. 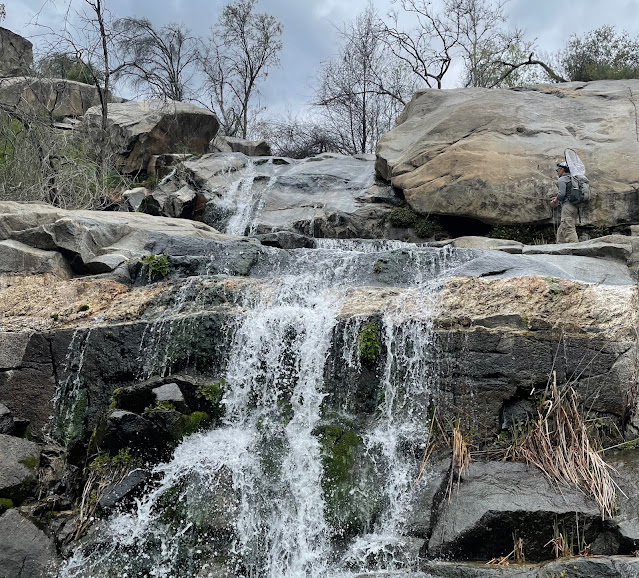 We decided to leave the area in search of more willing fish.  Hiked as far as we could before the trail would veer us away from the river.  We didn't fish at all as any entry point was choked full of poison oak preventing us from getting to the water.  Besides the water that we could see from above on the trail didn't look too promising for dry flies.  So we weren't too keen on looking for a path through.  So we decided to hike back to the area we caught fish earlier. 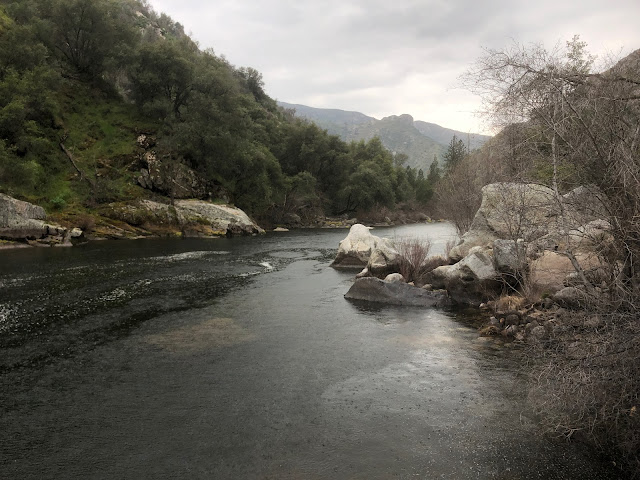 When we arrived to our spot clouds became more ominous despite forecasts of midnight rainfall.  We explored upstream somewhat but it produced nothing and access was limited by rapids and boulders.  So we headed back to the prime fishing lane.  I tried without any success.  After awhile the rain began to fall and it was time to take out the rain gear.  Despite wanting to stay for the evening hatch we decided it was best to head back to camp in case it got ugly. 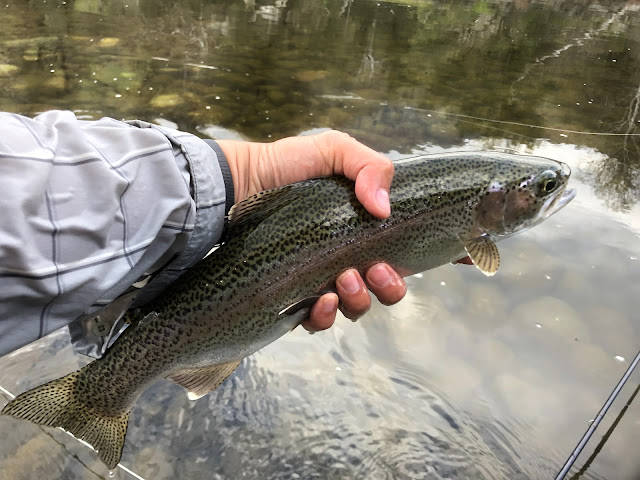 When we arrived at camp the rain let up some and fish began to rise on the opposite bank.  This area was a long stretch of flat but swift water.  I knew for the best drift I'd have to get to the other side and cast upstream to them.  While it wasn't deep it was deep enough to make things interesting.  As to not spook the fish I'd have to cross at the shallower but more rapid end of the run.  I put on my wading pants thinking it wasn't as deep to need full waders.  I was being somewhat lazy but also I wanted to wear my new pants.  In retrospect I should have just gotten wet and wet waded across or wore a full wader.  Why?  Because while crossing I lost my footing and took a spill getting me wet from chest down.  I did make it across and started noticing the rising pattern.  Still armed with both a march brown and reaper midge dropper I began casting.  In no time I was on  with the midge with a very nice fish in the 17-18 range.  I did net it with my new net.  So the fishpond did get it's first legitimate fish.   The fish were feeding on blue wing olive adults and I managed to get one in a vial for my collection.  This would be the only fish I'd be able to hook though as the feeding seemed to cease right after landing this one.  Now I had to cross back.  I would take another path though.  It seemed to be going smoothly until I reached a section that was just a hair deeper than my wading pants.  No other option but I had to step into it and get wet again. 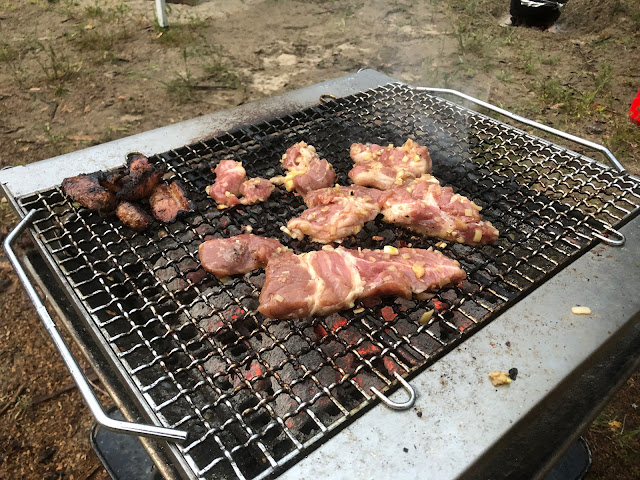 Once I crossed safely I changed into some dry clothes and started the coals for the grill.  Waiting for those to ignite I began to make the butter garlic rice that would accompany the Vietnamese grilled pork.  A constant downfall then began.  Cooking in the rain was a pain.  Luckily the rain while constant was light. 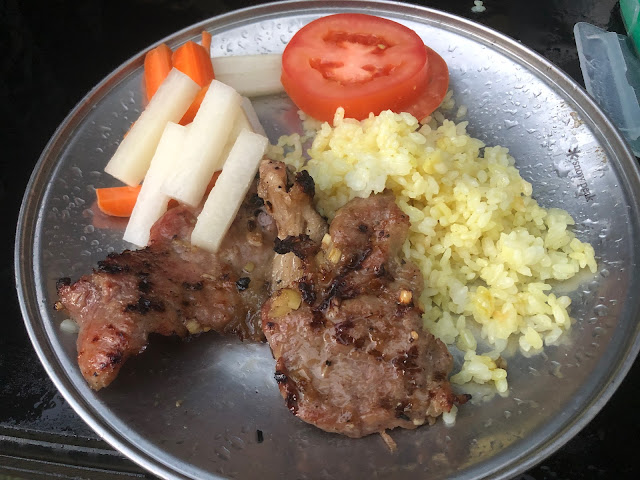 While I was prepping the my meal Chul and Tim were making dutch oven upside down pineapple cake.  Chul wanted to redeem himself from a few years ago where the cake ended up burnt and basically inedible.  This was caused by his girlfriend stoking the coals like a child and causing inconsistent hot spots in the oven.  Now that she is out of the picture we didn't need to worry about her screwing things up. 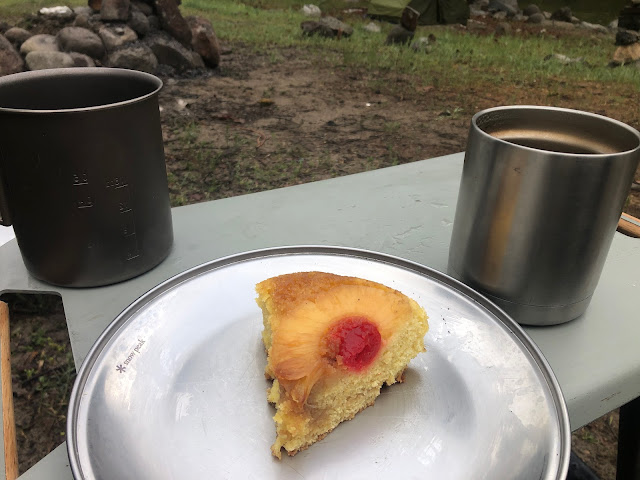 The cake came out nicely.  Pretty impressive considering controlling the heat is more art than science.  Chul was a bit concerned since he had forgotten parchment paper and I suggested using tin foil to cover the edges instead.  It seemed to work. The evening was spent near the fire.  We managed to collect enough dead California Oak to produce a blazing hot campfire.  I used the heat to help dry my wet clothes from my swimming incident earlier.  Campfires are quite nice especially when using nice hardwoods that burn long and hot unlike the garbage wood available on the eastern side of the sierra. 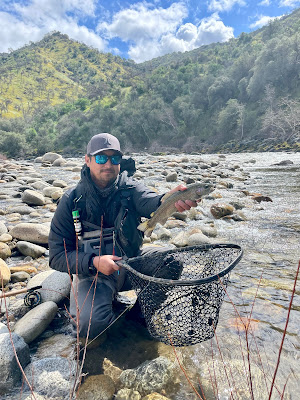 The following morning I woke up early as I usually do when camping.  Much earlier than the rest of the crew.  I opened the tailgate I simply sat up from my make shift bed in the rover and watched the morning develop.  I watched the river for any sign of feeding activity but it was still early.  Really early.  Eventually we packed up camp and fished a few roadside spots before heading out.  On one section I was fishing a prime nymphing lane.  Although I knew there was in a fish in there I gave up the hole and told Chul to fish it as he moved up toward me.  My mind was simply distracted on the Rover which was giving me suspension faults while driving the dirt road.  I knew exactly what was going on and it was either going to ignore the issue or the Rover was going to shit out on me and force me to limp back to a mechanic.  Chul took the run and began fishing it I on the other hand started picking up rocks looking for a March Brown nymph for my collection.  I have begun collecting collecting insects something I wish I did the last time I was here when the salmonflies were present or the time I fished the cicada hatch at the Green River. 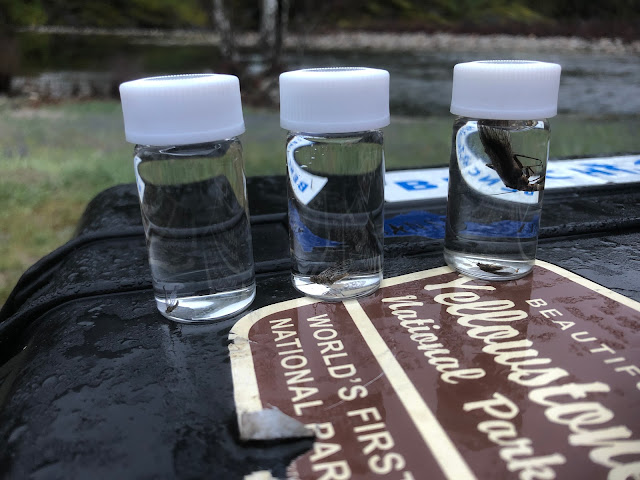 I never did collect my march brown nymph although I did get an adult dun.  In addition I managed adult skwala, blue wing olive and a black caddis.  All these were basically collected by chance.  The skwala landed on my foot while I getting ready to hike back to the trip when it began raining the day before.  The BWO landed on my finger just after catching the 18 incher.  As for the march brown that guy was in my hat in the morning when I woke up.  I had nearly caught one on the river the day before as one landed on the netting of my Fishpond and when I was reaching for a collection vial the wind blew it away. 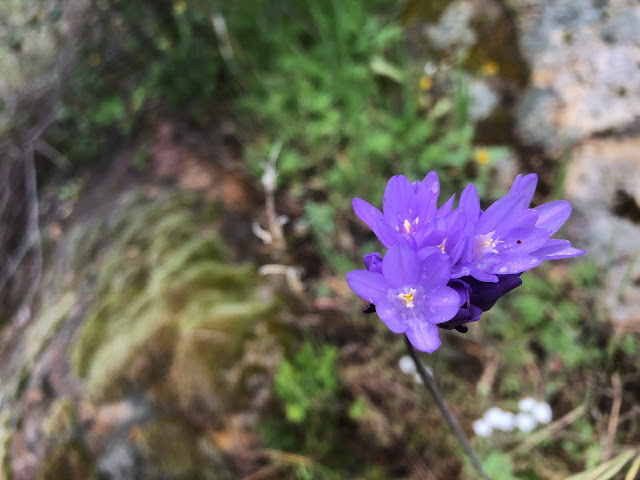 On the drive out we'd have one last chance at seeing the wildflowers.  While not a super bloom as we've seen in the past it definitely was worth seeing it.  It wasn't nearly at its peak either.  Perhaps in the next couple weeks it'll be at its prime. 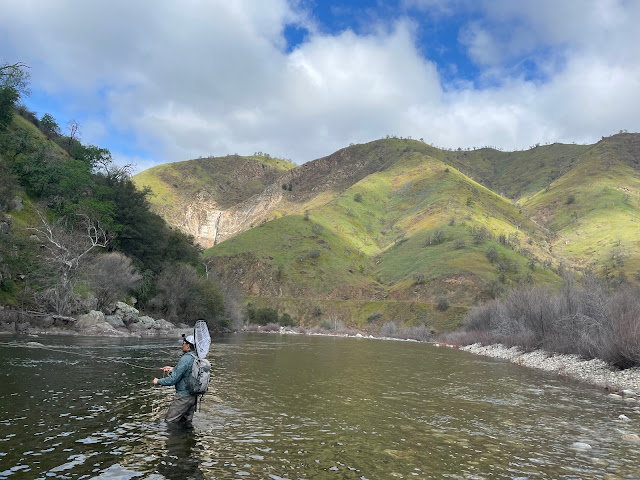 The last time we came here we stopped by a taco stand on the way home and we wanted to eat it for lunch again.  It took some time to find it but we finally did only to discover we got there just as they were closing.  Disappointed we headed down the street to a burger stand for some slightly above average burgers. 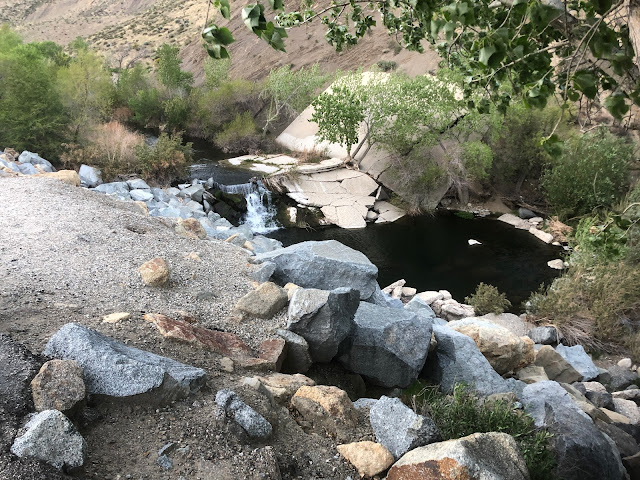 After lunch we went our separate ways.  Wanting to avoid any LA traffic I decided to stop and fish an LA mountain spot.  But once I arrived I only had less than an hour of light.  Besides that it was howling.  Wind so hard it forces you to lean into it just to keep from tipping over.  So I left the fly rod behind and started scouting it.  Three years ago I fished this area and did well enough for me to consider a return on certain circumstances.  At that time I saw a rather large bass surrounded by multiple bluegill.  Since I was targeting creek trout I wasn't armed appropriately to fish for them  but of course didn't stop me from trying though.  Never got those fish but did catch several decent trout.  I swore to return.  I didn't get far enough this day to see if that bass survived.  I debated on spending the night here to fish it in the morning but decided against it.  While the fishing wasn't lights out on this trip I didn't want to taint it with a possible crummy end.  So I headed home bypassing most of the weekend traffic.
Posted by gourmetsportsman at 7:10 PM