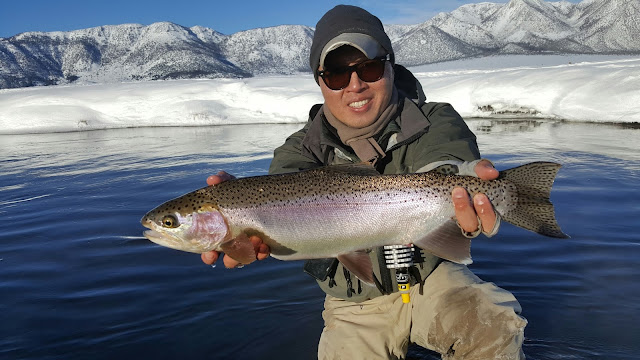 Had my alarm set for 1:40am to make sure I made it to Chul's house by 2:30am.  Arriving on time we made our way up north to the eastside in another attempt at snowbows.  After a disappointing breakfast in Bishop,  we drove up to meet our guide at 9:30 on the water.  Having arrived before us we received a text from him stating it was -20 degrees at the entrance. 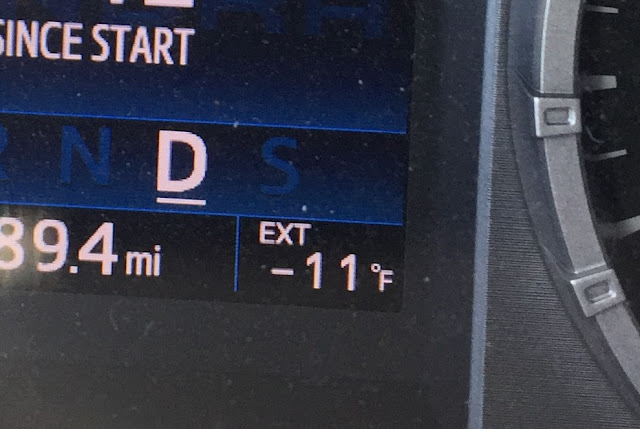 As we drove up the truck registered at its coldest -11 degrees.  By the time we made our way to the water it was 0 degrees.  We were told snow was 4-5 feet deep which meant snowshoes were required at a minimum and snowmobiles for access for the upper stretches. 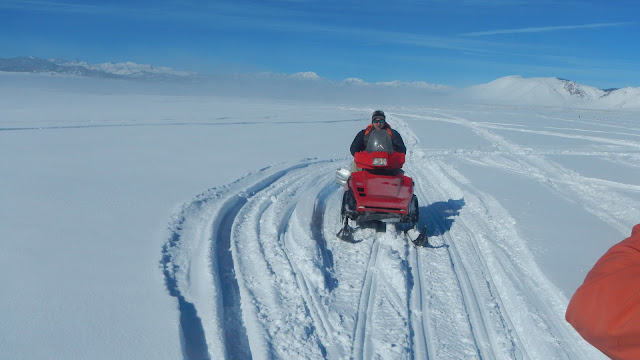 After a quick tutorial on driving the snowmobiles, we set off to the river. 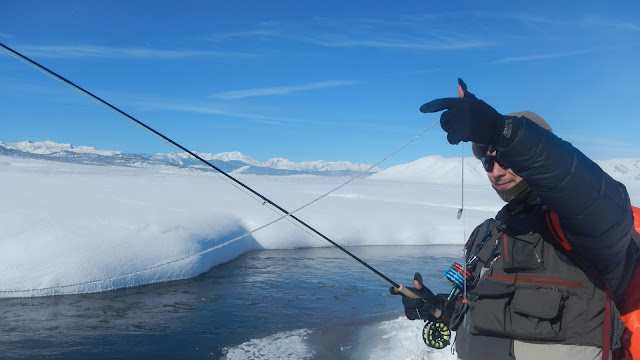 Our first hole we noticed ice floating downstream which was not a good sign.  This was precisely what we feared prior to coming here.  With temps near 0 degrees, we noticed our flyline becoming impossible to cast.  The cause?  Our entire leader and fly line froze solid.  It was so cold even putting the lines back in the water and shaking it did nothing to de-ice the setup.  Our guide, was biting the ice off the rig.  He said that was a first. 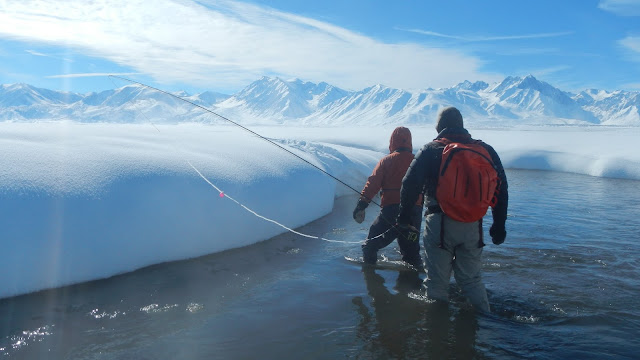 As you can see from the picture above we gave up on biting all the ice and with mini icebergs coming our way we moved downstream where geothermal water was entering the river.    We would melt the ice off the rig with the warmer water further down. 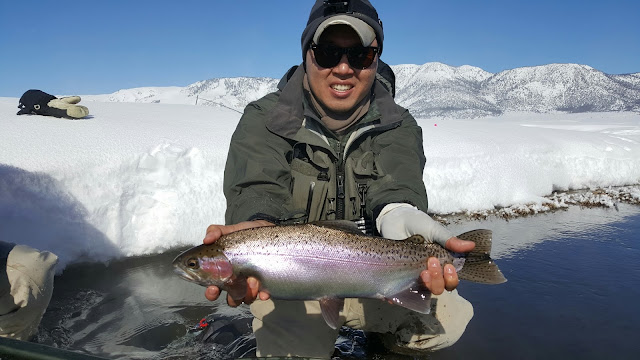 With the sun now stronger and the air warming, it was not long before I managed my first fish of the day.  It was still "cold" (it was cold all day) so the fish was somewhat lethargic, luckily as the guides on the flyrod froze solid.  So now I had no line coming in or out of the rod.  I managed to pull the fish into Doug's net though bamboo cane style.  Had this girl made any serious runs I certainly would have lost her. 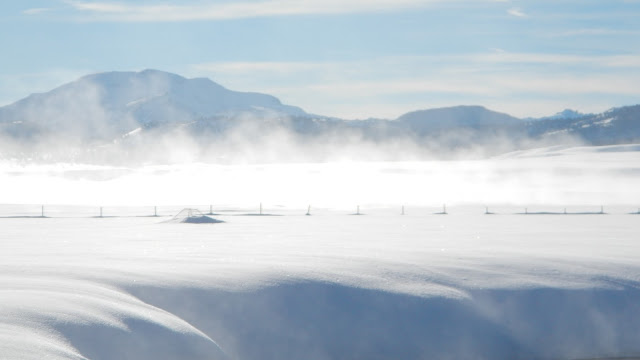 Hours past and Doug worked hard for us and we were trying desperately to get Chul his fish.  He was not without his chances.  At one run he lost two.  One from over aggressively setting his hook Bassmasters style and another by breaking the leader by yanking of a beast's mouth when it jumped.  The second could have easily been a 7 or more pounder. On the first the indicator was floating around with the fish still attached.  Doug rerigged with a heavy weight and heavy beadhead nymph then proceeded to cast to the indicator to wrap the fly around the bobber.  Once we pulled it in though the fish had already broke lose. 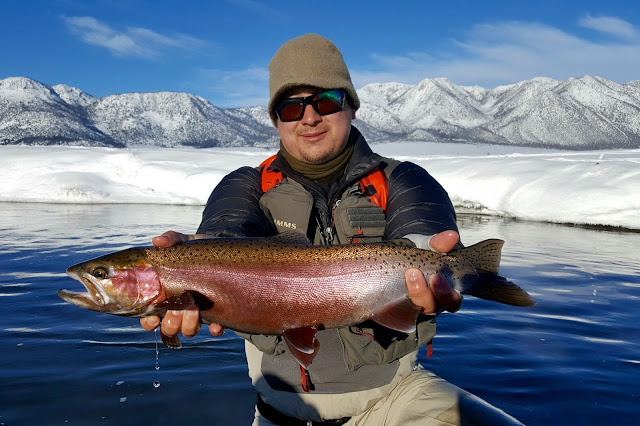 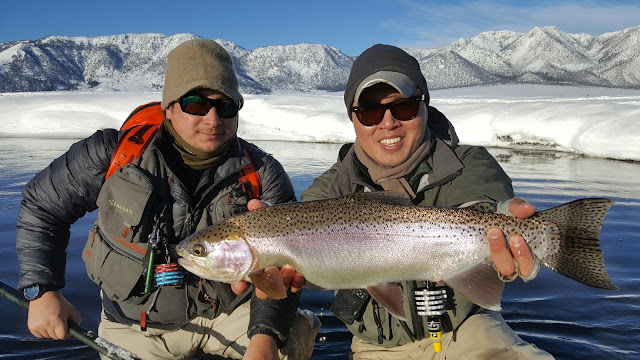 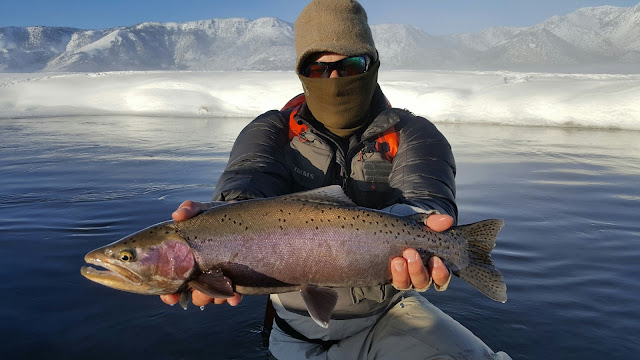 Time past without another hook up until on our last hole of the day, Chul finally landed his first snowbow of the day.  Then Doug had me give this run a few casts and within no time I was on my second hen of the day, the biggest landed (Chul's lost fish was the biggest seen and hooked) among the two of us.  Doug estimated it in the 4-5 pound range.  Chul was up again and in no time he was on.  After a brief fight he broke the leader at he connection point.  Like before we could see the indicator floating around moving as the fish cruised deep up and down in the pool.  Again Doug rerigged and casted to the bobber but this time the fish remained hooked.  Chul now had a second chance at this guy.  Turned out to be another male nicely purplish colored.  Doug estimated it to be in the 4ish range. 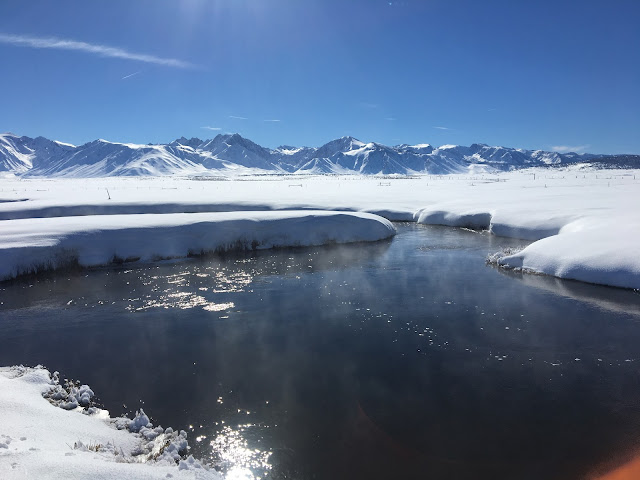 We booked a half day on the water.  When Chul asked him later in the day, knowing our time was nearly up, "What time is our trip over?" Doug simply responded "When we fish all these upcoming holes."  The hours he added equated nearly to a full day trip despite us paying only half day rates.  We also didn't take a lunch so he very worked hard for us.  I know he really wanted to get Chul on a fish.  Even at the last hole when Chul finally landed one, we continued fishing and told me I'm up now.  After I managed a fish he had Chul go again.  I for sure thought he was going to end the day after I landed mine. 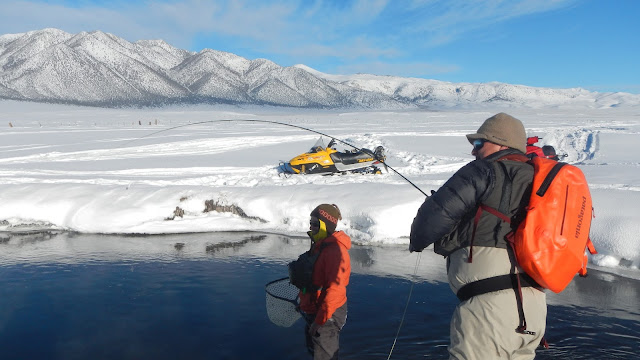 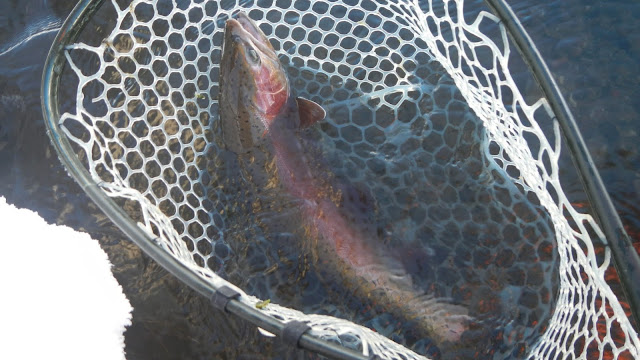 When the day was through I removed my waders at the truck.  I didn't want to wait til we made it down the mountain as my toes were freezing all day.  I had layered up perfectly for the most part with the exception of my fingers (I left my full finger gloves in my truck when I arrived at Chul's) and my toes.  Strange I thought as I was wearing expedition weight socks.  I asked and none of the others had cold toes but me through the day.  I thought to myself maybe perhaps I was mistaken I didn't put on expedition weight socks.  Once I removed my waders, I noticed why.  My left sock was soaking wet.  I had a leak in my waders.  Luckily with this cold I didn't get frostbite.  I dried my foot and changed socks and jumped in the truck placed my foot in front of the vents and tried to warm my toes with the hot air.  Looks like I'm in need of new Simms, looks like these bad boys are toast.  He's served me over a decade and a half of hard use.  I certainly got my money's worth. I learned next time in conditions like these, I better check for leaks prior to the trip.  Also not to forget my full finger gloves for when not fishing.  Fortunately as any good guide, Doug brought spares. In addition, as recommended by famed guide Kelly Galloup, I'll also bring a small towel for drying hands after touching fish or getting your hands wet.  I won't make those mistakes again.  After dinner in Bishop we decided to forgo staying the night only to leave the next morning.  So we suicide ran it back home for the 6 hour drive.
Posted by gourmetsportsman at 10:47 PM