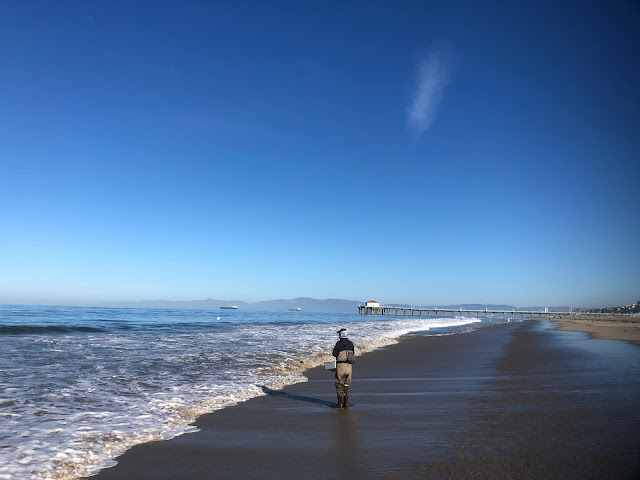 Koji was in town briefly for a layover and asked if I could take him out fishing.  Unfortunately given the timing and timeframe no real good options were available.  So I could only take him out surf fishing.  Although I'll admit catching corbina is fun, I am not a fan of fly fishing the surf.  I took part of the early 2000s surf fishing craze and often would fish before work with some local "big" names.  That craze has since died and only rarely do I return to the beach to fish.

Not knowing the beaches around LAX I asked some South Bay friends for guidance.  After being directed towards the Strands area I decided to try there for the morning.  Crowds were already gathered.  I knew fishing was going to be tough and it was.  Koji and I both suffered the skunk and quit early than planned.  Fishing conditions simply were not in our favor.  Sets between waves were to close and the water was too murky to sight cast for corbina.  So we resorted to blind casting into anything we deemed as structure.  There were barely any troughs to exploit.  I did see some baitfish jumping out of the water at one point but once I casted in the direction the waves would sweep my line away from the intended target.

Instead of prolonging our misery we cut short the fishing and I treated Koji to breakfast before driving him to LAX.   Another US trip with Koji and it was a bust.  Sorry man.

Posted by gourmetsportsman at 1:46 PM No comments: