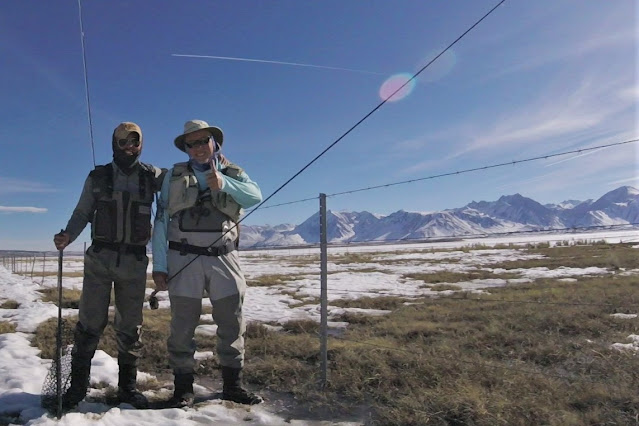 Back in my high school all the way through my early working years I fished Canyon Lake as my one of my best friend's father had a vacation home there.  He would call me into the community so I could fish it any time.  Then that stopped when the Association changed the rules and my buddy no longer could call me in.  A decade or so later I joined a local fly fishing forum.  That is where I met my friend Luc.   I noticed he lived in Canyon Lake and I not so subtlety tried to get  him to invite me to the lake despite being new to the board.  Eventually I did get an invite from him and we have been good friends ever since.  I consider him a fishing mentor and I've learned a lot from him.  Whenever I'm going to fish new water he can usually expect a phone call from me.  Whether or not he's fished that water he's a good source as he at least has some idea of how to fish it.  And if he has fished it he's definitely going to give me enough info to lessen the learning curve. 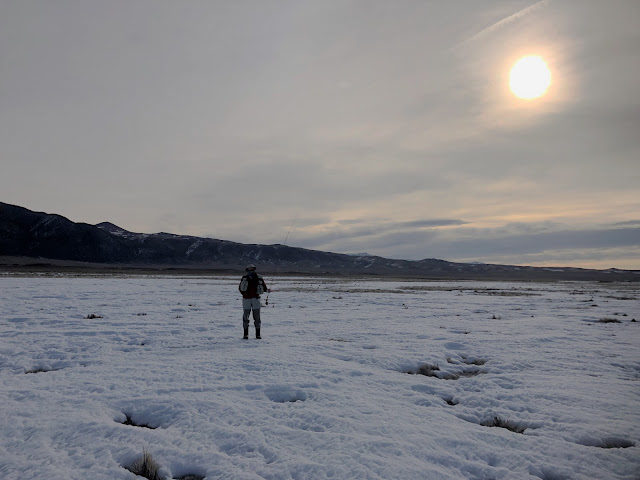 On this day we'd fish the upper and it would require another day of  slogging through the snow. As I knew Luc would be a slow hiker I wanted us to be the first on the water so we'd have first crack at the choice holes.  When we came into sight of water I was discouraged that there was three trucks already parked at the first two parking lots.  This gave be a bit of anxiety as I knew we'd be fishing behind others who could have blown out the holes.  Two trucks were parked at the second parking lot and one was parked at the entrance.  I drove down to the second parking lot but after getting out and looking at the ground I decided it may not be wise to park there.  The ground was a mix of snow and iced over mud.  Once the sun started to warm the ground that mud could potentially get us stuck.  So I dropped Luc off with our gear and drove back to the entrance.  Already feeling hurried I didn't realize I left all my gear behind.  My weights, fly box, indicators, everything.  I didn't realize this until I was a quarter mile away from my truck.  The day before I told Luc to empty his vest to just bare essentials to out to lighten it up for the hike.  I gave him one of my egg boxes that had a few weights and hooks but not many.  I had nothing just what was rigged on my rod.  Living dangerously.  I better not break off or I'd have a real problem. 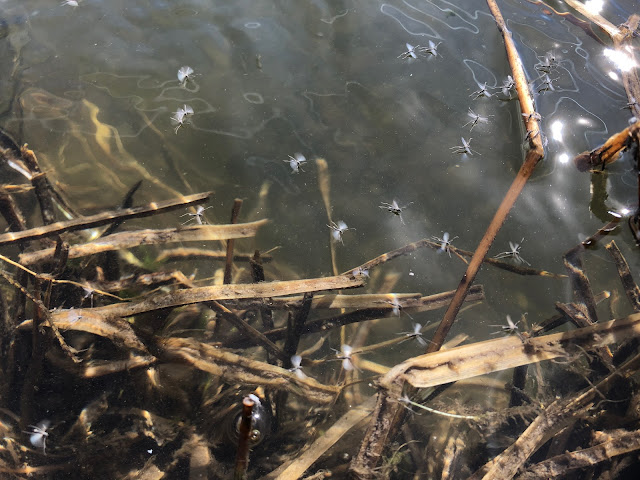 The anglers parked at the entrance fished immediately adjacent to the lot.  So I didn't have to worry about them.  A guide was ahead of us with three of his clients.  They were fishing the very hole I wanted to start.  As we moved closer to the hole they left and we took it over.  It wasn't long before Luc was hooked up but after it breached the surface it popped off.  It took a long while to get another bite.  The water was low and slower than I've been used to.  I was surprised considering how much weather we got this winter.  Luc was fishing a paragon dropper on his egg system.  It added too much weight to his rig and his set up was heavy given the water conditions.  Unfortunately he left his split shot behind.  I thought I had various lighter weights in my waders but I had removed them when I went to the Trinity earlier this year.  Even without a dropper my set up was just slightly too heavy. and without any other size split shot I would have to just deal with it.  Several holes later Luc broke off on some vegetation and he rerigged. He decided to abandon the egg set up.  Luckily Lu brought a small container of nymphs mostly paragons.  Since they were the heaviest flies he had he chose those.  I showed him how Kelly Galloup attaches his a dropper fly using a piece of tippet with a dropper loop.  After that he attached two different color paragons and abandoned the split shot.  With both heavy flies it was just about enough weight for the current conditions.

While Luc managed a quick take earlier in the morning after that it was a complete slog it would be a couple hours before we saw some action.  Eventually I managed to get one to take.  It didn't fight much and I was able to land it easily with a long handled net that I borrowed from my buddy for this trip.  Self landing fish is such a breeze I'm going to have to bite the bullet and get one. 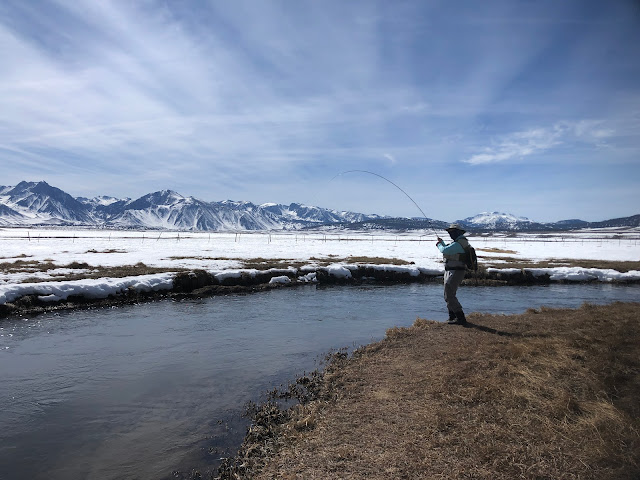 After I released the fish I essentially stopped fishing and devoted my energy on getting Luc a fish.  He'd switch from fishing my rod with the egg set up and his indicator double nymph rig.  As we moved from one unsuccessful hole to the next I was starting to stress out. As we continued moving upstream I noticed the guide and his clients were parked at the "Glory Hole" the whole time.   I never did notice any of them on fish.  Nor did I ever see them move from that spot. 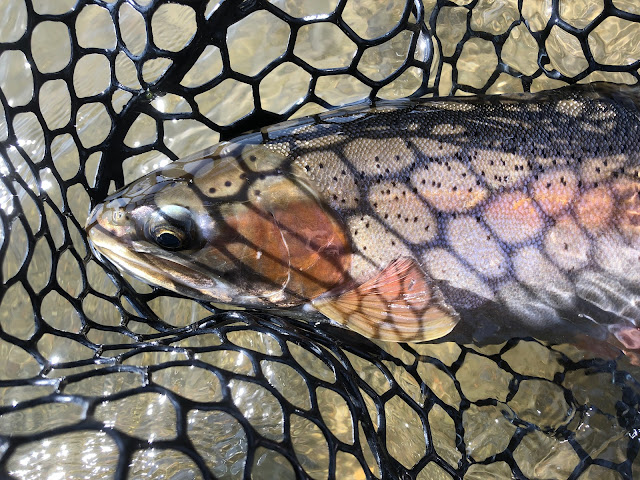 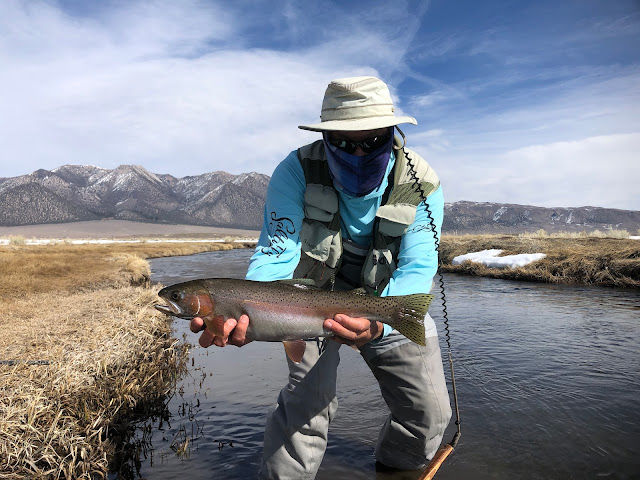 By noon we were closely reaching the hole when the guide and his clients were heading off the water.  When reached the Glory Hole Luc fished it hard with both set ups but didn't have one take.  We left and fished the hole above it.  Another anger came in and took the now abandoned hole.  While fishing the new hole I look back at the angler and he was one a fish.  I look at Luc and said "I don't think it's your day."  We'd continue upstream and had Luc's back was starting to get sore so I told him to have lunch and relax.  After lunch it wasn't long before Luc was on a fish.  A nice fish in the 20 plus range.  The fish much darker and had already spawned unlike mine. Like mine his fish didn't have much fight in him either for some reason. In between holes Luc and I would chat and he'd teach me a different way to tie a clinch knot or how to improve my mending technique.  Watching him mend is like watching a masterclass.  He does it so effortlessly and gracefully unlike me. 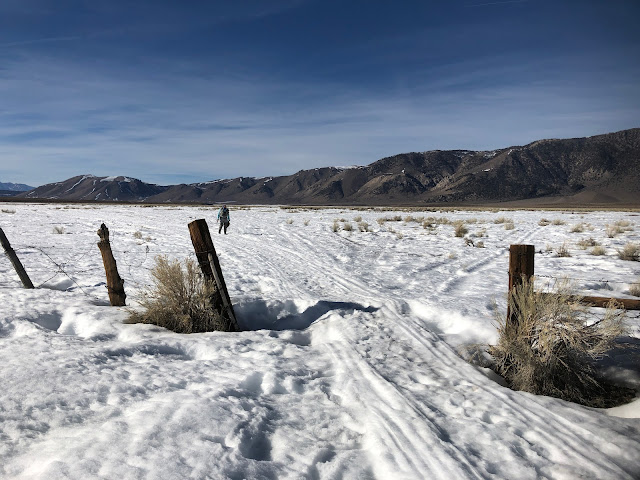 By 3pm I really wanted to continue fishing but the water looked less and less promising and I knew with every step away from the truck was another Luc would need to make to get back.  After examining the next five bends and seeing that that were shallow and not very promising I asked Luc if he wanted to call it quits.  He agreed.  The hike out was a mix of packed snow, melted ice and sloppy mud.  I'm sure it wasn't a fun hike for Luc but he just took his time.  For dinner we'd stop for burritos at Mercado Mexico before we made the push home.  Although the fishing wasn't great I'm glad I was able spend time on the water with Luc.  Can't wait to do it again with him.

Posted by gourmetsportsman at 11:57 AM