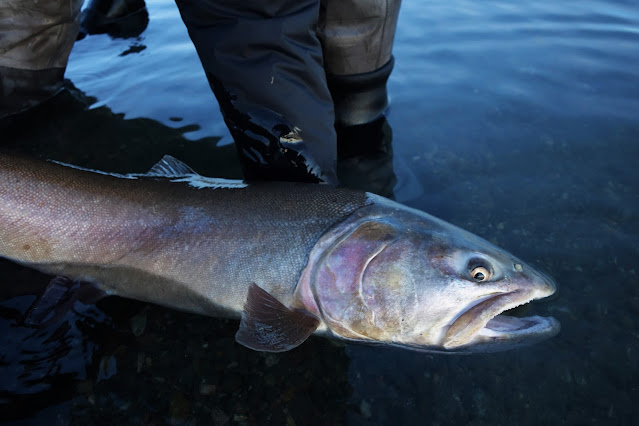 Pyramid Lake was a tack-on to this trip and put on the agenda late in the planning stages.  It was never our intention to fish it but given the fact we were already in the Northernmost parts of the state we decided to give it a shot.  This way we could save us another long drive in a separate trip.  Crossing over a Lahontan Cutthroat has been on my agenda for a while.  I know this lake is popular but I don't see the appeal.  Yes.  I get it it has big fish and it's you're best shot at getting a trophy trout.  But honestly I could care less.  To me the only appeal of this place is catching a prehistoric fish in its original home range.  Other than that this place has absolutely no interest to me.  Most people fish trout because where it takes you are some beautiful places.  Pyramid isn't really one of them.  It has it's moments, usually at dusk and dawn, but mostly it's rather unattractive.  Catching a fish requires more patience than skill.  You stand on a ladder or rock and cast a silly looking streamer and strip.  When you tire of that you cast a midge and stare at a bobber until you are energized to start stripping again. 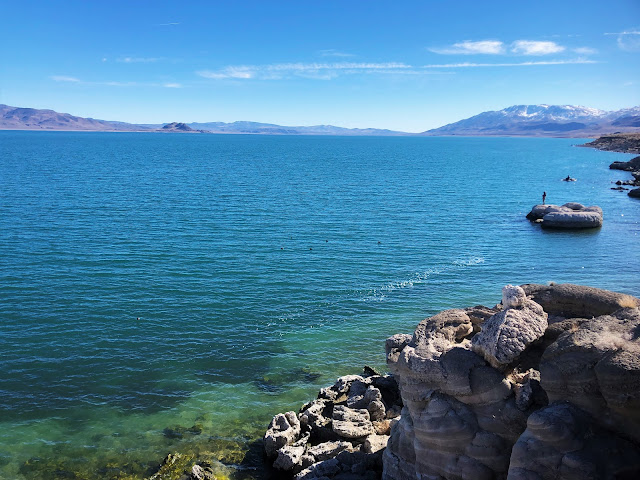 I've fished here once before on a whim.  We were fishing the Truckee and the weather turned so nasty on us that it was almost unfishable.  So instead of battling the elements we moved to Pyramid to take advantage of the bad weather. Pyramid usually fishes well in foul weather.  Overcast and winds usually turn up the fish.  Of course I was completely unprepared as I didn't bring any proper gear to fish this lake at the time.  All I had was five weights and some very small indicators.  I was completely undergunned.  I didn't like the fishing experience at all and other than scratching off this fish on species list I had no desire to return. 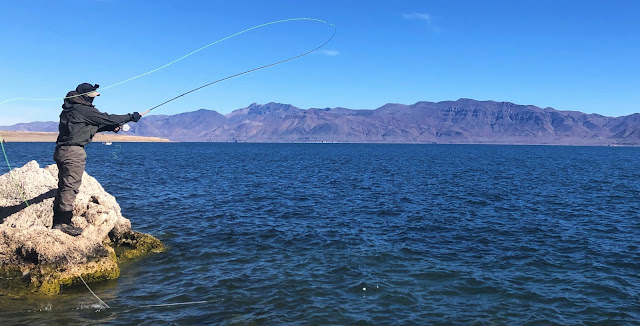 We got off to a late start and should have been on the water just as the sun was rising.  Pelican Point would be the first destination.  Of course all the premium locations were already occupied.  So we took to the cliffs.  After about a few minutes of climbing the rocks I realized why I hated this place.  With little to no places to properly backcast it wasn't long before I realized this was futile.  After a couple hours I went back to the truck, ate a sandwich and re-rigged my spey rod and returned to the rocks.  By this time the sun was high fishing had ceased for everyone.  Earlier in the morning the fish were being caught by anglers in the prime spots now they were also being shut out now.  It was time for a break. 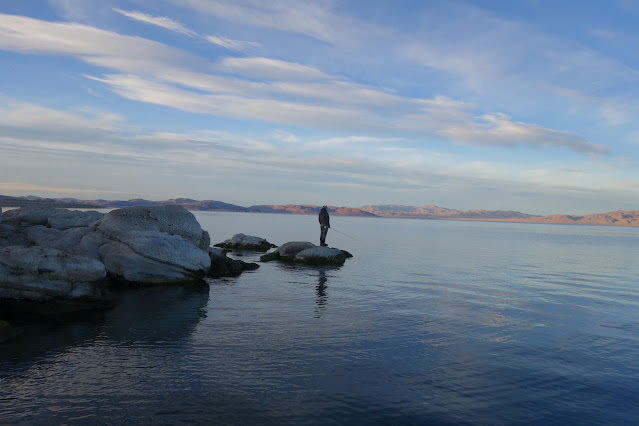 Frustrated and ready for a break we drove down to the lodge where we relax and have a drink and get some intel from the locals.  Now with a few drinks in him and intel gathered from a few generous anglers we headed off to the next location, Warrior Point, to fish until sunset.  I'd get one strike on my streamer but it took in between strips and got away from me. 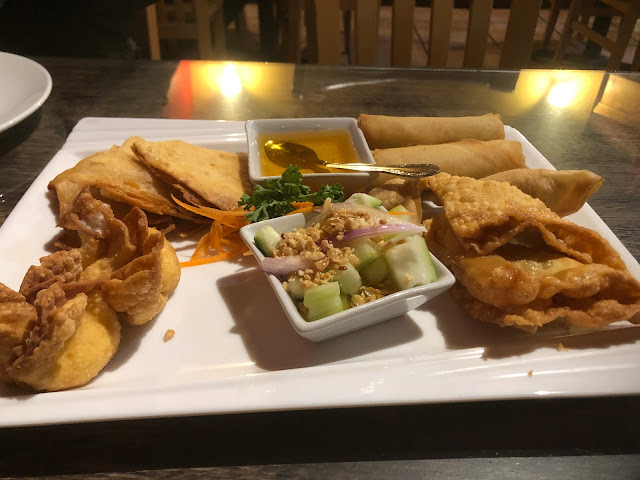 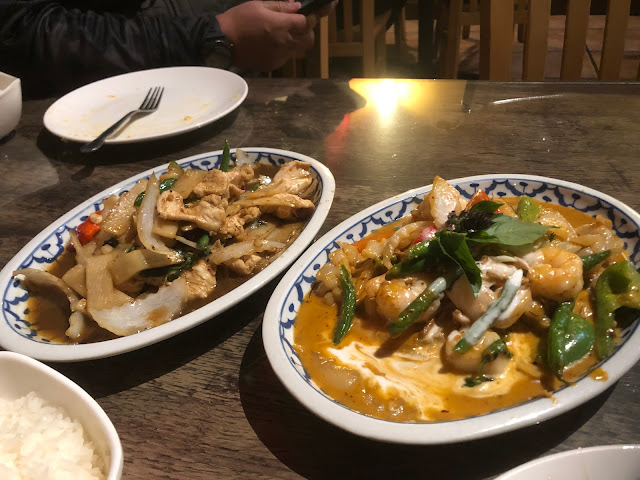 Another bust and it was time to head back to Sparks for dinner.  Upset we'd have to return the next day to get our fish we needed a morale boost.  So we returned to the Thai spot since it was on the way and we knew it was good. 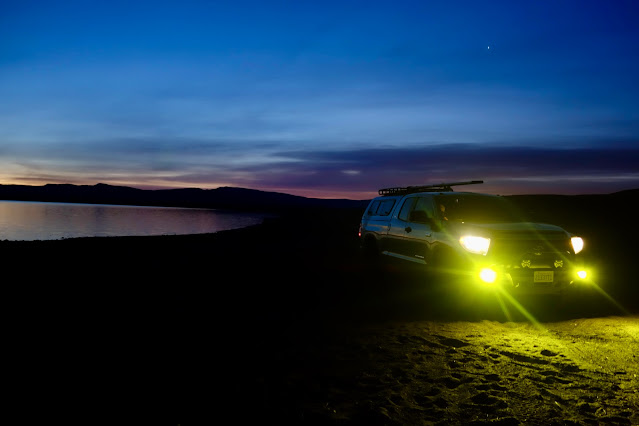 The following morning we woke up early and packed our gear away and headed off to the lake for our last attempt.  Unlike the previous day we were there long before sunrise.  We'd only have the morning to fish as we needed to start our way south.  By now we were already over this place.  The weather reports called for another day of calm sunshine so we knew we'd have to really work to get a fish.  Starting with sinking lines, booby and beetle flies we began casting.  The area we fished was our initial destination for last night's session but getting to Warrior took longer than anticipated so we just stayed there. 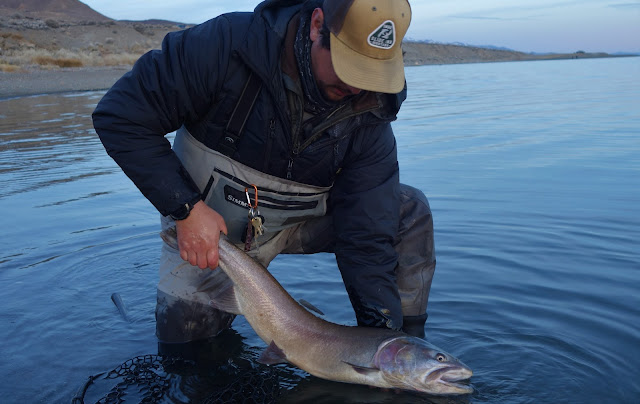 Just as the sun was rising Chul was on his olive booby fly.  I stripped my line in and grabbed the net off the bank and prepared to scoop the fish.  While waiting for the fish to tire I was thoroughly unimpressed with the fight.  Standing in the water I watched both the fish and Chul fighting the fish and realized that, like other cutthroat, these fish don't do anything.  It looked like Chul had a wet towel at the end of his line.  I then watched the fish.  It didn't run more that 10 feet and gave a head shake once in a while.  No bulldogging.  Nothing.  What a boring fish. 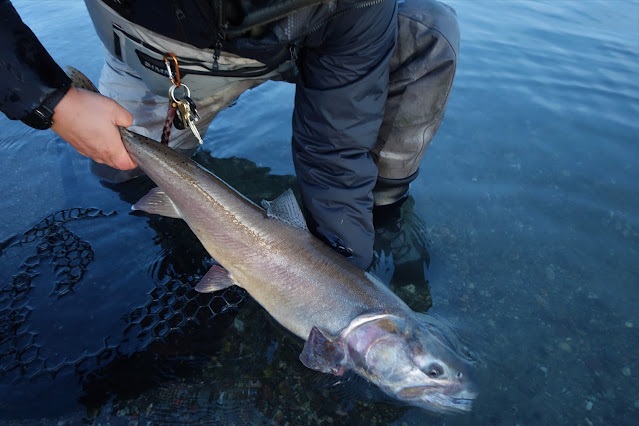 It didn't take long before the fish was in the net and after a few photos we released it back.  I would try to get mine but it wouldn't be in cards for me.  We'd drive to a few more spots to find fish but it was no use.  Sun was now high and fishing seemed hopeless and by 11am we set off south which means I'd have to return to this place to finally get this damn fish crossed off my species list.  Of course I could get them elsewhere but I would prefer to get this fish in it's native home waters.  Once I do I doubt I'd ever return. 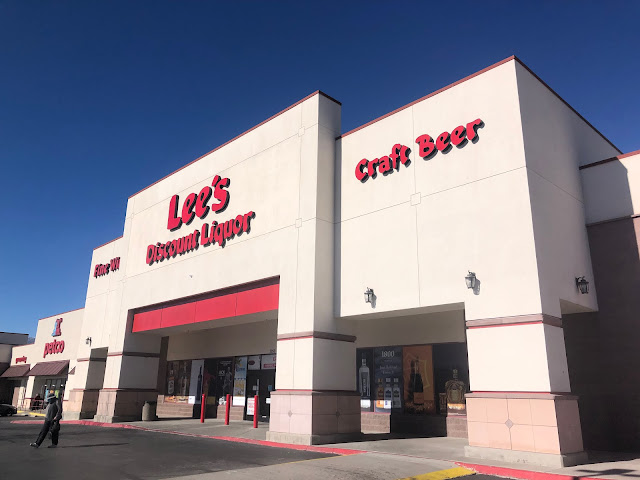 When we reached Reno we made a stop for lunch and  to get some adult beverages.  Lunch would be Thai again and I order the heat level the same 4 out of 5 we did in Sparks.  That was a mistake.  Their spicy levels were more in line with Thai palates and while the heat was nice but it was quite a kick causing some running noses.  The food though was excellent.  I've been impressed with Northern Nevada Asian food so far. 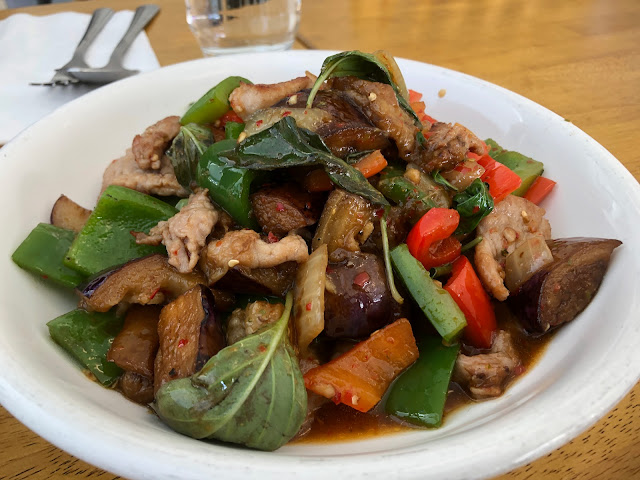 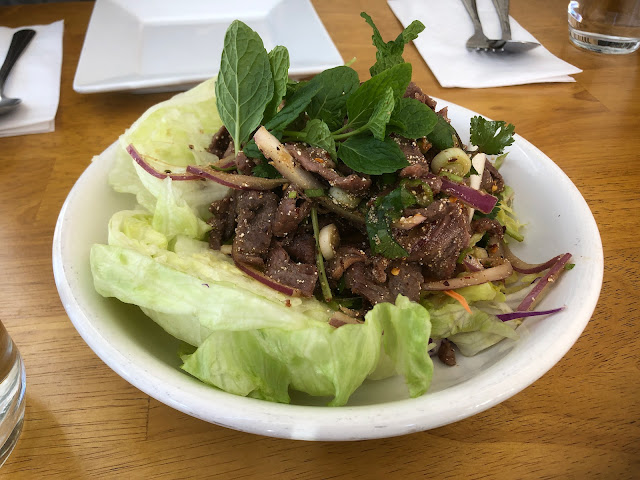 On the drive south we'd decide whether to spend a night camping somewhere in the Owens Valley or just gun it home.  We'd take a look at the West Walker to see if it was wroth a cast or two on dry flies.  This was to break the drive up but once we got there the winds were howling and the water was not only skinny but frozen over in many areas including much of the bank.  So we moved on.  Once we reached the Owens Valley we had to decide whether we wanted to stay the night and camp and possibly fish in the morning.  We decided against fishing as we were already exhausted and were fished out.  The biggest decision then was what we'd have for dinner.  We thought of getting Thai again at the Bishop airport but decided against it for tacos at Mercado Mexico. 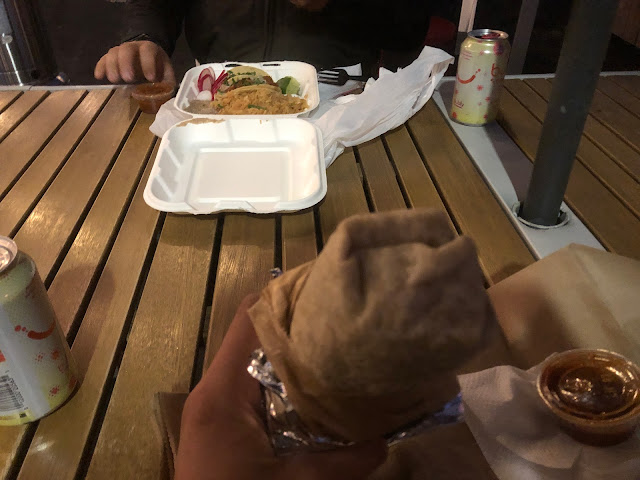 After eating we'd see how we felt and if we had the energy to drive home or needed to camp.  Prior to dinner we thought of camping in the Alabama Hills but as we ate outside the wind was picking up and blowing hard and that sealed the deal we'd head home.  As goes with fishing, the trip was mostly a bust at least for me but so it goes.  I didn't expect much on the steelhead leg of the trip but the biggest disappointment was failing to get my cutthroat which means I'll have to return to Pyramid again.  My buddy Roy has some trips lined up in the coming months but I really don't want to go but we'll see.

Posted by gourmetsportsman at 10:48 PM