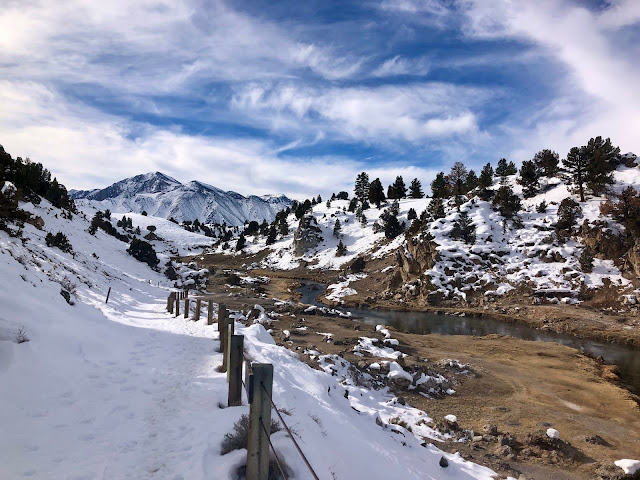 On this weekend we were supposed to be heading north fishing steelhead but that trip needed to be postponed.  Instead we opted to head back to the eastside for some revenge for our last poor outing.  I woke up at 3:35am to get ready to meet my buddy in  Bishop. 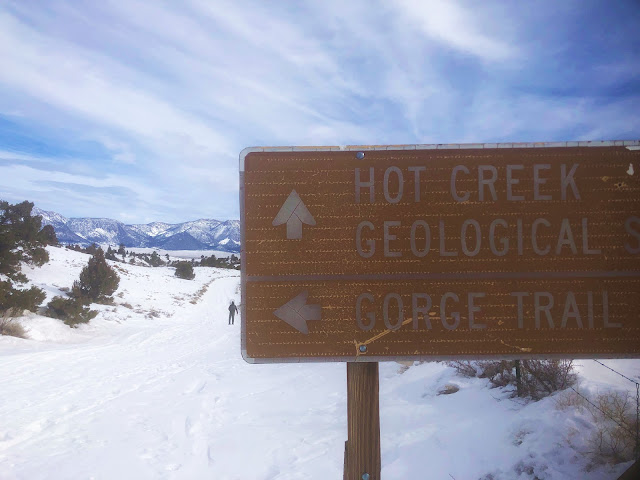 We met up on the road and gassed up at Big Pine and a decision needed to made.  Where to fish?  Exhausted from the long drive and lack of sleep we saved the Upper for the next day.  Since I've never fished Hot Creek while completely blanketed with snow that was where we'd go.  As the road is not plowed from the gate we'd have to snowshoe in.  Another reason for choosing this water is we didn't need to wader up. 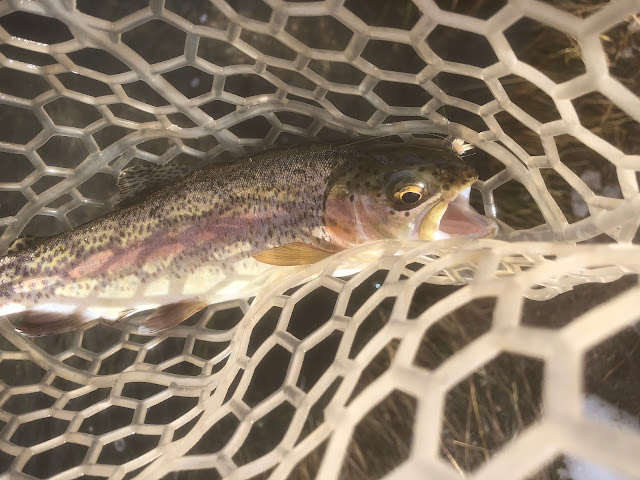 Already rigged up from the last trip I took out my prerigged four weight tied with Galloup's Found Link tied as a trico in a size 18.  I figured the pattern could pass for a BWO or a midge. We snowshoed to the geological site and made our way down the trail so we could fish upstream and back toward the trucks.  Once down into the canyon searched for rising fish. 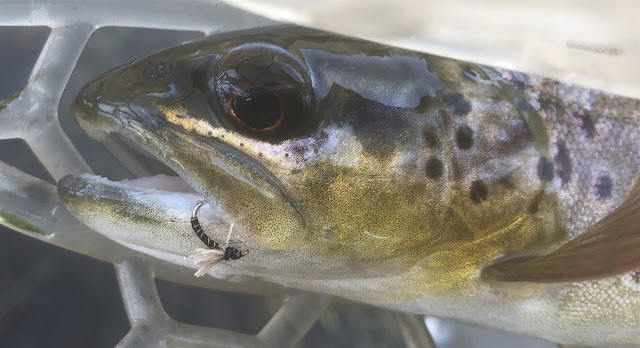 Chul found the first pod taking emergers while I was unsuccessful downstream of him.  He'd catch several more before I caught up to him.  He told me they were taking small emergers in 20 or 22 just beneath the surface.  So instead of taking off my dry I dropped 12 inches of 6x tippet to my fly and tied a black three dollar dip in a size 20.  I would catch a number of fish in mostly the 6-9 inch range and a few in the 10 or 11 inch.  The largest of the bunch took the dry.  After a while we moved on upstream looking for more willing fish. 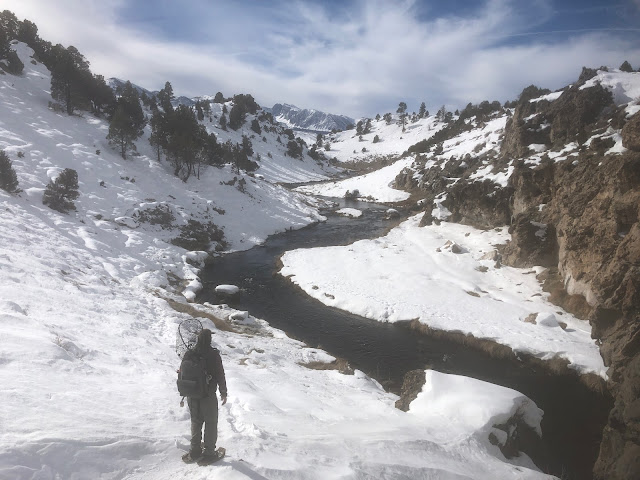 Hiking upstream we'd search for more fish but the rises were limited.  We did find a fish in 16-18 inch range that we casted to but this meat eater had no interest in our tiny flies.  We didn't bring our streamers but I'm sure that would have enticed a strike. Having this creek without a crowd is almost unheard of but on this day the water was all ours up until the end when we saw one angler fishing the property border.  But before even seeing him we had fished 90% of the creek.  One concern we had particularly when climbing over elevated portions of the trail were hidden air pockets covered in snow which would prove a justifiable concern on our way out. 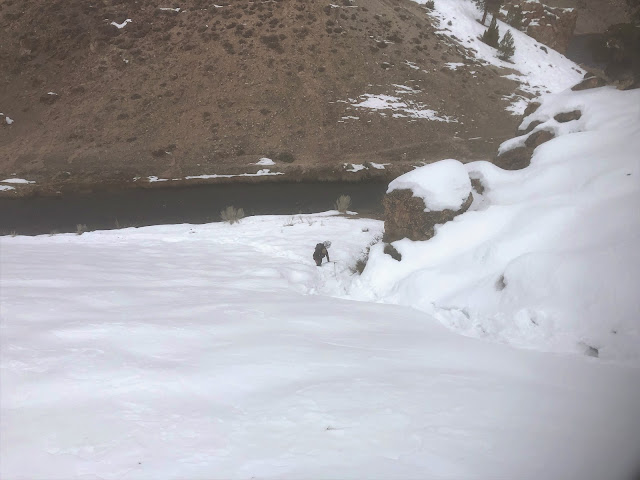 I did find another section where I saw a rise and I started casting to the fish.  It sparked more rises from other fish.  I caught a few more and lost two very good ones including a 14 incher that spit the hook after a few jumps.  We'd continue upstream only to find that angler fishing toward the border.  At that point we decided to head up the gorge trail to get out.  All morning we tried to stay on well worn footprints to avoid hidden air pockets.  Watching Chul reel up started my way out of the canyon.  I took a path up that looked well worn but once I was half way up the canyon the footprint path vanished.  Chul from below stating it was safer on the path he took.  I said he's right but I was too tired to go back down and was pot committed now so I charged up to the main trail.  Chul having taken the "safer" path ended up finding that air pocket that dropped him in the snow balls deep and he struggled to get out.  Eventually he did mange to pull himself out of the predicament. 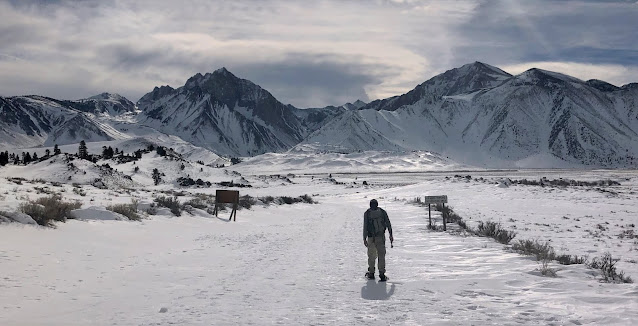 Earlier in the day once down to the geological site one of Chul's straps on his snowshoe broke.  As we hiked out more straps failed on him and lucky most of the snow on the main road was packed enough that the shies were not necessary.  While he didn't need it for the rest of the hike out  this day he would need a pair following day on the Upper.  So after lunch he'd have to make some calls to all the sporting good stores both Mammoth and Bishop to see if they had any spare straps for his model of shoe.  None had any available so he had to go into town to rent some before making it to camp.

Posted by gourmetsportsman at 9:19 AM