Escape From LA Part I: Utah 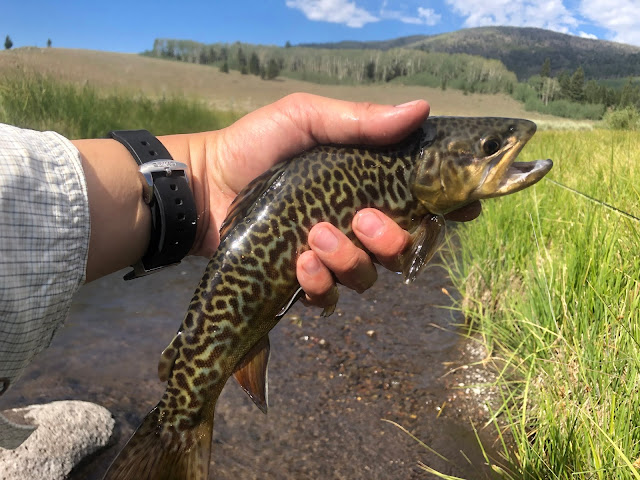 The boys of South Bay wanted to get the hell out of California and we discussed a road trip to somewhere other than this place.  Discussions of Idaho, Montana, Wyoming were considered but Colorado won out.  I didn't know much about Colorado other than it's California Lite.  I know there is good fishing but that's about all I knew.  Planning of this trip laid on my shoulders so I looked into options and started making calls and calling in favors. 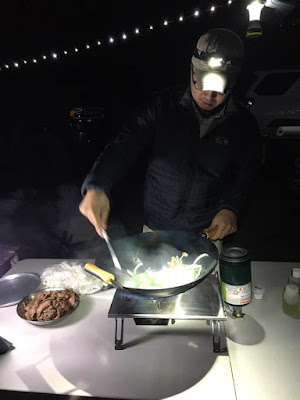 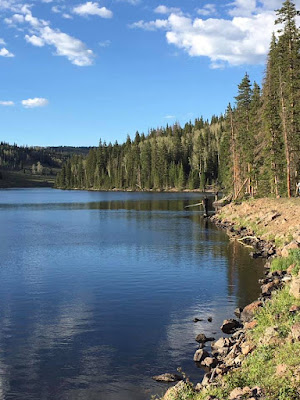 On the agenda for the first day was Manning Reservoir.  I generally do not like fishing lakes particularly from shore but I was told these fish like to hug the banks.  Seemed like everyone was getting on fish but me.  They all crowded the bank I wanted to fish but I opted to avoid them and fish the other side.  That proved a mistake as the fish on the other side were all dinks and all the good ones were on the other.  After a couple hours it was back to camp for dinner and some relaxation. 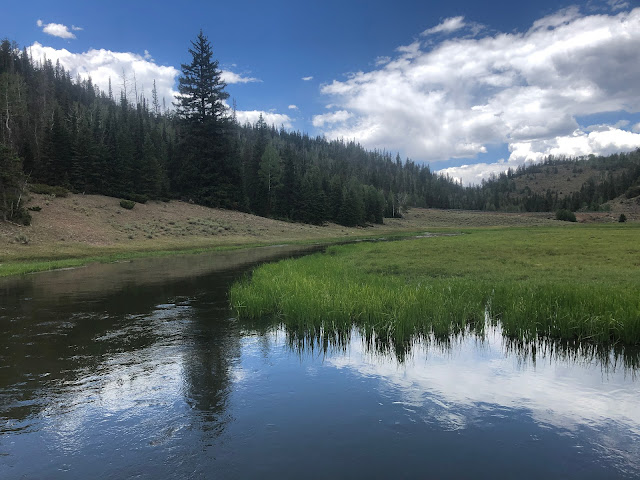 The following morning we headed north to our next destination in Utah.  The first creek was simply too small to fish all six of us and the fish were all dinks.  It wasn't worth our time.  So we tried a nearby river.  Water looked good and all indications were it should fish well.  But between all of us Joel was the only one to get a bite, he did say it was a big one.  He was nymphing while the rest of us were all on top water.  After a few hours it was time to find a camp. 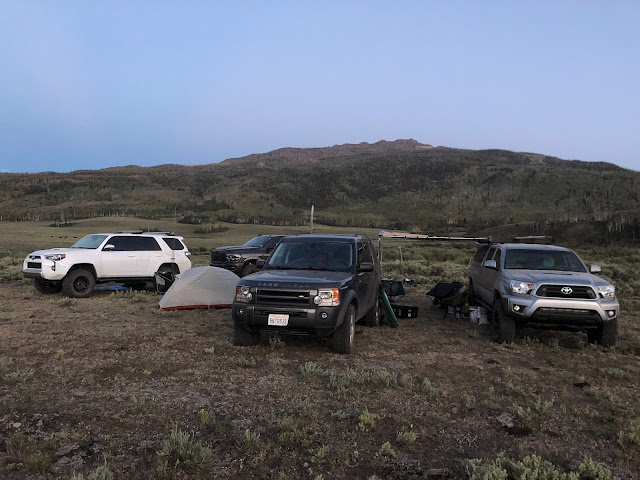 The mountain was crowded.  More so than I ever seen.  I guess everyone were sick of lock downs too.  I couldn't believe how many RVs and trailer made it up that mountain.  It took some time but we managed to find a decent camp seclude from others. 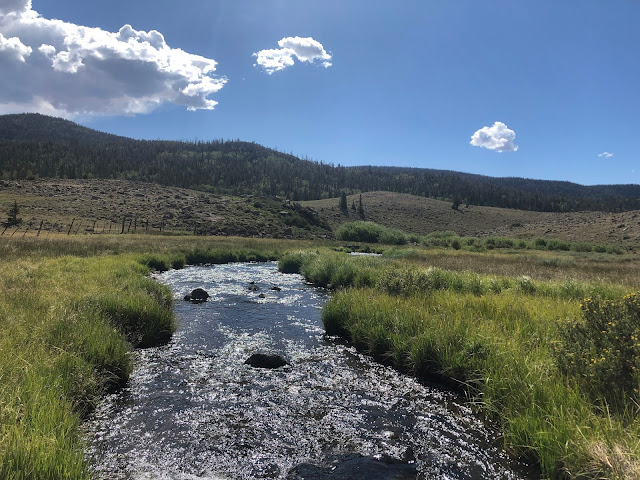 Next morning we split to fish different sections.  When we met up later in the morning I was told JP took off to Colorado already which pissed me off somewhat as I had planned this creek for his son as it would almost guarantee him a fish.  I knew the rest of the trip would require more skill than most rookie fly fisherman process.  Planning trips can be stressful as you're trying to please everyone.  We had three rookies in the group and I wanted to make sure there was something for them on this trip.  So the rest of us stayed to fish it. 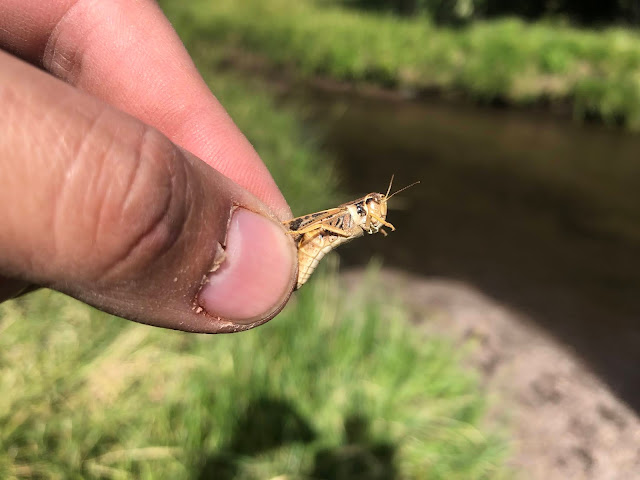 Fishing was good and I managed the tiger trout that eluded me the previous year.  I could now mark that on my species lists. 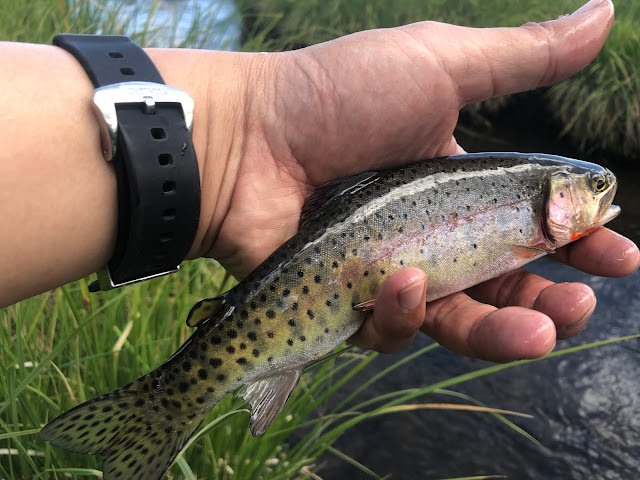 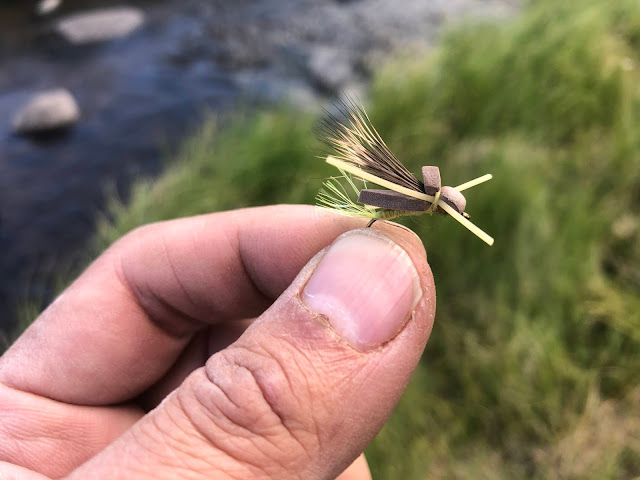 Small hoppers lined the banks and were the ticket for this day and there were plenty of grabs on this particular fly. 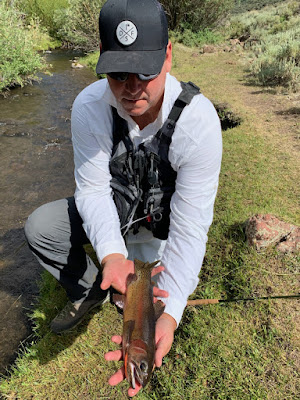 Eric, Capt America, is Mike's best childhood friend and invited him along for this trip.  He's an avid fisherman and took up fly fishing just for this trip.  He said he only practiced casting a couple days before coming.

I quickly learned I didn't have to worry about him. He had this dialed in and knew what he was doing.  A real natural.

He'd already caught a few good fish the previous day and now he'd gotten the best fish of the trip so far.  At that time that was the largest fish I'd ever seen out of this tiny creek.

As the trip progressed he'd continue to impress with his natural ability.  He figured out early how it all comes together.  Even indicator nymphing which is the most complex way to fly fish.  Didn't matter the technique this guy had it going on.

I'm starting to believe he was all lying to us and has been doing this for years. 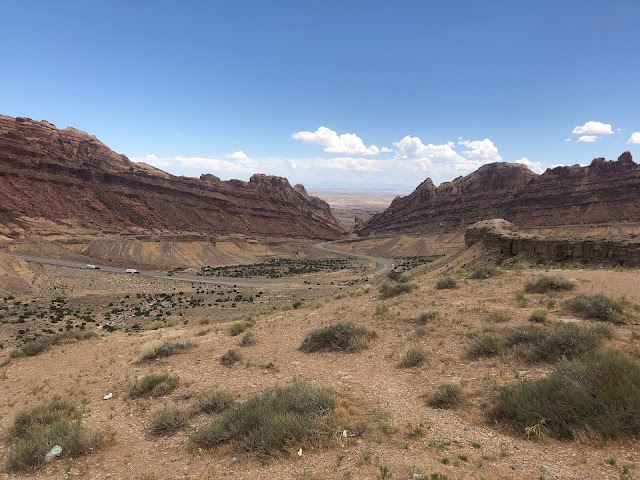 By late afternoon it was time to start our way to Grand Junction Colorado to get intel and fishing license for the next few days.

Posted by gourmetsportsman at 3:29 PM