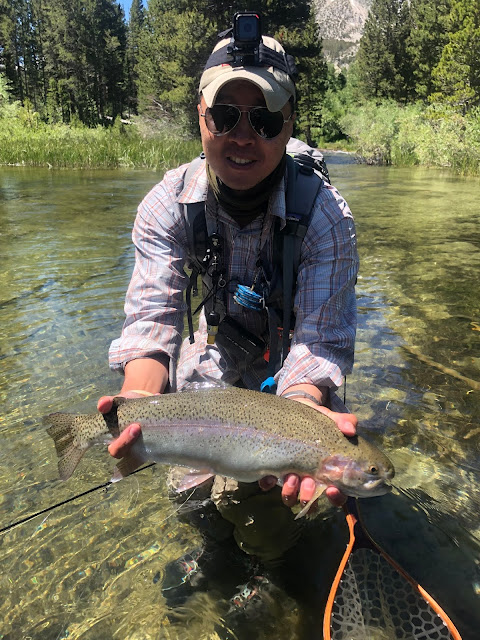 Took off with Kelly again for another weekender in the Sierra this time for three days.  Friday was a road day as we got out of the South Bay later than planned and so we had no time to wet a line.

The next morning we set off to the Upper.  I began assembling my four weight rod and debated whether to fish dries exclusively or try for some fish subsurface throughout the day.  This decision would dictate which reel I'd use.  Ultimately I chose to fish exclusively with dries.  Starting with a hopper fly it didn't take long before I managed my first fish.  I'd catch more sporadically throughout the morning.  Eventually I caught up with Kelly where he gave me a BWO wally wing fly after landing a respectable 12 incher.  With the BWO I caught several more before I got bored with catching smallish fish.  None of my fish were bigger than 8 inches.  So I headed back to the truck for lunch while Kelly continued to fish. 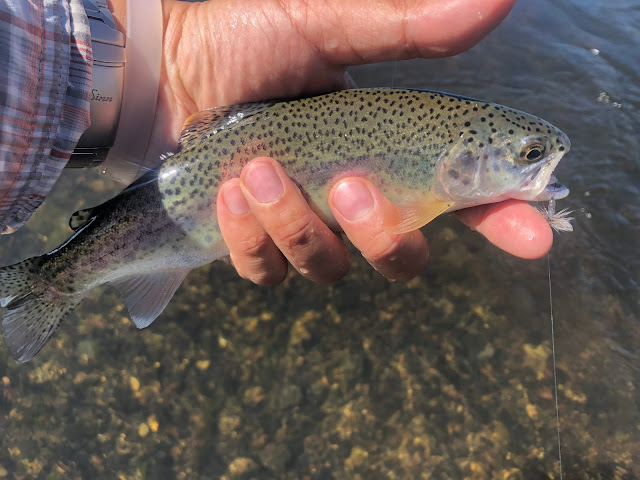 After lunch we set off to Hot Creek and it was much of the same.  Small fish on dries and nothing much to speak of.  We had an appointment to meet Kelly's friend at a distillery in Mammoth at 4pm so we left.

Came back to the upper and finished the day catching more smallish fish on dries. 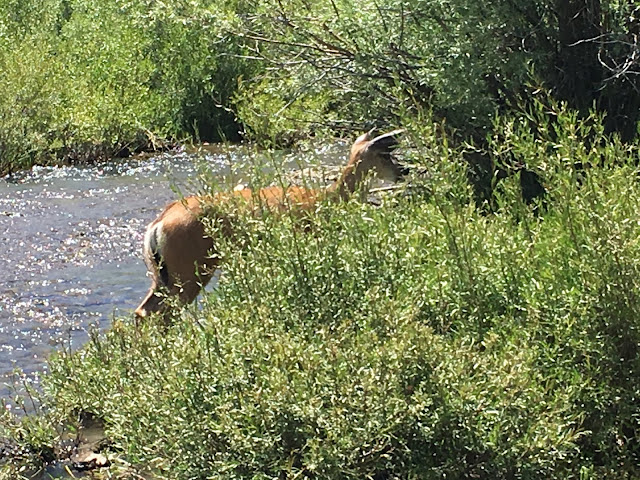 Took to some private land with permission of the landowner to fish a small creek that used to produce some very nice wild fish up to 16 inches in the past.  Spoke with the landowner who has stocked it with some very large triploids.  He will be stocking it with tiger trout stock soon. 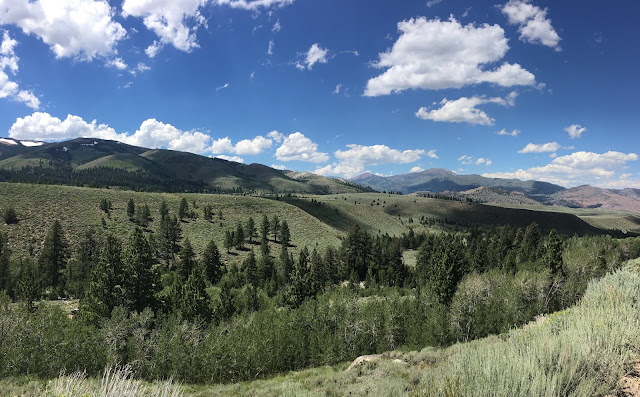 Skipping the stocked section, we ended up getting the skunk though as no fish were willing to come up.  I left my nymphs behind as I've never fished subsurface here.   Friday lightening storms and flash flooding may have had their effect on these fish as the water was glacial and milky. 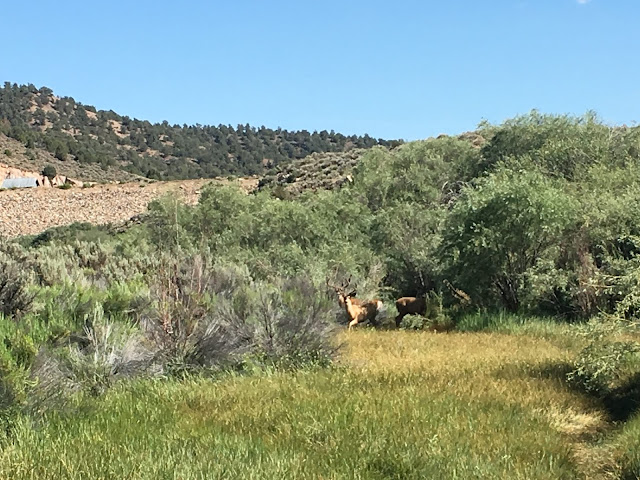 Gave up after a couple hours and headed toward the East Walker after a stream side lunch.  Slow here as well.  I started with nymphs at my favorite hole but it failed to produce. Fished several hours without so much as a bite.   After Kelly gave up I asked for his rod as it was rigged with a hopper and I was too lazy to re-rig my setup.  I took a few casts along the bank and managed a 12 incher to end the skunk.  Quit fishing after that.  Took to a local lake where Kelly's buddy's ashes were placed so he could have a beer with him.  Back to the apartment for dinner. 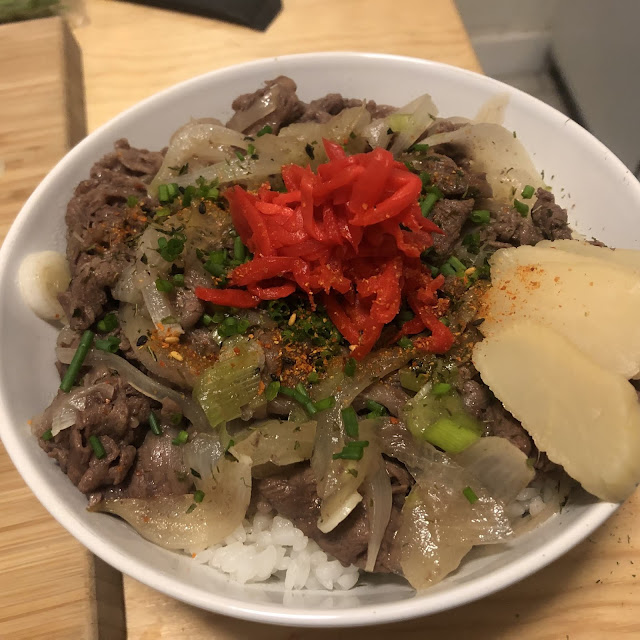 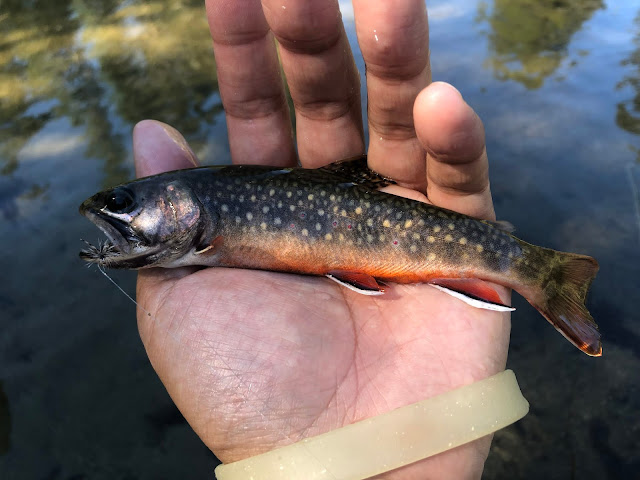 Kelly made a suggestion earlier in the trip about a small creek that is fed by a high altitude lake so on Monday we decided to check it out as it was on the way home.  We checked out the lake once we arrived in the morning.  Fish were rising to mosquitoes.  We went back to the truck to rig up.  I decided to fish my 6 foot two weight as the weekend was filled with small fish and this stream for the most part held small brookies. 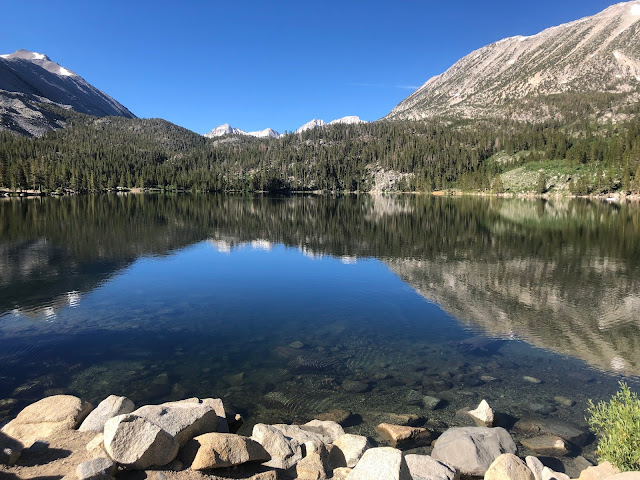 I started at the lake and tied on a mosquito fly and despite a less than ideal rod for the lake I managed one take on one of the few first casts.  It was about 30 feet from the shore and it ran directly down the lake outlet that tunneled below the road.  I had to pull him back out of there.  The nine inch fish popped off while I was about to land him. 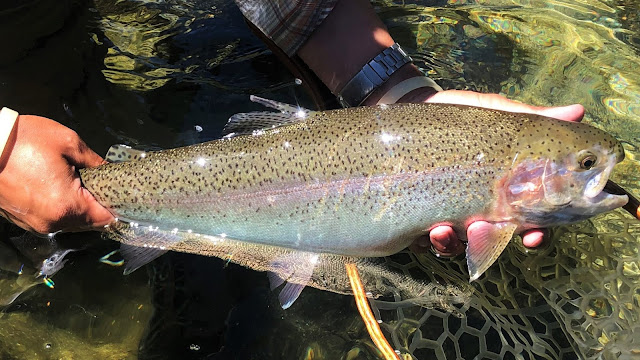 Went to the creek after that and began fishing just below the lake.  It was literally fish after fish.  Mostly brookies but a few rainbows here and there, not any of notable size though with the largest in the 8 inch range.  So we hiked downstream about a quarter mile and began fishing upstream toward the lake.  Fish were easily caught throughout until I came across a start of large slow moving section and noticed several fish in the 12-14 range.  I spent the next 40 minutes trying everything to get one to take.  I even added a two nymph dropper.  Normally I would never do such a thing but my first dropper was two short and rather than cutting it off I just added another.   It proved fruitless though and gave up and fished my way up toward the hole we began the day.  This time Kelly took the side I fished earlier and I took the other side.

I did notice a pod of large fish in a feeding lane.  I casted upstream of them hoping my dry fly would entice them only to have a small brook trout take above the pod.  I tried to line him in without disturbing the bigger fish.  I released the fish and casted upstream but failed to place it where I wanted.  So I recasted rather uglily as the cast collapsed but fell directly where I wanted it so I let ride.  The  fly submerged which I wanted and as it drifted through the feeding lane I lost sight of it but I noticed a fish act as if he took.  Not sure if he took my fly or not I lifted the rod rather unconfidently and a fish was on.  I knew it was a nice fish but had no clue until I managed to get her closer.  She made several great runs and I couldn't do much to her with such a soft light rod but eventually wrangled her in.  She was holdover fish from the lake, fat like a football.  With that it was noon and I quit gave the hole to Kelly and he gave it a shot.  I told him to retie with a nymph.  All he had were wet flies and I told him to go with that.  After a few drifts I told him to add the smallest split shot he had.  It wasn't long until he had a fatty on as well.  Unfortunately his broke off and we decided that was enough as it was just past noon and time to head home for the long drive.
Posted by gourmetsportsman at 3:01 PM