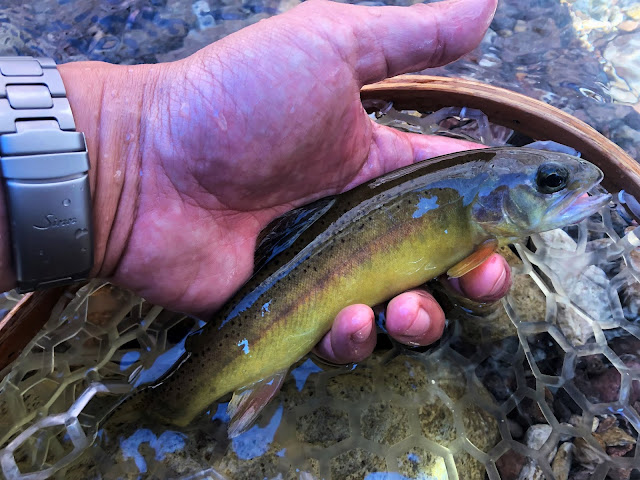 When nightfall arrived we were amazed on how bright the stars were.  All the constellations could be seen quite vividly.  We later found out that we actually camped in a site that was considered one of the darkest places in the states.  It's a common site for those interested in astronomy.  There are even telescope platforms installed for stargazing.  I had no clue about this when I looked for suitable campgrounds in fact we debated even camping here at all since there was a closer campsite to the fishing destination but decided to stay here as we were tired of driving and still had over an hour away from the water. 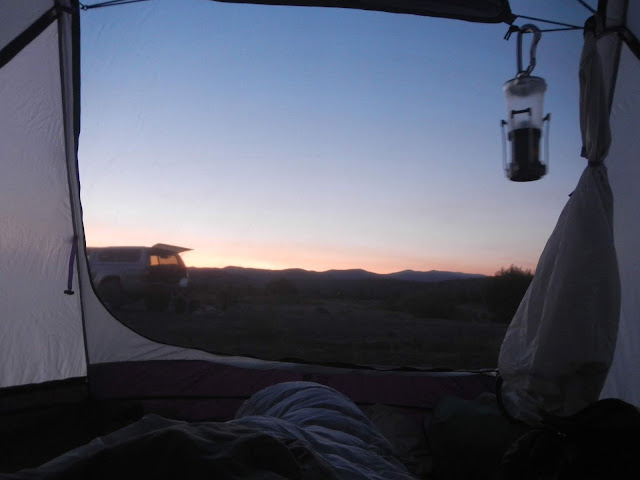 I awoke early around 2 or 3am thinking someone was snooping around my tent.  My hand instinctively reached for my snubnose and I groggily looked through the mesh panels of my tent to see if anyone was near but there was nothing.  I couldn't go back to sleep after that and stayed up watching the sunrise from my foam sleeping pad.  After breakfast it was time to make our journey to our next fishing destination. 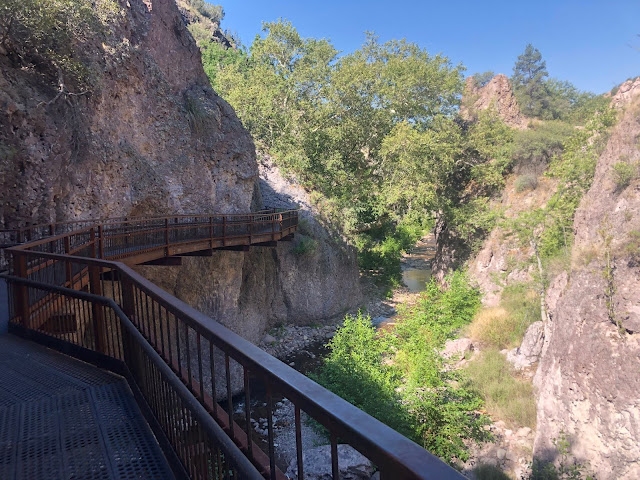 We looked in to Gila Trout fishing in Arizona but after communicating with Ben from AZ Wanderings, he let us know that despite an initial successful restocking of Gilas, the fish did not survive a massive fire a few years ago.  So we looked in New Mexico.  Originally when we planned the Gila portion of the trip I had us at another location, one that we would fish later in the day, but after contacting Curtis and under hiss advise we checked out another.  I'm sure glad we did.  Not only were the fish bigger but the scenery was simply stunning.  Also it is was much easier to get to which we later learned.  I had totally forgotten that Curtis had retired in New Mexico so I'm glad I remembered and also glad he was willing to help us out. 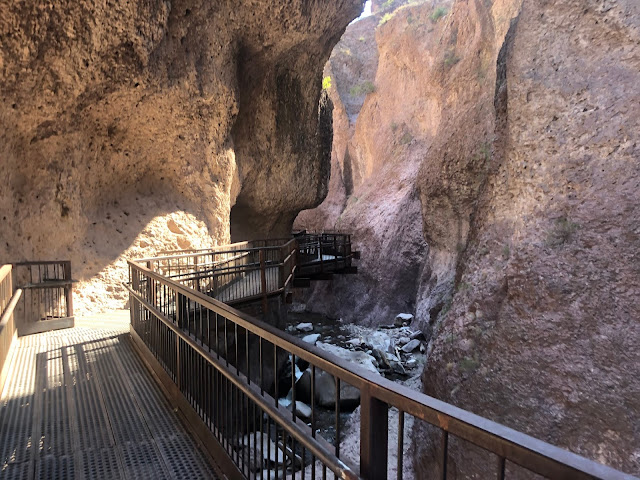 When we got to the parking lot, a park ranger was doing his chores and we chatted him up.  He let us know about the fishing and how there were fish up to 18 inches in this water but he doubted that any were left.  New Mexico allows you to harvest two Gilas in this water and many people do come here and take fish home.  It's a shame but as I'm learning the culture of catch and release in New Mexico is not very prevalent.  After our conversation while rigging our gear, a fly fishermen was coming out and heading toward his car.  We asked him how he did and he said he got a few on a bunny leech under the banks. 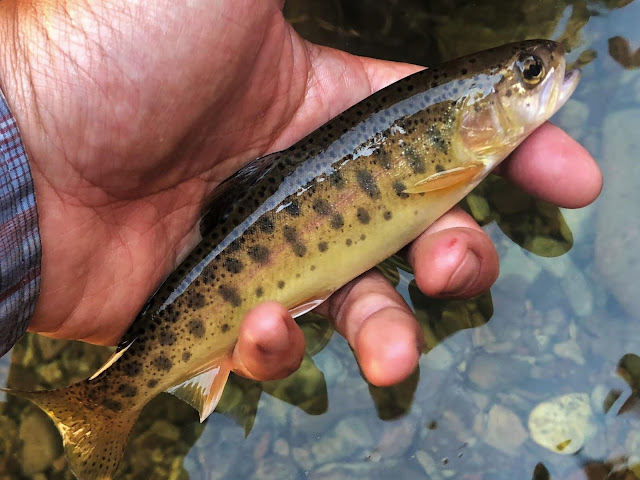 After rigging up we hiked in and not long after I took the first sizable hole and threw my fly out.  Again fishing my favorite dry fly.  On the very first cast I had a take and as set the hook and felt the fish he came off as easily as he came on.  I'd get four more rises before I'd get my first Gila trout to hand.   It would turn out to be the largest of the day, though not very large, and the least colorful.  It's blue parr marks now fading and little terms of spots.  I'd catch a few more in this hole all more vivid that the first before I took to the trail again looking for my buddy Kelly. 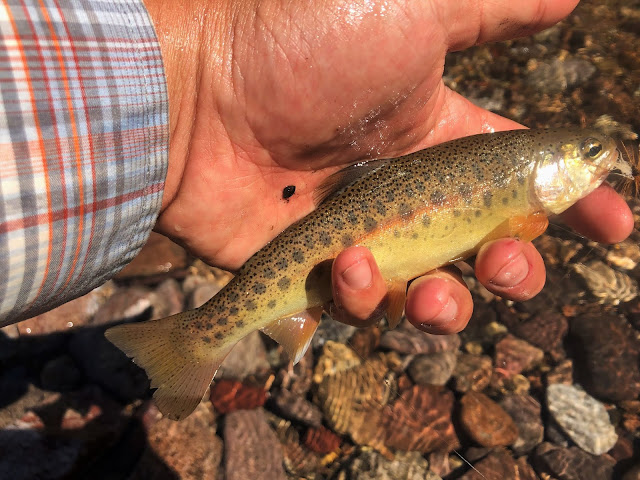 I'd stop at a few holes before I reached him though and each produced fish.  One run was in slot just wide enough for me to slip in if I wanted.  I would have crossed if it weren't for the fact that it was deep.  Beyond the slot was a big pool feed by a small waterfall.  There must have been big fish in there I thought.  Not only was it an ideal feeding location but also somewhat difficult to get into.   It also required you to get wet up to your chest which means those fish were likely unbothered by anglers.  I chose to stay dry and just fish the slot and caught several fish there but my mind kept thinking of the fish that likely awaited for any angler willing to go for  a swim.  I figured I'd try again on the way out as getting wet would keep me cool in the afternoon heat.  Unfortunately when I returned the small pool in front of the boulders were taken by a group of women and so I didn't even bother. 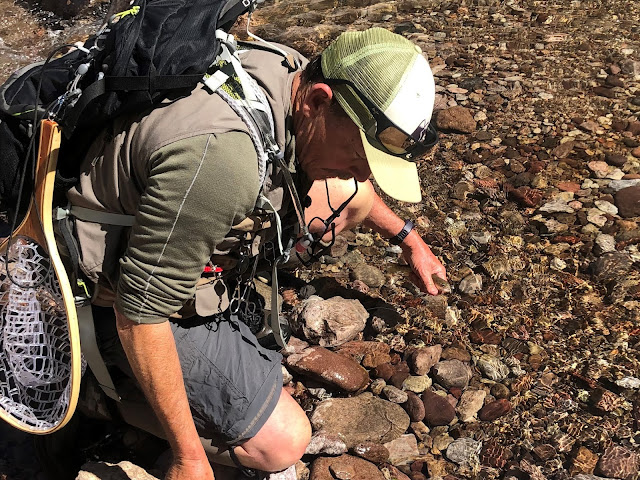 I finally reached Kelly he fishing a "big" pool in front of a small waterfall.  He'd caught a few and was rigging tippet as he'd just broken off.  As a typical A-Hole I took that to mean I could fish his hole.  I caught a few on my dry fly.  On one instance I caught a 6-7 incher and it was chased by a fish at least 15 inches.  Once Kelly was rerigged I gave him his hole back and he proceeded to catch a few more. 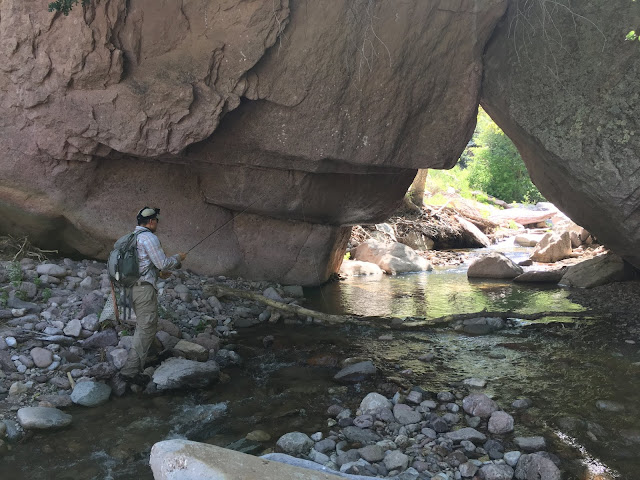 The hole died after that and we moved on upstream after climbing up some large boulders and squeezing through a small tunnel.  We'd catch a few more fish here and there hop scotching one another looking for the next fish. 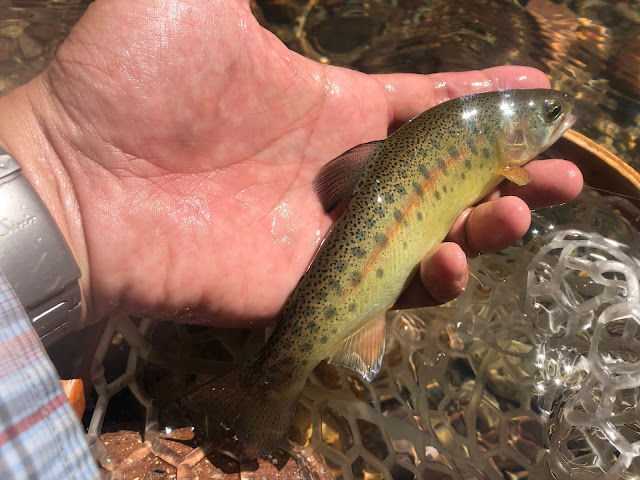 At this point there was no trail and to get any further required some navigating through some nasty terrain and boulder hopping.  So we called it at one hole after it proved very fruitful.  I seemed to get a fish on every cast.  No longer wanting to fight our way upstream we started our way out.  On the way we would return to the hole with the big fish.  After getting a couple with my dry I decided to tie on a chartreuse balanced leech.  It was no long before that hog returned and hit my fly.  I set the hook felt his heft but came unglued not long after that.  Not sure why though. 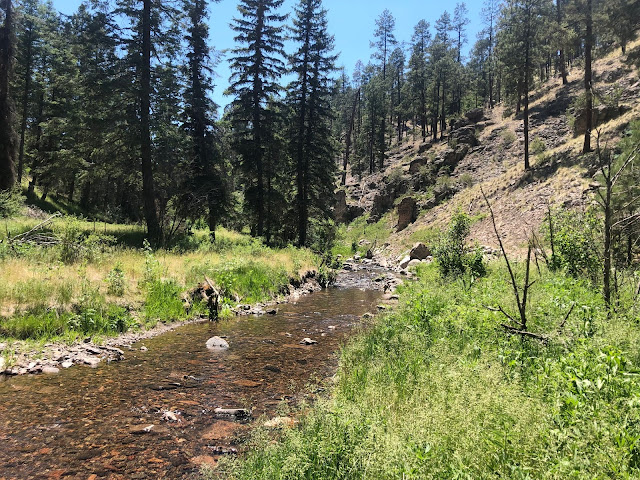 After eating our lunch at the parking lot we began our way to the next Gila spot.  In terms of mileage it wasn't far but the ranger had told us that it would be at least an hour and half drive to get there.  It may have actually been longer and we'd have to climb over the crest to the other side.  The road was not only windy but also narrow.  It was actually quite annoying and even more so when we had to navigate past a UPS truck coming the opposite direction.  We eventually made it to the little creek and fished it for an hour or so before heading out.  The water was skinny and so were the fish.  Most were so small we launched them out of the water as we set the hook. 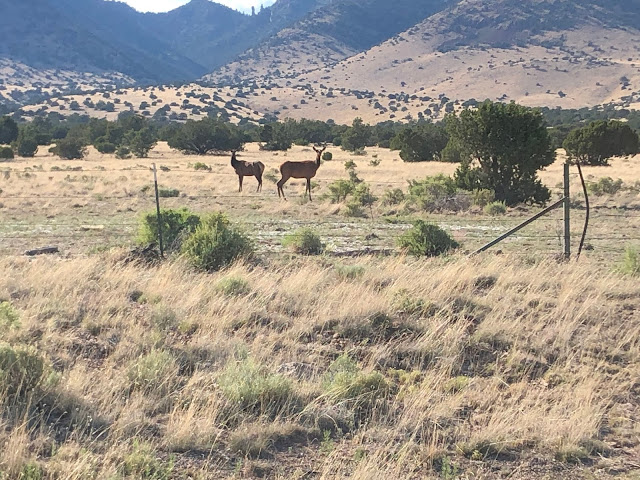 We made our way out and toward Albuquerque.  One thing I discovered is very little cell phone coverage exists in New Mexico and Siri's directions are less than stellar.  I guess whoever does the mapping software for Apple hasn't put New Mexico as a priority.   When we reached a small town I was able to reach Curtis to see if he were free to fish the next day.  Luckily we were able to get a hold of each other as cell reception from there was hit or miss.
Posted by gourmetsportsman at 2:46 PM