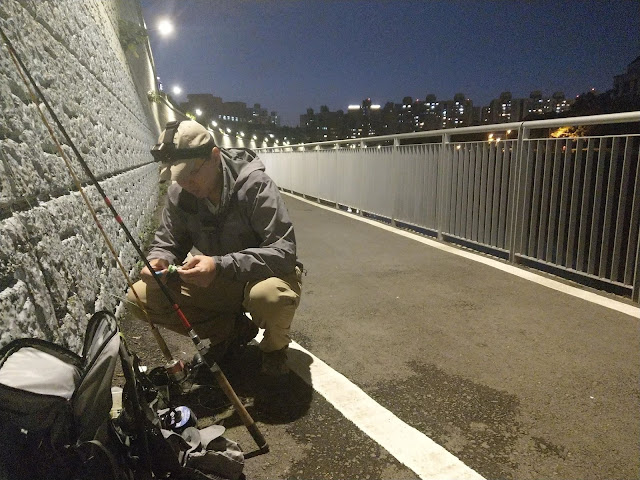 Now back in Taiwan, I hooked up with my friend Peter.  Last year he was kind enough to show me ropes around Taipei.   He tried to get me on a Pacific Tarpon but after two strikes I failed to connect.  This year I had snakehead on my mind and that would be my specific target.  I met Peter at Jingmei station after his work shift at 6:30pm and he was still in a dress shirt, slacks and dress shoes.  Considering we'd be fishing along the filthy banks, you can't say Peter is not fish crazy.  We took to his scooter and rode down the street to the fishing destination. 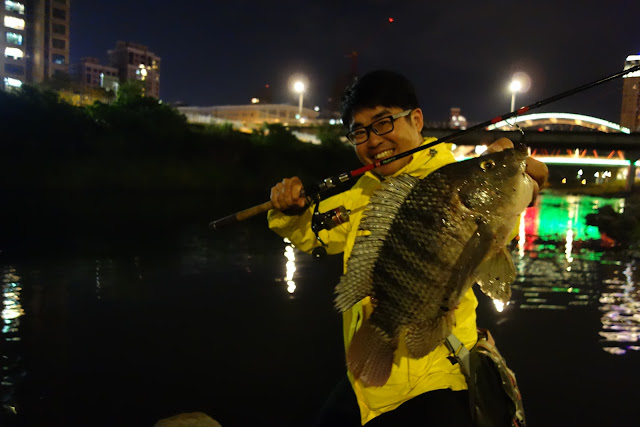 All fish within the city limits are highly pressured.  Fishing then takes not only skill but stealth.  Peter's first suggestion was to fish off the steep concrete bank and cast from there.  A task much easier done with gear than a fly rod.  It was not long that I realized the 7'11" Sage rod with a foam frog popper was not up to the task I need to get closer to the water.  So I did but it didn't help me get any closer to my goal.  When it started to look like the snakehead were not going to cooperate this evening I switched tactics.  I decided to go subsurface.  It was not longer after Peter hooked into a fish, a tilapia, an African import.  I had at least 10-15 bites but could not get any of them to stick for more than a moment or two.  I even had one what Peter called a "big fish" on until it came loose. 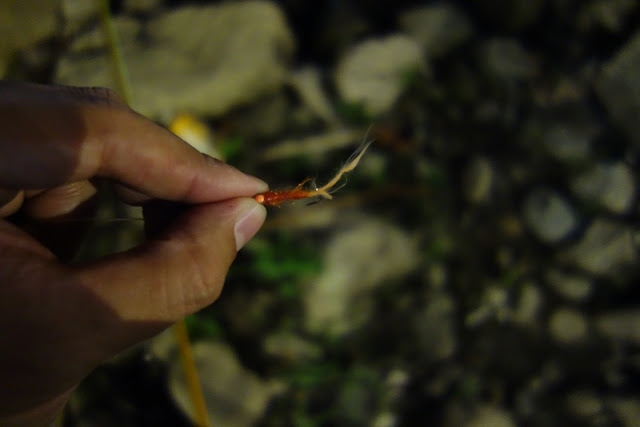 It quite possibly was the snakehead I was looking for.  Then when we moved spots and I managed to hook a tilapia and fought it right at my feet before it popped off and swam away.  Afterwards I checked my fly only to discover that the hook was bent out of shape.  No wonder I was failing to connect.  I moved toward the inlet  that was flushing water into the system and noticed carp clopping.  I've only seen carp clop a couple of times here in the states and yet now I've seen it twice in a row in Asia in two different countries.  Because it was so dark and a bit lazy I didn't bother switching to a dry fly I just floated my wooly bugger on the surface. 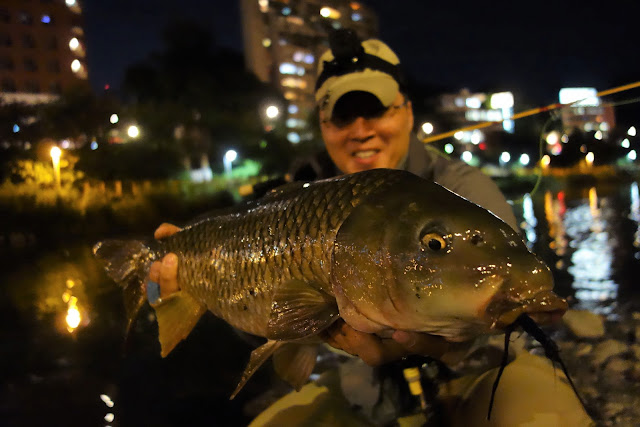 Attempt after attempt it looked as though I wouldn't get my first Taipei fish after all.  Then I finally hooked up on a nice common carp. When I noticed more clopping carp I cut off the streamer and was about to tie on a dry when Peter received a call from the wife. He asked if we could end the night in 10 minutes. I asked him if I got him in trouble. He replied no I only got a "friendly reminder." I know what that means, I told him we could leave and I was satisfied. I finally got a fish in Taipei city which Peter says is extremely difficult since these fish are highly pressured. Even though I've caught hundreds of common carp stateside this one was special. It was my first Taipei fish while not native to the land it was at least an Asian fish in Asia.


Posted by gourmetsportsman at 6:47 PM