April 13, 2018
Tama River runs from Yamanashi 86 miles down through Tokyo and into Tokyo Bay.  In the upper stretches trout dominate whereas closer to the bay in the urban areas bass, carp, ayu, and maruta are found.  Maruta or Far Eastern Dace/Pacific Redfin are anadromous and in the spring they make their up the freshwater rivers to spawn.  And as any spawning fish they are in full color mode of blacks, oranges and whites.   Last year I had intended to fish for them but simply could not find the time.  This year I planned to catch one. 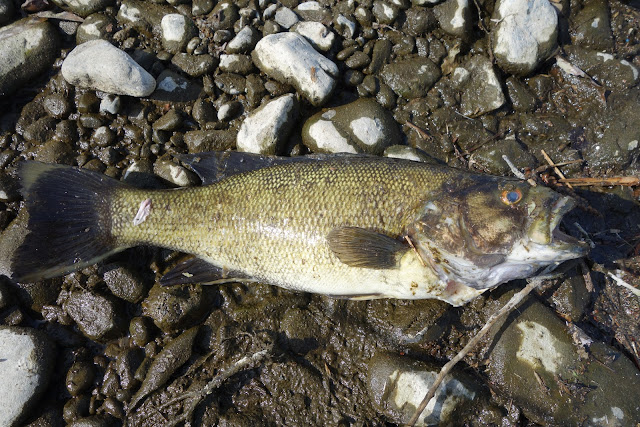 This would be my last full day in Japan before heading back to Taipei.  While maruta was never a primary objective for this trip it was on my radar as a secondary one.  My schedule to fish for them was open for two days only, the Monday I returned from the yamame trip, and the  day before I left Japan.  When I came home from Yamanashi I was too tired to head out and explore the Tama River despite Koji giving me some locations to fish.  So I would wait until Friday.  When I awoke that day at 6am I was debating whether or not to actually head out.  I looked out the window and the winds had already began to pick up.   After packing my luggage and then eating breakfast I left for the train station by 8.  Having only used this particular train station a handful of times years ago, I mistakenly took the wrong platform when my train arrived I realized my error and made my way up the stairs to cross the bridge to the other side.  One thing I soon will realize that it was a costly mistake not only as it cut into my fishing time but this train was only 30% full when the next train came it was already 60% full.  Meaning by the time I reached my destination 11 stops later it was going to be capacity.  By the time I reached my station it was at capacity I could barely exit the train.  I almost didn't make it out but I did and I walked the quarter mile or so to the water. 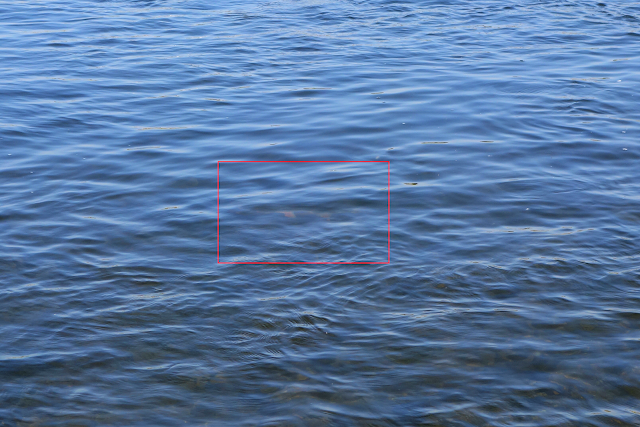 I walked through the field and under the shade of trees I started to rig up and put on my waders.  By now the winds are howling and I now realize that this may be a act of futility armed only with a limp slow action 4 weight.  Desperately I searched the water for any signs of maruta but ripples caused by the winds would make that difficult.  On my first 100 yards I did see a fish cruising the shallows near the bank.  After several feeble attempts to make an accurate cast in the winds I soon realized it was a carp.  So I moved on.  I wanted a maruta and so carp would have to wait.  On my way up I found a dead fish in the shallows, at first I thought it may have been a maruta only to find that it was a fellow American, a smallmouth.  At one point I finally found a maruta (pictured above).  I must have made a hundred casts to him, some fairly decent ones despite the wind) but could not get him to bite.  I switched flies over a dozen times from various egg patterns of different color, size and weights then to streamers.  None entice the fish enough to even consider taking my offerings.  Eventually it moved in the depths and I could no longer track it and I moved on to the dam. 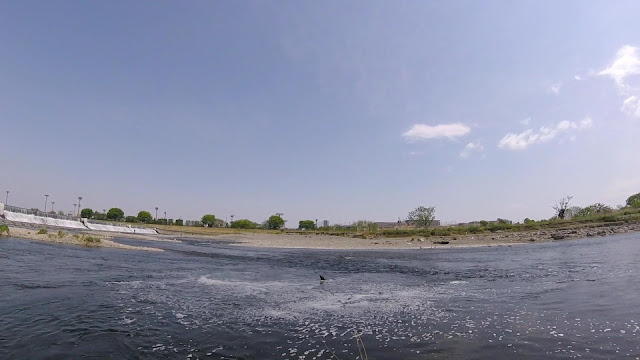 The dam is the end of the line for these spawning fish.  I had no intention of catching bedding fish but I decided to head that way as that was where all the fishermen were located.  I wanted to see if anyone had any luck.  Most of these anglers were ayu fishermen.  Ayu is a Japanese delicacy and once cooked is eat whole, innards and all.  How they are fished is typically using a caught ayu fish that is hooked and baited and thrown into a mix of them.  Since these fish are extremely territorial any fish that enters its territory with be met with a charge.  This how it hooks itself to the baited ayu. 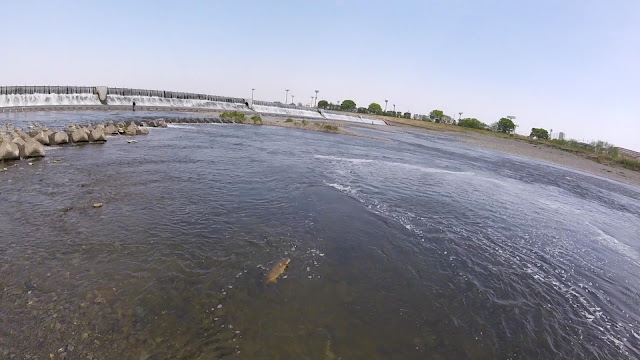 But before I reached these fishermen though I managed to see a pod of clopping carp.  These fish were actively feeding without regard.  I've only seen clopping carp Stateside once before and it was for a very short window.  So I cut off my streamer and tied a black size 14 emerger fly that I hoped that I could see in the white foam line. 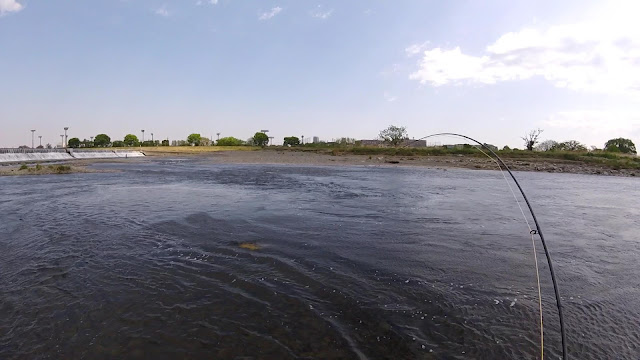 It was not long that I hooked on my first clooper in the over twelve pound range.  After battling it for several minutes and a number of times I nearly netted it it eventually came loose after I got too impatient and tried to pull it too hard.   This would continue three more times, all fish in the ten pound range before I had to call it quits.  Again all of these fish could have been landed easily had I had more appropriate carp gear.  One of my stiffer five weights could have made my life much easier not only with fighting the fish but also casting to it as well. 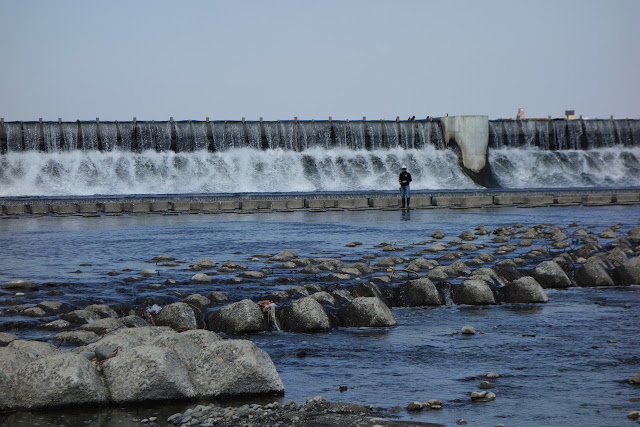 I ended the session at around 11 as I had many things I wanted to do before I fished later that night with Koji at Yokohama Bay for suzuki (Japanese Seabass).  So I made my way back to the shoreline.  While there I watched gear anglers attempt to catch maruta and the group of ayu fishermen patiently waiting for a bite. 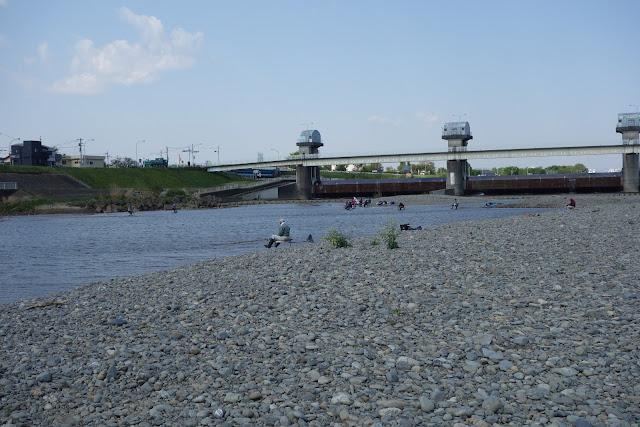 As I was leaving the carp continued to tease me clopping without a care in the world.   I wish I allocated more time to fish here as there were literally hundreds of carp everywhere but it would not be this day.
Posted by gourmetsportsman at 9:05 PM