My trip originated in Taiwan for personal reasons but I was able to jet over to Tokyo for a bit to catch up with old friends, do some sight seeing and of course catch some fish.  I returned to Taiwan, extended my trip a few days so to do some fishing with some new friends in Taipei.  Initially I planned to fish with a fly fishing friend who planned on taking out to Hsinchu to hit up a river to catch some Taiwan Mahseer (or as some call it Holland's Carp though I don't think there is an official common western name).
Due to foul weather we were forced to cancel that trip which is quite unfortunate as that was the particular species I had really wanted to target in Taiwan.  Also the fishing would have been in the solitude of nature rather than the hustle and bustle of the city.  But that is life and that is fishing.
So instead I hooked up with Peter at Fishing-Traveler, a fishing exchange program.  They show foreign anglers the ropes in Taiwan, in exchange when they travel to your country they expect you do the same.  Pretty cool concept actually.  So if these boys show up in SoCal I'll have to figure out where to take them.  Unlike Donny though they did not fly fish.  So I was on my own to figure it out.  I asked them about their terminal tackle and tried to imitate it with a fly.  We set out for African catfish, Indo-Pacific tarpon, and snakehead.  When we arrived at the river in the outskirts of Taipei I could see fish rising all over.  Fearless.  They could care less about people. Peter told me those were junk fish.  No one in Taiwan ever fishes for them.  "Garbage" he called them.  He didn't know what they were called in English at the time.  Later he facebooked me the name suckermouth catfish.  Whatever they were I wanted one.  I casted a dry fly billion time in the hopes one would take.  I left my box with small flies at my grandma's, thinking I wouldn't need them.  How I was wrong.  I couldn't tell what they were taking but it was tiny.

I gave up on them as I didn't have the proper size flies to attract them.  Since Peter was using a popper lure I decided to try the same in fly format.  I was fishing from an elevated position and the current of the river was somewhat swift so getting the popper to properly pop was difficult.  So I switched to a flashy rattle eye clouser.  I managed to get two Indo Pacific tarpons to attack my fly but I failed to get a good hookset on either.  My chance of catching a fishing in Taiwan was dwindling quickly as more anglers started to arrive at our spot.  After a while we left and decided to try a nearby spot that held snakeheads.  I retied a popper and we scootered 10 minutes away.
Our approach needed to silent as these fish were extremely spooky.  My first cast I hooked into some weeds and had to hand line all that garbage back to me.  We went up and down this canal but managed no fish.  My Taiwan mission was a bust.   Peter apologized to me but I told him there's no need.  It's fishing nothing you can do but try. 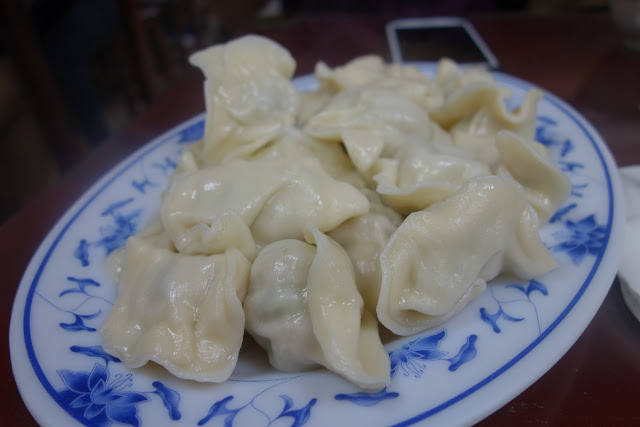 Peter refused to let me treat him to dinner and he took me to the best dumpling house in Donghu.  He said most likely there will be a long queue.  Fortunately there was not and we only needed to wait a breif moment before getting a seat.  Thanks Peter for everything.  I'll be back for sure as I have unfinished business here.
Posted by gourmetsportsman at 2:37 AM