With the alarm set at 2:50am, I awoke and prepared myself before driving to Chul's place.  After unloading my gear into his truck, we headed north toward snowbow country.  Having only 2 hours of sleep I was in zombie mode but was filled with anticipation.  Fearing the weather might have closed down the 395 we had postponed the trip one day.  Those fears were unwarranted as local guiding service reported an epic day on the water so we decided to head up. 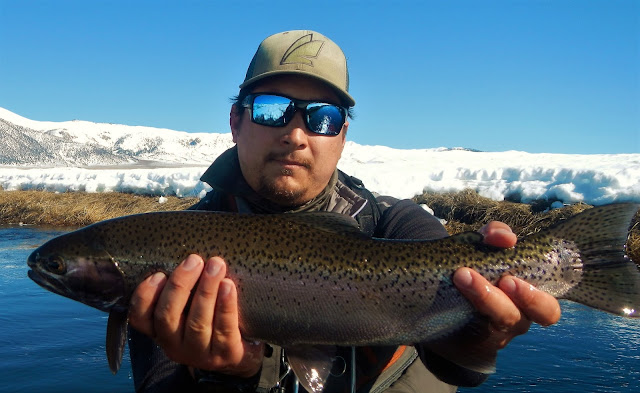 After the disappointing breakfast at Jack's, I made it a point to ask some of my fellow fly fishermen on breakfast recommendations around town.  Most pointed me to the Village Cafe so we tried it.  As with the last time we were to forego a proper lunch on the water and so we ordered a heavy meal.  I would try the chicken fired steak and Chul order the pork chop special.  The meal was much better than our previous trip.  With bellies full, we rigged up at the parking lot thinking it would be too cold at the parking lot on the water. 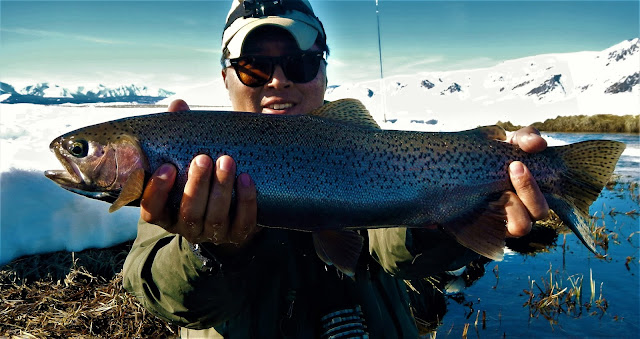 Within half an hour or so we were trekking in the snow.  The snow was crunchy and packed but we would still fall in a foot or so deep in some areas despite the aid of our snowshoes.  It was not long before I hooked up on my first fish but came unglued.  And then another after moving up a few yards.  That too came unglued.  Originally I thought these fish were 12 inch class fish as they look smaller in the water but after looking at some of the fish we caught later in the day I believe these two were most likely in the 14 inch range plus or minus an inch. 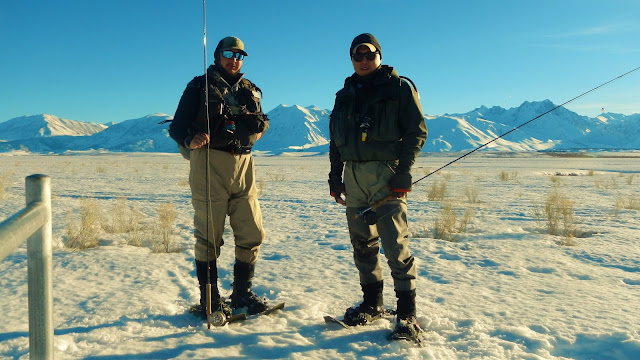 Chul was the first to land a fish.  A solid fish.  It could have been a disaster.  As I came up to it with the net from behind, the fish surged past me to the right.  The leader now scraping me right shoulder.  Normally moving out of the way is not a problem but while wading in moderate speed high shin deep water with a soft soil all the while in snowshoes, mobility is not that easy.  No worries though as the fish was landed shortly thereafter. 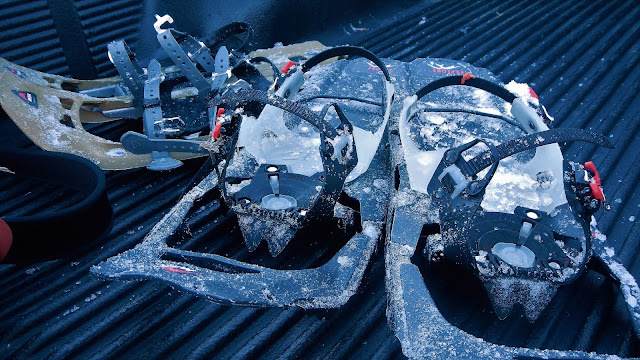 I would lose another fish before finally hooking up on mine.  I did not lose any fish from break offs each one simply spit out the hook.  We would fish a few holes further upstream, the glory hole and the last whole we fished last time (where we took three fish).  No fish were taken this time though.  I believe these holes were thoroughly worked over by the group of four that were ahead of us.  With that we quit for the day and headed back to our truck. 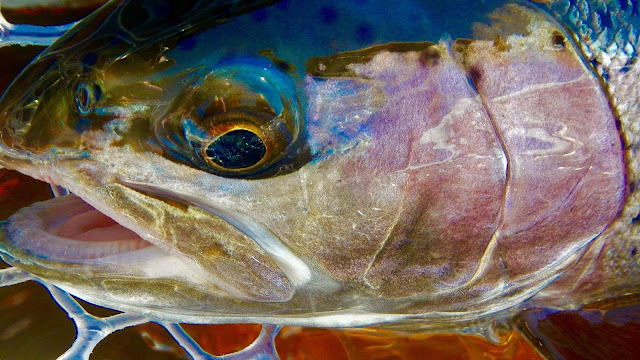 We had originally planned headed home after dinner but after some serious consideration and knowing a new storm was on the way by week's end, it did not take long for us to come to the conclusion we should spend the night and fish the next day.  Having only packed for a day trip, we headed to the store to stock up on some supplies before making it to a motel. 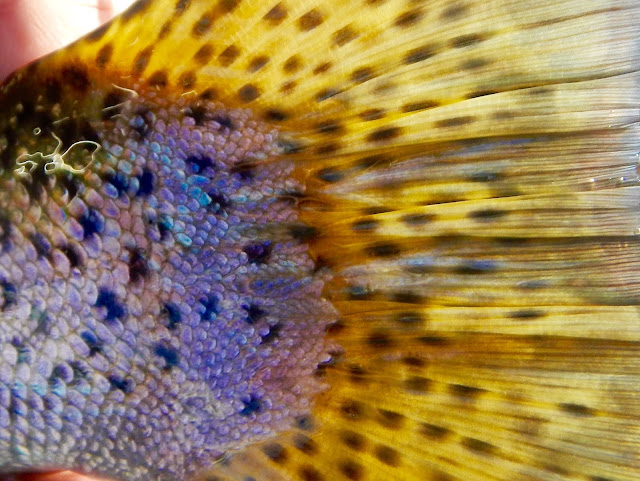 As tired as I was, snowshoeing all day with little to no sleep, I had a hard time sleeping.  Or should I say staying asleep.  I awoke around 2:20am to use the head and couldn't go back to sleep.  Chul awoke a couple hours later.  This is same time he normally awakens for work.  After hours of waiting for some place to open for breakfast we headed out.  The original plan was hit up Mahogany Meats for a breakfast burrito (another recommendation ) but they did not open until 7:00 so we headed across the street back to Village Cafe.  They too did not open until the same time.  We had 40 minutes to kill so we headed to Schat's for some bread and pastries.  We ordered something to hold us over and waited for the restaurants to open for a proper breakfast.  As with the day before we needed a proper meal to sustain us throughout the day and a chocolate croissant would not be sufficient to carry us until dinner.  At 7 we headed to Mahogany's but they were still not open.  Not wanting to wait any longer we headed to Village.  This time I would try the pork chile verde, something I was debating the day before.  It was quite good better than the chicken fried steak.

We did not suit up at the restaurant as we did the day prior as it was warmer than we had anticipated.  Yesterday The sun made it quite warm we actually were shedding layers.  Despite being warm we could still see our breath throughout the day.  It was supposed to be cloudy this day so the thought was it would be colder and feel more like Hoth.  With that in mind we packed extra layers in a waterproof Patagonia bag I borrowed from my buddy Joel the day prior to this trip.  Got a parking ticket in the process.  I hate beach cities. 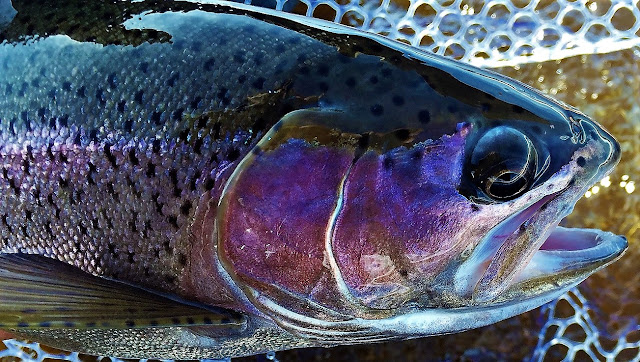 The day was colder than the last but the fishing hot.  I would end up coming unglued on four more fish, one small (12-13 inches) and the others legit.  One of which was in the 20 plus class who gave me a nice couple runs and a jump.  I know how I lost that one.  I was being foolish for some reason.  Maybe lack of sleep or just being to impatient or just frustrated from losing all the others.  I discussed via text my plight with Luc and he made some suggestions on fighting these fish.  Always good to hear what he has to say so I'll remember those words for the next time. 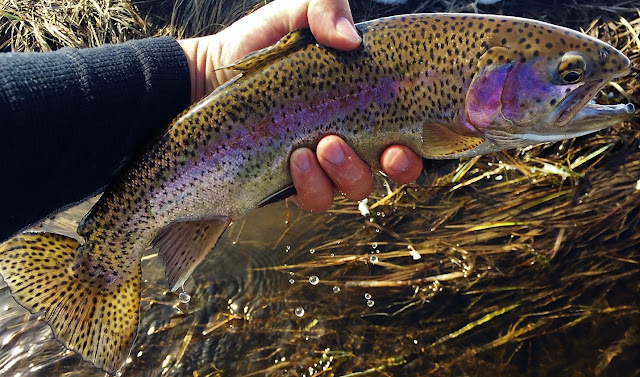 I did manage one for the day to hand quite early but it was a dink for this water.  The fish was a Lower O sized fish.  Nothing to get excited about here.  Chul did quite well and managed his share.  The fish were smaller this day than the last but all pretty.  We left earlier this time as we needed to get back home at a reasonable hour.  After coming unglued on three at one hole I knew it was not my day and time to head back.  We picked up sandwiches at Mahogany's and headed for the long trip home.  On the way home we got stuck behind a wide-load convoy after Kramer Junction.  I checked for alternative route to bypass it.  I found one through Silver Lakes.  This had to be the least direct route to get to the 15.  Who the hell designed this place?  After navigating through we made it on the freeway.  I joked we made it on the freeway and we'll still going to get stuck behind that convoy.  Sure enough when we reached the 395 the convoy was ahead of us.  Luckily the CHP allowed cars to pass it this time since the freeway has multiple lane.  Lost seven most in the 17 plus range.  Not a bad trip all in all if only I didn't muck it up.  Will be back.
Posted by gourmetsportsman at 10:31 AM