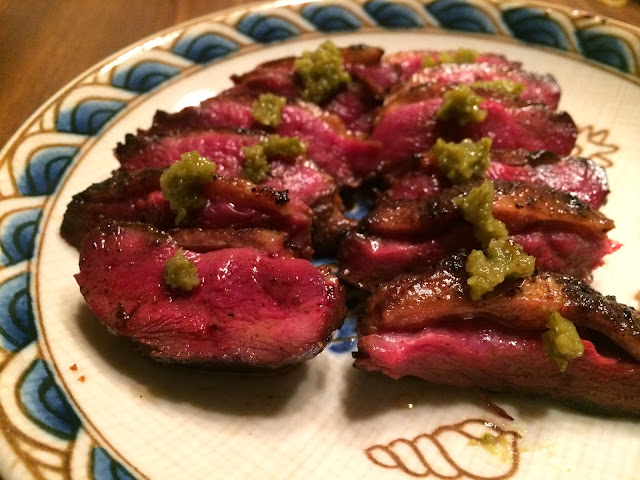 On our last hunt Ed and I shot at the same shoveler at the exact same time.  Since spoonies aren't exactly known for their table fare, I had no problem offering it to him.  He refused and let me have it.  I'm sure if we shot a pintail we'd have a harder time deciding who was going to keep it.  Having never taken a "Hollywood mallard" I was skeptical on how it was going to taste.

So I decided to marinate it in Japanese barbecue sauce, Ohgon No Aji-medium hot, since it is sweet and mildly spiced so it should at least mask any fishiness present if this puddle duck has been feeding on anything other than plant life.  I cut a piece of fat near it's rear and heated it in the fry pan to see if there was any fishy smell.  There was not.  So far so good.  Had it been smelly I would have removed any fat or skin and cooked just the meat. 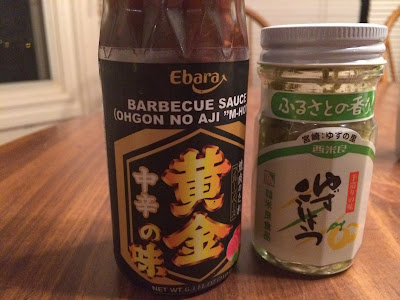 After marinating in the barbecue sauce for the afternoon, I cooked the breasts on medium low heat to a medium rare temperature.  I then topped it with yuzukoshō, which is a Japanese condiment made from the yuzu citrus and chilli peppers.  I figured if there were anything off tasting these two seasonings should at least cover it up.  In this case it was not needed the duck was excellent.

I examined the gizzard as I cleaned it and it was full of seed along with grit of course.  This and the fact that this bird seemed very young was the likely reason that this bird came out so tasty.
Posted by gourmetsportsman at 6:35 PM