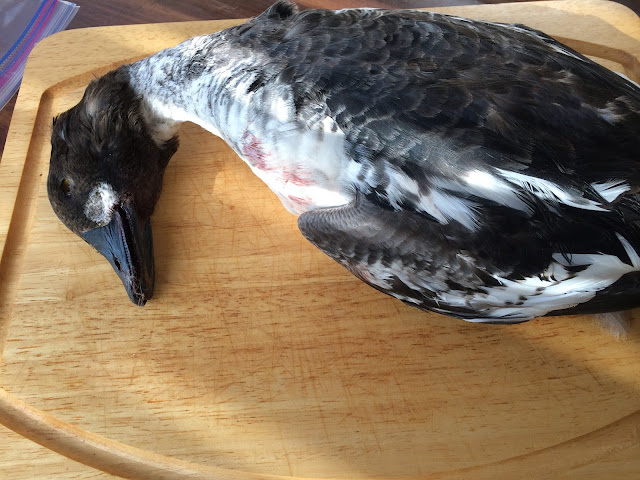 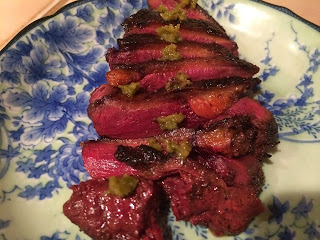 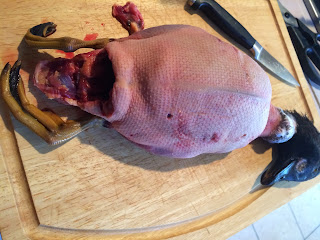 I'm an upland hunter at heart.  I prefer hunting quail and chuckar in the high deserts of the west but since the upland season has been so dismal the past years I have switched my focus to waterfowling as you probably can tell if you're a regular reader.  While I've been hunting for years, I really haven't taken that many variety of duck species.  Therefore I have not eaten all the duck species.  I generally have to go by what people tell me (I don't always trust it as many of these people have crap palates) or what I read in books or the web.

I've been told goldeneyes are not edible and taste like garbage.  I've taken bufflehead and I tried cooking it and it was inedible.  I threw it out after one bite.  I would have given it to the dog if I had not cooked it in wine (grapes being hazardous to canines).  So I was a bit worried for this diving duck.  Few days ago I decided to try it out.  I plucked it and as I did with the spoonie I cut a piece of the rear end of and fried it in a hot pan, smelling it to see if it was off or fishy.  It did have a slight fishiness but not too bad.

So I decided to leave the skin on and butcher it and cook it the same way I did my spoonie.  While it was not as good as the spoonie, it was edible.  In fact it wasn't half bad.  A few things I believe, marinating the bird in Japanese BBQ sauce helps a lot.  First when you cook it, the marinade caramelizes.  As a result the natural sweetness of the duck becomes sweeter.  Second any fishiness that is present is masked with the sweet and spicy  flavors of the Ohgon No Aji.  If it the state is still too strong the addition of  yuzukoshō also helps as it is strong with spicy, salty and tangy flavors.

One thing I must mention is cooking the bird rare to medium rare helps keeping the duck (or any duck for that matter) from becoming too gamey.  One note I did notice was that texturally this goldeneye was softer than other ducks.  It was more filet mignon (texturally that is) than it was New York strip which I find more common with other ducks.  So are goldeneyes edible?  This duck was.
Posted by gourmetsportsman at 11:35 PM