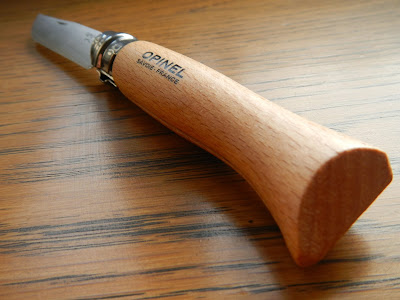 After years and years I have finally picked up a Opinel knife.  I was first introduced to these knives over a decade ago when I was browsing the kitchen tools bins at my local Williams Sonoma.  For whatever reason I never bought the knife then on the spot. I have now rectified that mistake. 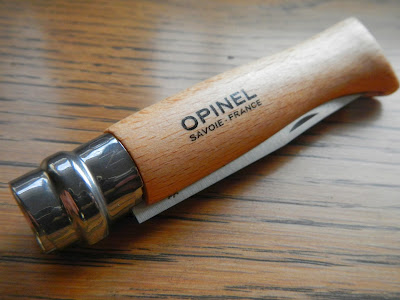 The Opinel is simple knife from France synonymous with French culture and style.  Opinel's have a long history, invented in 1890 as a peasant's knife, the knife now has reached iconic status.  Pablo Picasso used an Opinel knife for carving sculptures.  In America it is referred to as "The French Knife."  In 1985 the Victoria and Albert Museum in London selected it as part of an exhibit for the “100 most beautiful products in the world", alongside the Porsche 911.  The New York Museum of Modern Art (MOMA) also selected it as a design masterpiece.
Construction is simple and quite ingenious.  Only five components are needed to make this knife, the blade, wooden handle, clamping band, stainless pivot pin, and the locking collar.  The knife can be locked closed or open.
Handle materials range from wood to bone to plastics.  The traditional is beechwood. This wood is lightely finished and so is susceptible to humidity conditions resulting in difficulty in opening.  Many modify their knives unnecessarily.  The handle is designed for the "Coup du Savoyard," or "Savoie strike," which is a technique used to releasing a tight blade.  If you hold the knife in reverse with the blade opening facing outward, smack the lower extended portion of the handle against a hard surface.  Doing so will jar the blade out.
While inexpensive this knife is hardly cheap.  I have chosen a stainless blade (carbon blades are available) which is made of Sandvik 12C27M which is the same steel as other higher end blades are made such as my Laguiole.  Opinels come in various sizes and numbered from smallest to largest.   Locking mechanism are standard for all models above number 6. 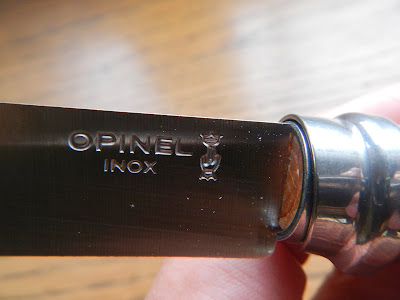 This maybe a beater knife but that does not mean this knife is garbage.  These knives can be found on the internet for less than what you pay for lunch, as little as $8 a piece.  It's lightweight nature makes this a good backpacking knife.  If you lose it or misplace it, they are easily replaceable. 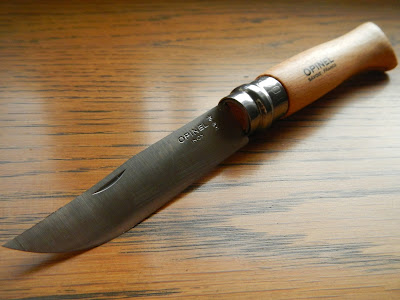 If you have a penchant for wood carving the handles make excellent canvasses.  Many even use Opinels to carve into another.  Here are an example of what can be done by a skilled artisan that was available here:

I need to learn wood carving because that is some cool stuff.


Posted by gourmetsportsman at 4:20 PM