Friday, November 1
I got an invitation a couple weeks ago to hit up the Owens Valley as Tuck had access to a condo in the Mammoth area.  I debated up to the last minute whether I wanted to head up before the group and hunt ducks with Kaiser.  I choose against it since I didn't want Kaiser messing up the condo since he'd be dirty from hunting all day.  So I decided to leave him home and leave with the group on Friday.  The thought of hunting without my dog is something I need not explain to gundog owners.  But since this trip was to be more a cast trip than a blast trip, I sucked it up and reluctantly left the dog with the folks.

Before Tuck arrived at my house and in need of a haircut , I went to the barber shop.  When I arrived I noticed my regular barber was not working.  I debated whether I should let another barber cut my hair.  Knowing I would not have enough time or likely the energy to get a cut  before my meeting on Monday I choose to let a Chong (from Cheech and Chong) lookalike cut my hair.  Bad decision. Note to self do not let anyone else but your regular barber cut your hair.  I knew that but I risked it anyhow.

After cursing myself for not just waiting until Monday, I went back home to get ready for the trip.  I rigged up all my rods the night before and placed them in the Rod mount.  I decided to remove one of my reels and replace it with another that was lined with a better line for nymphing.  When I tried to remove it, my reel seat came apart.  Son-of-a-bitch.  I built this Sage 5 weight XP years ago and I love it for my nymphing rod in the Sierras.  I could have epoxied it and let it cure during the 5 hour drive and throughout the night.  But I was worried since the Mammoth area evening temperatures were in the low 30s, it might not cure all the way in time.  My favorite T&T 5 weight would be rigged for streamers so I replaced the XP with my Sage DS2.  I was not too happy about it.

Tuck finally arrived and we set forth on our trip.  Chul and Erika had already made their way about 40 minutes before us.  We met up later for lunch and Chul was not in a good mood as Erika had left her purse at home and they had to turn back 20 minutes into the trip.  More bad luck.  It worked out though as we were able to reach a lunch stop roughly at the same time. 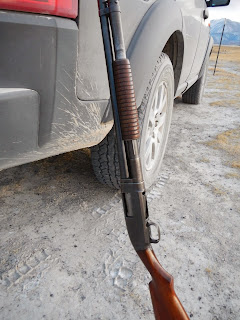 Arrived on the river at 4:30 with about hour of light.  The Tuck, Chul , and Erika rigged to fish while I set up to go after ducks.  After only 5 minutes of walking I flushed a covey of 30 quail.  I thought of taking a shot but decided against it since I had $3/round number 4 tungsten shot loaded in my Model 12.  Too expensive for quail and too big a shot.  Also I was only a few yards from the river and if there were any ducks loafing on the water I did not want to tip them off.  I was right when I reached the water I looked downstream hiding behind cover I saw a group of about 8 or 12 loafing in the water.  I peeled back to circle them to intercept them.  In my hast I must have made too much noise as I heard them flush off the water only to see them fly off out of shotgun range.   I continued downstream and a few bends over a group of four flew off.  After seeing that I knew I would have to walk quite a bit before I would see another duck so  I head back to the truck.  On the way I saw three mallards fly in my direction.  I kneeled down and watched, they came within 40 yards and I took a shot at them.  Probably not wise at $3 a shot but in my excitement I took the shot.
Questioning myself for taking a foolish shot I headed back to the group.  When I got back to the truck I asked how they did and Chul had a carp on but lost it.  Chul did tell me there was about 5 ducks at the bend where we had parked.  Figures.  I hike a half a mile and all I could have done was walk 50 yards to see ducks.  I unloaded and while we stood there watching the river while Tuck was finishing a cigarette, three more mallards few directly overhead within shotgun range.  Of course my shotgun was already disassembled and in the truck by then. ﻿﻿

We headed to Mammoth where we had a rather unimpressive dinner that would last in my stomach even as I write this post.  How the hell do you screw up fish and chips?  More bad luck.  After we were off to the condo for a well need rest.  Hopefully the next day would pan out better.
Posted by gourmetsportsman at 10:03 AM