We awoke in the morning, with the sun starting poke through the mountains.  I was not sure what to expect. After a poor water year I stopped hunting quail pretty early last year and focused on ducks so with even a drier year this year I didn't expect too much but tried to stay optimistic.
I intentionally camped within hearing distance of a nearby roosting area in the hopes of hearing some quail calling in the morning.  When we awoke it was dead silent.  After I broke down camp and set up for the hunt we were off in the direction near the roosting area.  We worked the draw as this is highway for the birds to water.  I saw no sign of tracks.  Kaiser worked hard looking for game but we moved out of the draw to the field.   Reaching the next draw, we entered with hopes of busting a few. 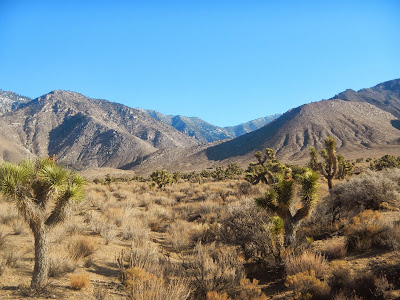 All we saw was a cottontail that I had no shot as once I saw it, it ran into the thick stuff and was lost.  We climbed out of the draw into the fields and Kaiser would go birdy moving from air scenting to ground scenting but would lose the trail after a while.  Eventually he found a single that wild flushed 60 yards away.  No shot and I marked where it landed.  It went back into the draw we just exited.  We gave chase and I hoped the bird landed high into the draw so we worked the top side of it with no luck.  I had no intention of reentering the depths of the draw again and gave up the chase and moved on.   After what seemed like an eternity of hiking another single, a male, flushed wild.  This time I was able to take the shot but missed with both barrels.  I marked where it landed and we made chase never to find it again.
At this time I started to sweep back to the truck.  We ran into two jacks and I chose not to take the shot as I already had a jack and didn't want to hump it the next 3miles or so back to camp.  I made it to the draw and I was hearing the beep of an e-collar but couldn't see the dog anywhere.  Eventually I saw the two dogs working, an English pointer and a setter.  I looked around for the owner and finally saw him.  I called out to him to let him know where I was and waved.  He waved back and let me know I was there.  We met up and chatted a bit.  He had saw nothing yet I told him of the pair of singles I saw.  I noticed he was carrying a side by side hammer gun and asked to see it.  It was a Purdey Island Lock!  If I recall he said it was from 1877.  You don't see too many side by side in the field, at least I don't.  We traded guns so we could inspect each of them, I asked if I could take a picture and he obliged.  We said our "good lucks" and I told him f the area I didn't hunt yet and that he might want to try it.  Later I heard a single shot in the direction of where I left him so maybe he had a gotten one.
We left each other and I made it into the draw where a row of cottonwoods were, as I was struggling to make my way up the high embankment five quail flushed.  My gun was broken as I was trying to get up the wall I had to quickly snap the gun back together and took a shot.  I managed to take one and it fell into a thick area of high grass, broken branches and other natural garbage.  In reality when I look back on it, I shouldn't have taken the shot.  First it was too thick to make a retrieve despite our efforts to, but also it was a small covey and since the birds are struggling I should have just let them go and hoped they repopulate this season assuming they made it.
Low on water, we quit and headed to the truck.  The field was loaded with trucks I'm not sure if all of them were hunters but I saw at least 10 trucks!  So I decided to see how one of my honeyholes, "The G-Spot", and rove to it but before I made sure to pick up some water at the local country store.
The G has always produced nice coveys even in bad years.  Most likely because this spot is known by a few and usually only by locals.  We hunted for hours, searching and searching.  I saw no sign of any birds.

After several hours of hard work we began making our way back.  In a small draw we spooked what I initially though was a cottontail and as I drew my bead on it and fired, I then realized it was a jack.  I didn't intend on taking another jack.  As Kaiser handed it back to me we made a few steps and this time a cottontail emerged.  I took it, hitting him in the head taking both eyes out.  It was not a pretty sight but life and death can be ugly at times.
By this time we were done with the G-Spot and I wondered if any of those birds made it through the tough times.  There were a few nearby spots and when I reached them I choose not to take those roads.  I was in no mood to off road, even if they were easy trails so I headed to another great area on the way home.  Last year parts of this area were started to be posted with No Trespassing signs.  The area I hunted in the past is public but you need to cross through private land .  All the roads now are posted and there is no easy way to enter the hot spots anymore.  I headed home and asked my new iphone if there was any traffic in (hel)L.A. and showed no traffic.  Shocking.  No traffic on a Sunday at a time when everyone is making their way home from the weekend.  I decided to trust the iphone and take the 5 home.  No traffic my ass.  Siri, you lying whore.
On the drive home Kaiser would whimper every so often, I'd pull over and see what the fuss was about but couldn't tell what was wrong.  As I made it home Kaiser was slow to get out of the kennel.  I figured he was just too tired.  I lifted him out and placed him on the ground and left him relieve himself.  He was slow moving and he limped, crying as he walked.  After hearing him whimper and crying I decided to get him checked out.  He showed no sign of injury all day so I was shocked.  I spent about an hour at the vet's and they don't believe he broke anything but they were unsure since the shoulder is the toughest area to x-ray.  The vet believes it must be a torn muscle or a sprain.  I was given some anti-inflammatories and pain killers.  The dog is out of commission for at least a month not counting recovery time.  That most likely means Kaiser is out for the whole hunting season.  We may get the last few weeks but that's it.  I'll have to look at some of the nearby states that have their season's end in February and see if we can get a hunt there.  This sucks.  Obviously the Thanksgiving hunt I had planned is now off.
Posted by gourmetsportsman at 10:08 AM

Email ThisBlogThis!Share to TwitterShare to FacebookShare to Pinterest
Labels: drahthaar, fine shotgun, Food, Merkel, side by side, Sierras, wingshooting