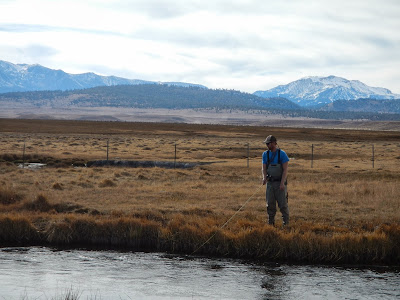 Day 2: November 2, First Full Day
This weekend was a partial work weekend for Tuck so we left him in the morning at the condo while we headed off to the Upper.  Before we left, I remembered that Tuck told me he thought he may have left his fishing license in his saltwater bag.  So he checked his waist pack and after pulling out 15 different expired fishing licenses from several different states, he realized he didn't have the one he needed.  Way to go buddy you have a card deck full of license and not one of them makes you legal in this state.  More bad luck.  He debated whether or not to go rogue and risk it.  I told him the local warden is not a pushover and he could get a duplicate for something like $5 and he rightfully agreed.
﻿ 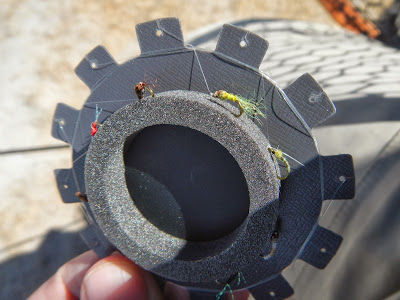 After leaving Tuck, we made it to the river.   As with any blue ribbon stream, the river was already stating to crowd before we got there.  After finding a stretch that appeared to be somewhat free of fishermen, we made our way to the river.  I rigged two rods, a tandem nymph rig and another with a streamer.  I never had any luck with streamers for trout in a river.  When I met a member of a local forum during a fly tying night in the summer, he was showing me all the Sierra hogs he pulled out of various rivers with a streamer.  So I wanted to give it a shot despite the fact I have little to no confidence in what I am doing.  Since Chul has also had success with it also I could see what he was doing and try and mimic his technique.﻿
﻿ 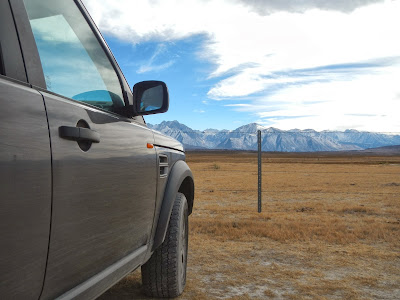 I never had much love for the Upper and this day didn't change my mind.  Time passed and I didn't have so much as grab.  Chul was the first to get on fish and decided to try his luck at streamers.  He managed a few using the dip and strip method, stripping the fly through the undercuts.  Being as shallow and clear the river was, he could see the fish come out and attack the fly.  By lunchtime Tuck made it to us and he rigged after telling me his duplicate license cost him $16.  I was shocked but I didn't realize he was still paying for and out-of-state resident fees.  He had gotten some insider scoop at the fly shop and it was contrary to what Chul taught were the regulations.   Tuck was told the to fish the lake to monument.  Chul had taught all that section was already closed off for the season. 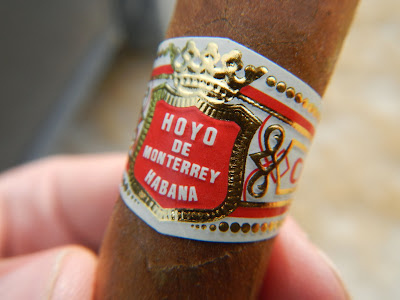 After a streamside lunch and cigar, we waited for Tuck to rig up and we headed back out.  The high sun was beating down on us and despite the 60 degree reading it felt like 85.  After see Chul use the dip and strip technique with success I tried doing the same.  I could not get any fish to stay on.  I missed a few and so did Tuck.  As the day went on and the infamous Upper wind started to blow I was getting awfully fed-up with this river that has always frustrated me.   Using my rerigged nymph rod I started noticing how difficult it was to cast, I blamed it on the wind until I noticed that I missed a guide when I rerigged.  Frustrated I decided to forget the fly rod and look for some ducks in nearby waters that maybe sheltering from the wind.  With a hour of light I left them and told them to call me when they were done and we'd meet up on the road. 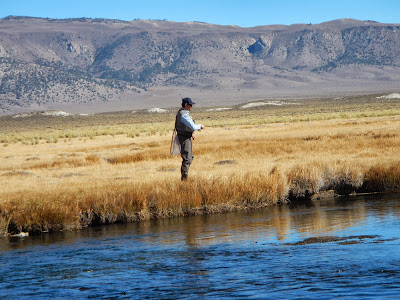 I checked out a nearby piece of water and glassed from high above trying to find me a few table ducks.  I saw none only shorebirds and cows.  I drove down and did find a doe and her offspring in the creek feeding on the weeds.  This sight alone was the best part of the day.  With no birds here I moved to the closed off section of the river hoping to see a bird or two.  This was the section I nearly got stuck last year in the snow, so I wanted to see this piece of water since I've never seen it before. 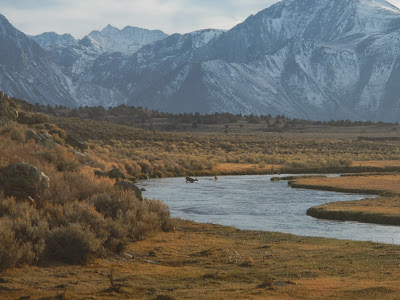 I drove to monument and saw a pair of fly fishermen fishing.  Perplexed I reached the sign and sure enough it was still legal to fish from monument to the lake.  I decided to grab the streamer rod and try my luck in the last few minutes of light.  When I reached the water in the distance I noticed a duck like silhouette.  Since I did not have my binoculars with me I could not tell what type of duck it was,  I headed back to the truck for the shotgun and binos.  When I made my stalk close enough to glass them I saw that they were coots.  Are you kidding me?  I just waste more light to go grab a shotgun for nothing. 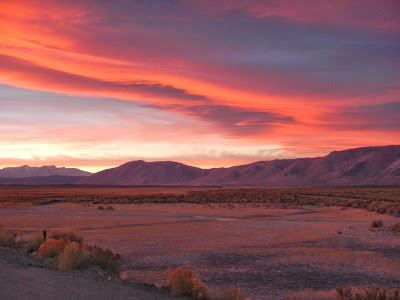 I made a few casts when Chul called me and let me know they were waiting for me at the bridge.  I told him I was just about leaving and made one last cast.  Fish on!  It felt hefty and was most likely one of the hogs coming out of the lake to spawn.  The very ones we were targeting.  Finally after all this frustration, success...Until my line went limp.  I stripped the line in and saw my fly line fluttering in the wind like a limp dick and I knew the leader failed.  Typical for the weekend so far. 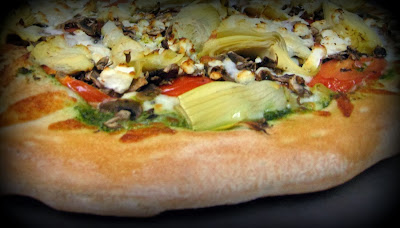 I drive out meeting the group at the bridge and we headed off to Mammoth for dinner.  One of Tuck's new roommates is from this area and suggested we hit up Giovanni's for pizza.  Having made no right decision all weekend, I took what seemed like an eternity to order.  I was not about to make a wrong choice for dinner.  Finally I made up my mind and had the Gio's pizza which was just a copy of the old Wolfgang Puck style of pizza made with pesto sauce instead of tomato.  The choice proved to be a good one my very few of the weekend so far.
Posted by gourmetsportsman at 8:10 AM