You Gotta Earn It! 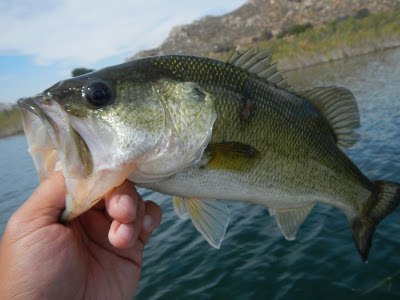 Working with only a few hours of sleep, I managed to hit Perris Lake once again with Chul.  John has been posting reports for weeks of epic topwater bites.  We were hoping for the same.  When Chul let me know he had Saturday free to fish, he asked if I wanted to hit up a local trout stream.  While I wanted to see how the resident trout population was doing I wanted to hit Perris once more before the bass moved out of the shallows. 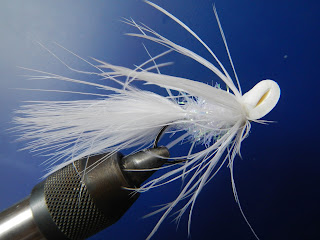 Despite the discouraging weather forecast we choose to fish Perris.  The sun was already poking through by 5:30 and when we arrived at the lake at 6am we had no opportunity to fish any grey light.  From the moment we set off I saw several boils which was an encouraging sign.  Our hope was the bass were still in the shallows taking topwater so we started throwing poppers into the garbage. We started at the island and moved to the last cove we fished on our previous outing.  I'm glad I suggested that we bring our sinking lines as backup in case the fish had moved to the deep water.  This proved a good decision later.
I started with a Folded Foam Head that I tied the other night with a weedguard.  After what seemed like a hundred casts with not even a look, I switched to a yellow foam head popper.  This fly despite tied smaller pushes more water.  After a few casts I in the maze of garbage I had a slam on my fly.  I couldn't get the hook set as I had no leverage as my line was laying on top of several exposed branches.  The carp must be in their spawn as they were making quite a ruckus in the tules.  We saw several leg long carp in this area.  I switched to a brown wooley bugger and tried to get one but none were really feeding.  We eventually moved out of this cove and headed to the eastside.  As we made our way there I switched my flies several times without so much as a bump. 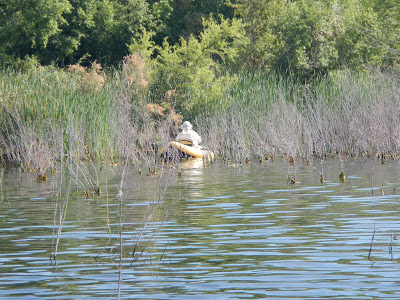 We found John and his buddy on the eastside working the jungle.  I asked how they did and while John managed a few on top it was tough for them too.  So at least it was not us.  The fishery is definitely gone to summertime bass fishing.  We entered one of the coves and I managed to muck up another topwater grab in the junk.  After trying to navigate through the maze of the jungle we decided we had enough of this and moved out to open water.  We rigged our sinking lines and started to go deep.  I must have switched flies two dozen times.   None of them proved effective today.  I tried small to large flies.  Just some of the flies I tried without any success:
﻿ 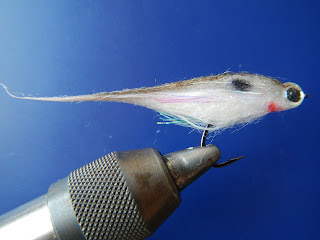 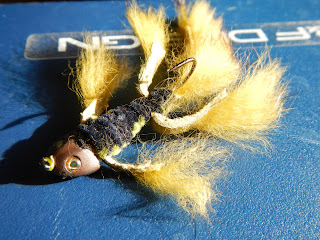 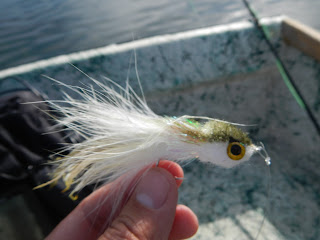 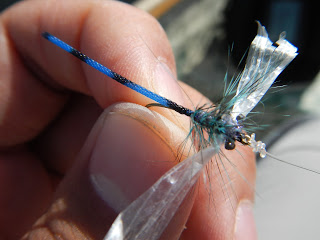 I was constantly checking the fish finder and whenever we reached an area that was holding fish I'd tell Chul to stop and we fished.  I made note of the depths and started my countdown keeping in mind the sinking lines sink rate hoping to get the fly in their face.  Again no luck.

We moved back to the island and since the lake is loaded with weeds the fish finder proved somewhat pointless so we just used it to read the contours.  Having seen all day bass taking damselflies I switched to my Fugly S.O.B. fly.  It's a stupid fly that whenever I smell the skunk coming I tie on and it seems to at least get one fish.  It has helped me avoid the skunk two weeks ago at Canyon Lake and several times at MVL among other lakes.   It saved me again.  After hours and hours of casting I finally hooked up on a bass.  I pulled him in with a big clump of weeds and bogaed him at 1.75 pounders.  I worked like hell for that fish.
We made a few more drifts around the island with no luck.  Chul did foul hook a bluegill in the head so he at least got to feel a fish despite being technically skunked.  With the heat beating down at us and the fishing beyond slow we decided to call it a day at 11:30.  As we drove the pram back to the launch ramp, the trolling motor began to die.  We used my trolling motor as Chul's old motor is officially retired and has seen its last piece of water so I was surprised to see the motor struggling.  It eventually died and I started rowing us back to the ramp but winds and the wake from speed boats proved too much as we only had one oar (because we lost the other on a previous trip to the bay and the oar feel out of the truck).  We decided to beach the boat and lift to the parking lot.  I made it to the beach and we lifted the boat to the parking lot.  It was brutal, we should have just tried to row the pram to launch ramp.  The heat, soft sand, the awkward grips on the boat made this brutally hard.  We finally got the pram out of there and I was spent and was overheating fast. 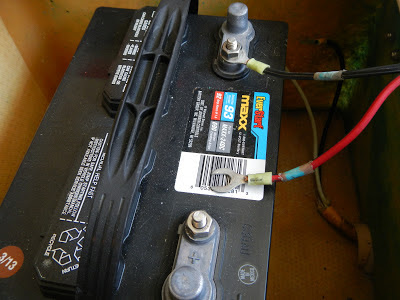 When we finally made it to Chul's house we checked what was left of the battery capacity.  As we lifted the seat to see the battery compartment we saw that the positive wire was disconnected from the battery.  No wonder the motor died.

Posted by gourmetsportsman at 9:38 PM