Carping In The Morning, Man Craft III At Night


I woke up Thursday morning at 3am and for whatever reason I could not get back to sleep. As I tried and tried to fall back to sleep I laid there in bed watching the sunrise around 5am.  By 6am I was fed up and packed the Rover with my carp gear and headed out to the local trash water.  I thought about packing the waders but I was too lazy to get it out and just took my wellingtons.  I later regretted that when I arrived at the water.  Water is high and muddy which is surprising for this time of year and since we are in a drought. Where the hell is all this water coming from?  With all this water it was going to be a pointless endeavor without my waders.  The water is up to the tules and on the far bank the vegetation is overgrown.  Despite that I managed to cross the river to the far bank as it would be my best shot at a fish.  The fish must be spawning as there was a lot of ruckus coming from the tules and there was a lot of fish along the bank rolling around.  I did manage to finally hook up on one that ran me around until I got too cute and popped the fly out of its mouth from pinching the line too tight with my trigger finger.  I got out of there about 8:30 when I realized it was pointless. 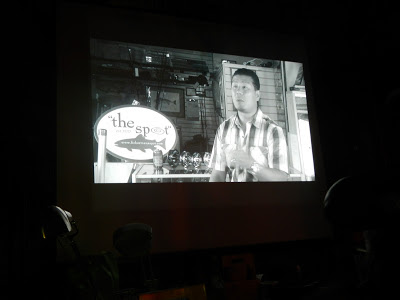 Later in the night one of our local forums which is moderated one of the members of The Calico Syndicate hosted a fly tying night, Man Craft Night III.   It was great fun and good to see some familiar faces and meet some guys I only knew by their forum handle.  We were also rewarded with a 17 minute teaser for their upcoming DVD towards the end of the night. The movie was supposed to be out already but has been delayed but when it comes out I plan on picking it up.  I did manage to tie a few shad patterns for Perris on Saturday.
Posted by gourmetsportsman at 10:41 AM