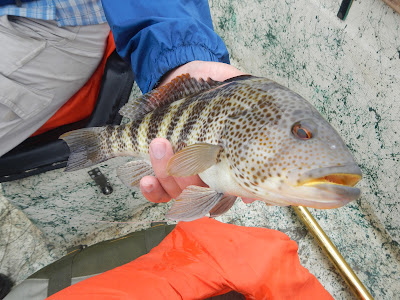 Upon returning from their debauchery bachelor party week in Mexico, Tuck emailed Chul and I that he and Joseph are abandoning our plan to fish Dixon Lake on Saturday.  I guess they had too much of the "donkey show" and were wiped out and needed some time to recuperate.  Without the boys I was in no mood to wake up early and head south.  Chul and I debated and decided to stay local.  After some discussion we choose to fish Newport Harbor.

Even though I took a hiatus from fishing this water, I know this water.  I really know this water.  If I call any water a "home" water, I suppose it's Newport Bay.  Last year I fished it twice and it disappointed me deeply.  Those 20-50 fish mornings I expected, those that Yosh and I experienced years ago didn't materialize.  Earlier this year I asked Capt. Bill Calhoun what's the deal with this place now and he let me know that the dredging screwed up the fishery pretty good.  Since last year's outing and hearing Bill's comments I've been somewhat skeptical of this place.  Nevertheless we decided to take the pram out to check it out.  Tides were not optimal but adequate.  The skies were overcast and it was somewhat cold.  Water temps are around 50 degrees.  Not at all optimal conditions. 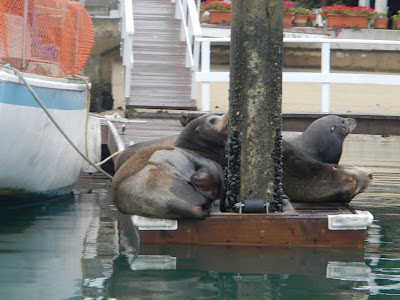 We managed to get on the water sometime after 7am.  Since Chul hadn't recharged his battery from our last outing, I lead him toward Coast Guard section and not to my usually starting point near the mouth.  I didn't know how much juice his had left in the trolling motor.  I didn't want another experience like Ed and I had rowing that pram against the tide back to the launch point.  It took a few hours before we got any bumps.  We were fishing in some eel grass so we were getting hung up on very cast.  On one cast I originally thought I was hung up but I saw my fly line moving away like a halibut take I set the hook.  At first I thought it was just the tide moving the fly line until I felt a shake and then the line went loose.  I stripped the line in and noticed that the leader had broke at a wind knot I was too lazy to fix earlier.  The rod went heavy and I initially thought it was just a hang up but knew that it was a fish after I noticed the break.  I put on a new leader and a white and pink hoonie fly on.  My go-to fly.

Now drifting through the moored boats my rod went heavy again.  And again I thought I might have hooked up on some eel grass and as I stripped line the rod finally shook.  I knew by the fight it must be a halibut.  I pulled him up and finally saw the 15 inch halibut.  Every time I tried to land him he ran.  He eventually turned the boat and Chul's line and mine crossed.  Right after I shook Chul's fly off my rod the halibut came loose.  After leaving this section and drifted near the Sherriff's dock I managed another halibut this time of smaller dimensions.  I managed to land this one. 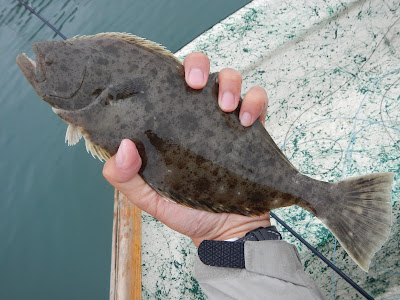 By this time the tide was starting to move albeit not as fast I would have preferred.  We drifted by the boat club and Chul foul hooked two baitfish sized fish.  Initially I thought they were corbina but after a closer look the mouth and head were obvious indicator that it was something else.  I looked at it again and thought perhaps a baby white seabass but the upper fins were different and there was no barring on the body.  We normally don't photograph our foul hooked catches but since I had no clue what it was I took a pic.  I emailed it to Ed and he let me know its a queenfish. 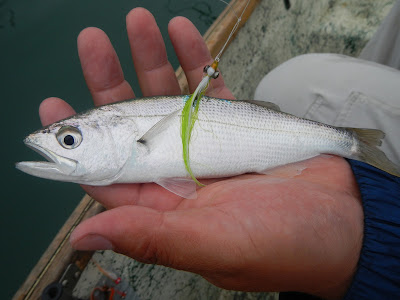 We moved toward another section of moored boats and after a few casts I managed a spotted bay bass just under a pound.  As with all saltwater bass this little guy pulled harder than his size would indicate.  My T&T 5 weight was bent to the cork and the little guy even managed to turn the pram as he fought.  After releasing him I made a few more casts and missed a quality bass.  It took hard and fast but I managed to miss it some how.  That fish was solid.  I gave Chul my last white/pink hoonie and told him to put it on. 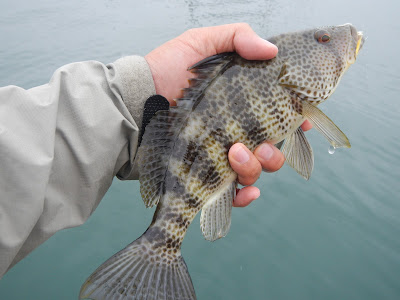 After a few drifts he managed to get one on and after he pulled him up from the depths it was another spotted bay bass.  It was about if not bigger than the one I just landed.  The Hoonie fly it never fails.  I've never been skunked on the Hoonie.  This is my favorite fly for the surf or the bay.  It is Ed's also.  We are firm believers in it because its a producer but also because it was created by our good friend.  The Hoonie has for whatever reason lost favor among the SoCal surf/bay fly fishers.  I'm not sure why that is, I guess it's because it's creator, Kyung Kim, is in fly fishing exile and that all his friends (Bill, Webb, Joe, etc.) including myself and Ed don't fish the surf much anymore, so no one is really promoting the fly.  All the new surf fly fishermen have gravitated to newer flies but they are missing out.

Chul and I fished some more and missed some nice fish before calling it quits after our casting deteriorated to crap.  After loading the pram into the truck we headed to Crow Burger Kitchen on the way out for a Crow Burger and duck fat French fries.

Posted by gourmetsportsman at 11:48 PM